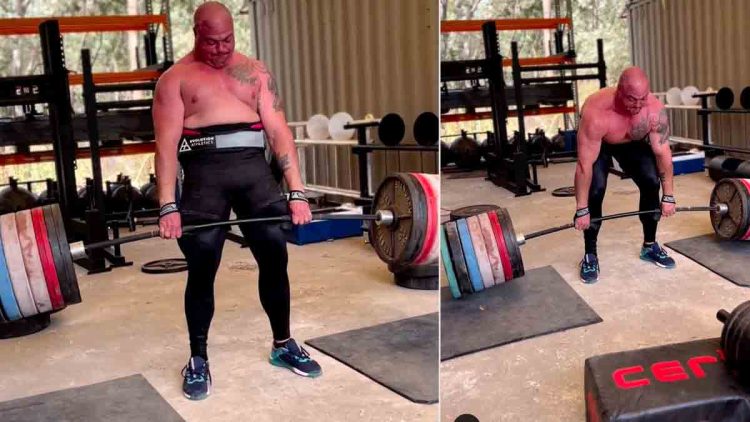 Mitchell Hooper’s impressive feats of strength have earned him a reputation as one of the strongest men in the world, and his recent win at the ‘2023 Australia’s Strongest International‘ competition is a testament to his incredible abilities. Although Hooper’s training regime is intense, he is always pushing himself beyond the limits of what is possible. So, just a few days after he competed, he went to training and set a new deadlift Personal Record (PR) of 420 kilograms (925.9 pounds).

Mitchell Hooper’s deadlift PR was raw by Strongman standards, as Hooper only utilized a lifting belt and lifting straps, missing out on the deadlift suit. This means that the lift was done without the use of any equipment that could assist him in lifting the weight. However, Hooper has experience in raw lifting, since he was a powerlifter at one point in his career. Ever since then, he has just continued building up on his deadlift strength, which often proves to be very beneficial for him in competitions.

Mitchell Hooper also revealed that this deadlift session marked the start of his preparation for the 2023 Arnold Strongman Classic, which is scheduled to take place on March 3-4 in Columbus, Ohio. Seeing that the last year’s champion, Martins Licis will not be there to defend his title, Mitchell Hooper will definitely be one of the favorites.

“Headed out to the compound after comp for a solid pull to kick off @arnoldsports prep.

A very busy year lies ahead for Mitchell Hooper, as he looks to take part in a large number of competitions. He started competing professionally just last year, so he is still building up momentum. However, he has already accomplished many things during his still short career.

Mitchell Hooper first made his debut at the 2022 World’s Strongest Man, where he impressively finished in tenth place. However, he just kept improving his placements with almost every following appearance. He went on to claim three consecutive podium finishes at the 2022 Giants Live Strongman Classic, World Open, and the Shaw Classic.

Having gotten the hang of things, Mitchell Hooper then managed to win the 2022 Arnold Strongman Classic UK, and the 2022 Giants Live World Tour Finals. Finally, ending the debut year of dreams, Hooper got third at the 2022 Rogue Invitational, at which he set a new Dinnie Stones Hold World Record.

Mitchell Hooper has already gotten another PR at the beginning of 2023, having crushed a 350-kilogram (771.6-pound) squat for two reps. Therefore, his improvement in the deadlift shows how versatile and dedicated he is. Just over one month remains until the 2023 Arnold Strongman Classic, and it will be interesting to see how Hooper will perform.