The three-time Classic Physique Olympia champ runs his viewers through an interesting back and bicep workout. 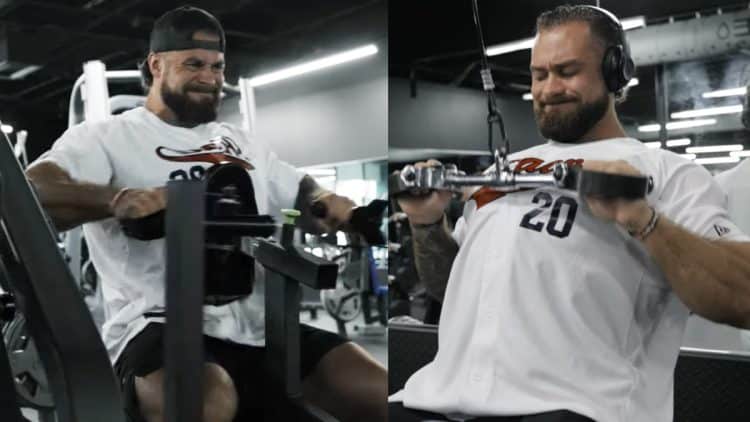 It has taken “C-Bum” a considerable amount of effort to maintain a physique of championship quality. Last year, he contracted COVID-19 and lost a great deal of weight as a result. The champion, however, is taking all his preparations very seriously and consuming a 5,000-calorie diet to make up for the weight he lost as a result of the virus. Even though Bumstead has endured hardships, he knows how to perform at his highest level when the time comes to advance training to the next level.

On July 12, 2022, Bumstead took to his YouTube channel to share his off-season back and bicep workout. During the run-through, he takes his fans through all exercise variations and his rationale behind doing them.

Chris Bumstead’s back and biceps workout

The reigning Olympia Classic Physique champ performed the following exercises in the workout:

Chris experimented with a new bar extension — narrower than shoulder-wide neutral grip — to kick off his back workout. He started with the lat pulldown machine, and the shorter grip enabled him to focus on the mid-back, which doesn’t receive as much attention with a wide grip.

In the video, Bumstead revealed that he was reserving the wide-grip pull-down for the second back day of the week.

“You gotta try new stuff sometimes to break outside your comfort zone.”

He alternated between lat pull-downs and dead hangs for his warm-up session.

Per the bodybuilder, the logic behind dead hangs is to warm up the scapula for the impending intense back workout. Chris used a reverse shrug motion for this movement. During the warm-up, the Olympia champ emphasizes the importance of mind-muscle connection in building muscle mass.

After warming up, Bumstead moved on to the bent-over barbell rows. This exercise focuses primarily on building thickness in the back. The bodybuilder used a shoulder-wide overhand grip for the exercise and emphasized the importance of core stability for this lift.

The chest-supported row is the second exercise in Bumstead’s back workout routine. He chose this as his next exercise to add a variation for the overhand grip and get a better range of motion.

“Second row, adding a variation onto overhand grip bent-over rows,” explained Bumstead. “I’m doing a neutral grip so I can a little better range of motion with the dumbbells really pulling far behind me.”

After crushing the incline dumbbell rows, Chris moved on to the third exercise of his back training routine.

Chris Bumstead is of the opinion that building a mind-muscle connection is important before attempting to lift heavy weights or hitting new PRs. The primary reason behind his belief is that it’s easier to build a muscle-mind connection with lighter weights than trying to do the same with heavy weights.

While performing the last exercise of his back training session, the reigning Olympia champ focused on controlled and steady reps to annihilate his lats.

Experts emphasize going all out on the last few reps when the muscles are fatigued, as the final few reps can make all the difference.

“I don’t count the sit-ups. I only start counting when it starts hurting because they’re the only ones that count. That’s what makes you a champion.” — Muhammad Ali

Notably, Chris did not do a warm-up of his arms as they were pumped after his back workout.

While performing the EZ-bar cable curl, he kept his elbows steady and focused on achieving a full range of motion (ROM). A full ROM enables optimal muscle engagement during the exercise. Bumstead performed a drop set in his final set to annihilate his biceps.

You can check out Chris Bumstead’s back and bicep workout below:

Chris Bumstead is expected to begin his prep for the 2022 Olympia soon as he aims to capture his fourth consecutive Classic Physique Olympia title in December.

Chris Bumstead likes to do his preps in a quieter gym and is playing around with the idea of moving to a more peaceful place for the upcoming prep. Per the bodybuilder, his inspiration for this idea comes from Rocky IV!