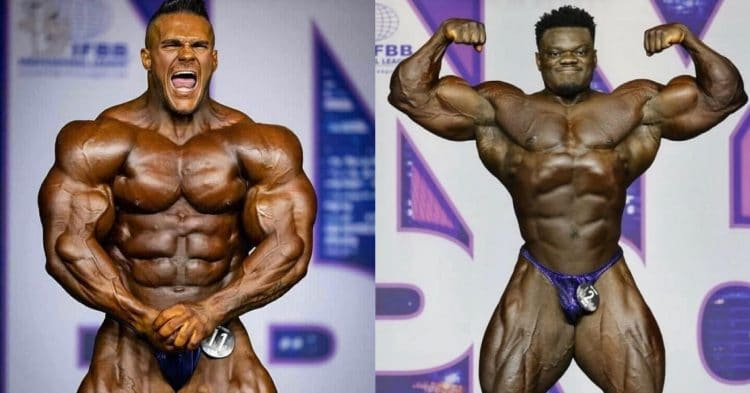 There was a lot of hype about the rivalry between Nick Walker and Blessing Awodibu ahead of the 2021 New York Pro. They have since squashed the beef to a certain extent, and Nick knows what Blessing needs to do to be successful moving forward.

For the weeks leading into the New York Pro, all the talk was about the beef between Walker and Awodibu. The two had gone back and forth on social media for a while leading up to the contest, and it brought the majority of the attention on the two of them.

Ultimately the rivalry would not be as exciting as some had hoped. While Nick looked as impressive as expected, winning the show, Blessing had some issues with his prep that left him coming in sixth place.

After the contest, it seemed that Nick Walker and Blessing Awodibu settled their beef. This was something that Nick confirmed, when speaking in a recent interview.

Here he explained that he expected things would not be close between he and Blessing, because he is levels above his rival. However, he did confirm that the two were cool, and even offered some advice to Blessing on how to improve.

“I knew it wasn’t going to (be close). Not to sound arrogant, but there was too many good people, and I’m way above Blessing’s level,” Walker said.

“But me and Blessing did talk backstage. Blessing is an awesome guy. I actually like Blessing a lot, I think he’s really cool. I think he has a very, very great structure to him, and I think if he took like a full year, possibly two and just really worked hard, he will be very dangerous in the future, for sure.”

It seems like Blessing plans on doing just that, as he has revealed that he will be taking a break for a bit. So this leaves Nick Walker to move forward, on to the 2021 Mr. Olympia, where he earned his invite to compete.

This will be the first time that Nick has competed on the Olympia stage, as he just earned his Pro Card last September. Nevertheless, he has high hopes for how he will do in his debut at the biggest competition in the entire sport.

That being said, Nick has no interest in fantasy matchmaking between he and the other competitors at the Olympia. He says that he has had people compare him to Big Ramy, but he does not understand how that makes sense.

“I just don’t understand why. Like they made one, comparing me to Ramy. That’s cool, but like why? They’re just pictures,” Walker said. “My goal is to stand next to him at the Olympia. I think that would be a really cool comparison.”

It would certainly be one of the most memorable Olympia debuts in recent times, if Nick Walker lands in the top three. On the other hand, anything is possible with such a promising young athlete.