Derek Lunsford and Hadi Choopan are in the lead during 2022 Mr. Olympia Pre-judging 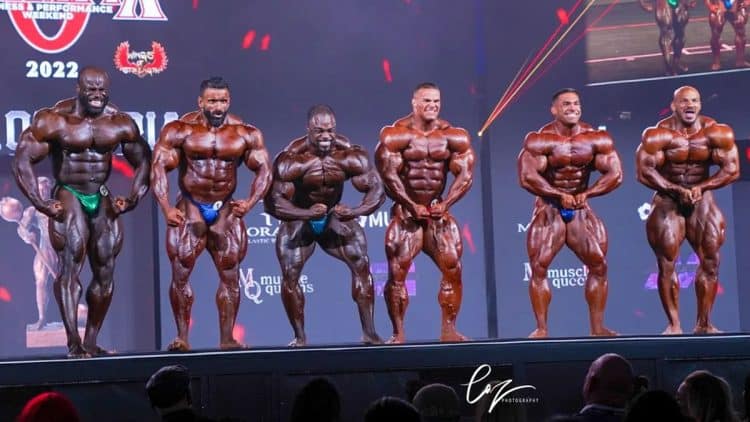 The 58th annual 2022 Joe Weider’s Olympia Fitness & Performance Weekend is taking place this week between December 15-18, in Las Vegas, Nevada. Around 30 Men’s Open competitors battled on the Olympia stage in hopes of earning the most coveted crown the sport has to offer.

In 2019, Brandon Curry won the Mr. Olympia title but was unable to defend it successfully in 2020. He was challenged by Egypt’s Mamdouh ‘Big Ramy’ Elssbiay, whose mass, muscularity, and conditioning pushed him to defeat. Since then, Big Ramy has held on to the Open title, defending it in 2021 in a close battle against Curry and third-place finisher Hadi Choopan.

Rivalries were one of the driving forces behind this year’s Olympia contest. Some of the men involved were Nick Walker, Blessing Awodibu, Michal Krizo, and Iain Valliere. Fans got to see them all perform on stage.

With so many challengers on a mission to dethrone Big Ramy, he brought the heat right out the gate. During the prejudging segment of the contest, the reigning two-time champion showcased great conditioning, but had to deal with a number of contenders pushing him.

Interestingly in the final callout, judges, including IFBB head judge Steve Weinberger, opted to keep Big Ramy on the right side instead of having him stand in the middle. Many fans believe Hadi Choopan and former 212 Olympia Derek Lunsford to be in the lead heading into the finals tomorrow.

In addition to those aforementioned, Nick Walker, Samson Dauda, and Brandon Curry also commanded the stage for most of prejudging. Walker looks to have brought an even better package than what he showcased at last year’s 2021 Arnold Classic. At the moment, it’s anyone’s title going into Saturday.