Peiman Maheripourehir is seemingly ready for the 2022 World Deadlift Championship. 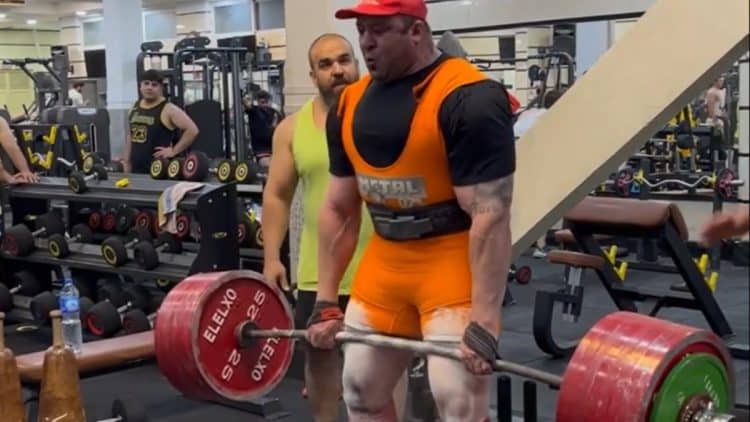 The 2022 World Deadlift Championship is without a doubt one of the greatest Strongman events of the year. It will take place on Aug. 6, 2022, at the Motorpoint Arena in Cardiff, Wales. So, the competitors are almost finished with their preparations. Peiman Maheripourehir also released some new training footage, which now makes the contest even more exciting. On July 19, 2022, Peiman posted a video to his Instagram page, which saw him crush a massive 452-kilogram (996-pound) deadlift double.

Peiman Maheripourehir performed the lift in socks, while he also used a deadlift suit, lifting belt, and lifting straps. Every piece of this equipment is allowed in Strongman and Peiman will most likely use everything in competition as well. Both of Peiman’s reps looked incredibly explosive and effortless, yet still looked very energetic afterward.

Peiman Maheripourehir will attempt to deadlift 505 kilograms (1,113.3 pounds) at the 2022 World Deadlift Championship. He will earn a prize money of $50,000 if he is successful in his bid. However, the achievement will arguably be more valuable, since only two men deadlifted at least 500 kilograms (1,102.3 pounds) in an official competition. Eddie Hall was the first one, having pulled exactly half a ton in 2016. Hafthor Bjornsson then pulled 501 kilograms (1,104.5 pounds) four years later, in an event sanctioned by WUS. Hafthor still holds the All-Time Deadlift World Record, but that could change in the near future.

The 2022 World Deadlift Championship will be a part of the 2022 Giants Live World Open. So, this will be Peiman Maheripourehir’s first major competition this year. He was supposed to make an appearance at the 2022 World’s Strongest Man contest, but some travel issues prevented him from going to America.

A lot of people are excited to see Peiman Maheripourehir compete, as he has proved numerous times that he deserves to battle against the best. Peiman competed at two WSM contests, and displayed amazing power, despite having to compete against the likes of Hafthor Björnsson, Big Loz, Terry Hollands, and more. Peiman placed 3rd in his group at the 2017 WSM, and 5th in his group at the 2018 WSM. He will now get the chance to write his name in the history books by setting a new Deadlift World Record.