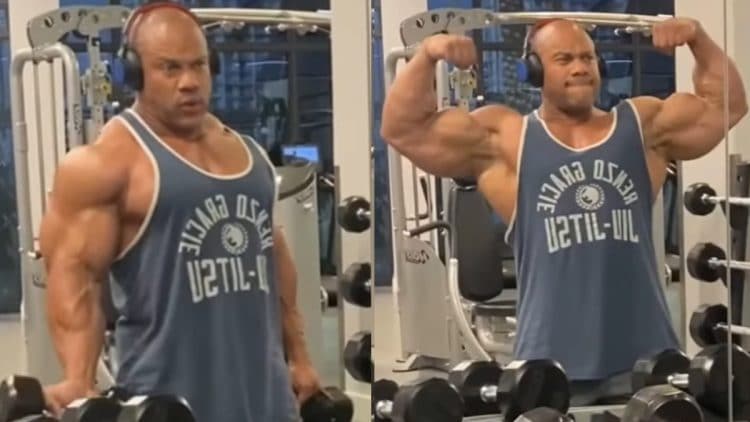 Bodybuilding legend Phil Heath recently shared a short workout clip. Heath is one of the greatest bodybuilders and won the prestigious Mr. Olympia title seven times in his career from 2010 to 2017. The only two bodybuilders to have more wins are Ronnie Coleman and Lee Haney (Eight Mr. Olympia wins). The 42-year-old was dethroned by the late Shawn Rhoden at the 2018 Olympia. However, he continued to hover around the top spot and finished third at the 2020 Olympia. He has not competed as a professional bodybuilder since that event.

Although he has not made any official announcement of retirement, it is not clear at the moment if Phil Heath will ever return to competitive bodybuilding.

Back in 2021, Phil Heath looked massively downsized in some of his appearances. A lot of people speculated that to be a sign of Heath’s retirement. However, it was later revealed that the massive weight loss was as a result of severe Covid-19 infection. Heath clarified this in a social media post.

Phil Heath’s weight went all the way down to 225lbs due to the Covid-19 infection. However, he seems to have recovered most of his mass over the last few months. In a recent workout video clip, Heath looks to be back in his original form and his physique looks very much similar to an active bodybuilder’s off-season Physique. Courtesy of Phil Heath’s personal Instagram account, you can watch the full video clip here:

LFG. FINISH THIS WEEK STRONG!” Phil Heath wrote in the caption to his post.

Phil Heath’s massive Physique could be proof that he is not ready to call it a career just yet. While making a comeback and going after the eighth Olympia title might seem like a lucrative and achievable goal, Phil Heath has already spoken on the matter a few months back and said:

“If you think about it, it’s not like… If you’re gonna do it, it has to be a three-year commitment. And what will you be giving up during those three years with business, relationship, family, all those things… Excuse the pun but is the juice really worth that squeeze?”

Looking at his assessment, it seems unlikely that we will see Phil Heath on the bodybuilding stage anytime soon, at least for competition. However, he already has a great legacy and checked almost every box when it comes to competitive achievements. As far as we know, Phil Heath will not be able to pursue a career in competitive bodybuilding anytime soon, if there is one at all.

What is a Superset? — Meaning, Types, Benefits, Drawbacks, and How To Use Them