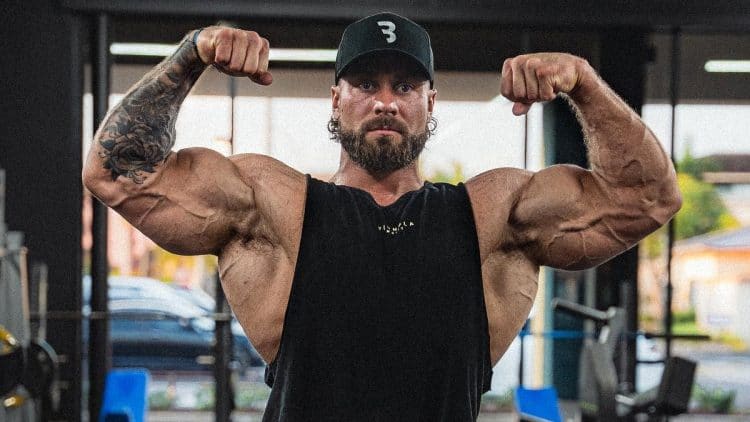 The 27-year-old suffered a severe Covid-19 infection around the Christmas of 2021 and lost massive amount of weight as a result. He made quick recovery afterwards and has kept his followers updated with his progress in the gym. Bumstead is currently in the bulking phase of his Olympia prep and the quest to win the title fourth time continues. Recently, Chris Bumstead shared his arms workout on his YouTube channel. In the beginning of the video, Chris Bumstead stated that he does not have a dedicated arms day all year round. However, he has incorporated a separate arm day in his routine right now.

“I definitely have the arm days in right now. I don’t always throughout the year but I just want them to grow more. And they’ve finally been growing since last year…” Chris Bumstead said.

The workout consisted of alternate triceps and biceps exercises. It is a safer and more effective way to train two different muscle groups. When we alternate the muscles worked in two consecutive movements, the muscle groups get the necessary time to recover before the next movement.

Chris Bumstead started the triceps workout with a superset of simple triceps push-downs with rope and rope overhead extensions. While explaining the reason for starting with this movement, Bumstead said:

“You get a pump from the normal set of triceps extensions and then you go overhead and stretch them. It gives you this crazy burn and feels super good.”

In addition to warming up the muscles, triceps push-downs effectively warm up the elbow joint. Elbows are critical in most of the arm movements and workouts. Hence it is advisable to incorporate triceps pushdowns into your arm workout warm-up. Bumstead performed two sets of this combo and moved on to the next exercise.

After warming up the triceps, Chris Bumstead warmed up the biceps with preacher curls. The 27-year-old stated that this is one of the exercises where he prefers to track the amount of weight he is lifting.

“I’ve been doing two plates into 25 for like eight-ish. Last year I was at two 25s on each side for eleven reps…” Chris Bumstead said.

Preacher curls is one movement that has benefited Bumstead a lot in growing the size of his arms. Therefore he starts the biceps workout with this movement on most days. He performed three working sets of preacher curls with a close grip and jumped on to the next exercise after a drop set.

“The closer grip makes me a little bit stronger and also, it targets the outside of the biceps the closer you are.”

Chris Bumstead next performed skull crushers on the incline bench to work his triceps. Instead of using a bar, Bumstead prefers dumbbells for this movement. He explained that his left shoulder is significantly weaker than his right shoulder. As a result, the right shoulder tends to compensate a lot for the other one when a bar is used. Using dumbbells for unilateral movements allows the shoulders to work equally. The 27-year-old performed three sets of this exercise and moved on to the next one.

After working his triceps, Bumstead shifted his focus back to the well rested biceps muscles. While the focus of preacher curls was to build biceps strength, seated biceps curls was to get a good stretch in the biceps. In Chris Bumstead’s word:

“In the last one, we were in a really strong position in front of your body leaning over. This time you’re kind of leaning back with your arms behind you to get a better stretch in your biceps.”

Chris Bumstead intended to perform only biceps curls in the beginning. However, he said that he felt a little weak at the last moment. Therefore he decided to superset the exercise with hammer curls.

“Got in a little more reps though and it felt good. It really gave that little final biceps burn. So…”

Bumstead performed hammer curls on the cable machine. As opposed to the free weights, the muscles are in constant tension during the positive and negative phase of the exercise. As a result, machine variations are more beneficial to bring about hypertrophy.

Bumstead’s training is getting intense as he aims to reach new heights in his physique.