The young up and comer is now coached by legendary bodybuilder and coach Milos Sarcev as he prepares for the upcoming Reno Nevada Pro Show. 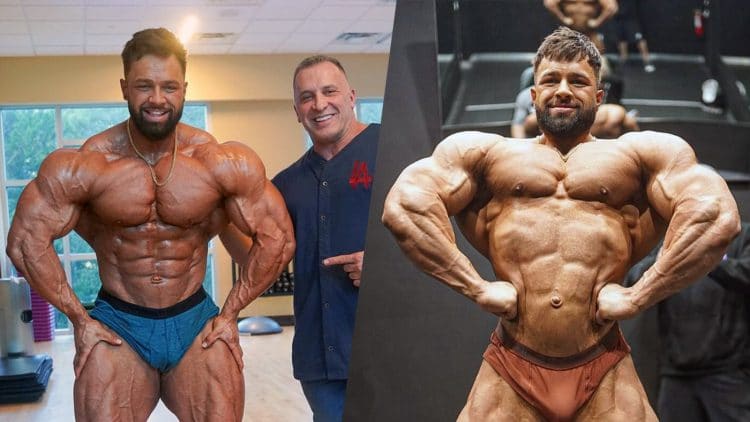 After a last-place finish (15th) for the second year in a row at the Olympia, Open bodybuilder Regan Grimes has enlisted the help of the well-known Miloš Šarčev.

Regan will be competing at the 2021 Reno Nevada Pro Show (Legion Sports Fest) that’ll go down October 22-24, 2021 in Reno, Nevada, and a win there would qualify him for the 2022 Olympia. Then he’d be able to really just focus on making crucial improvements for next year.

The 28-year-old up-and-comer from Canada has to be frustrated with his recent performances, knowing there’s so much potential there and there’s no doubt about it.

While Grimes is appreciative of coach and friend Dorian Hamilton, hiring Šarčev was definitely a much-needed move for him.

The two-time Mr. Yugoslavia and 1989 Mr. Universe winner from Serbia is a veteran of the sport, having placed top 5 in the Arnold Classic and top ten at the Olympia when he competed. His training methods and knowledge are highly respected in the industry.

Šarčev, as he explained in response to his new coaching role, was already a fan of Regan and now he’s stoked to be able to have the opportunity to help him take literally everything to the next level.

“Look at this Physique!!! Really!!! I’ve been a fan of @regangrimes since the first time I saw him 5-years ago…and I am now looking forward to push him to the next level – where he’ll be super “dangerous”…Literally – flawless physique with Mr. Olympia potential written all over him. It’s not gonna be easy…but it will be WORTH IT!!!
・・・
Day 2 in Las Vegas preparing for the Reno Nevada Pro Show! Posing practice with @iriskyle & @milossarcev 🙏🏼”

So far Regan and Milos have made significant changes all-around and with less than two weeks between shows (Olympia and Reno Nevada Pro), they’ve not wasted any time.

Now, the most common criticism of Grimes’ physique has been his conditioning. But the posing ability is also something he’s been known to lack as well.

Many feel he also needs to pack on more mass to be more competitive in the Open division and coming from the Classic Physique division. But size without quality definitely isn’t the goal.

Coach Miloš Šarčev has Regan doing twice a day cardio for 45 minutes, a lot of ab training, grueling posing sessions, and hitting the weights with new tips and techniques.

It’s not ridiculous to say that he’s made some visible improvements as well. But, as you probably know, peaking for a show isn’t easy, especially when you’re up against some of the best in the world. He’s done it before though to qualify for the Olympia.

One thing (or more than one thing) is for sure and that is, the pressure is on. But with the intensive posing sessions and overall modifications to his contest prep, we expect good things to come.

Check out the recent posing session and brutal leg workout Regan Grimes posted to his YouTube channel where you can follow his progress.

Regan also had the chance to practice posing with one of the all-time greats in 7x 212 Olympia champion Flex Lewis at the new Dragon’s Lair Gym in Las Vegas, Nevada.

What’s Next For Regan Grimes

Regan Grimes and fans alike have experienced much frustration with his previous two Olympia showings that’ve ended in last-place finishes.

The former Classic Physique competitor had a lot of hype behind his name and while he still does, it’s understandably dimmed down a bit but this could be the year things turn around for this young genetically blessed talent.

Hiring legendary competitor and coach Miloš Šarčev was definitely a big step forward though and it’ll be interesting to see how he does in upcoming competition.

Be sure to check back for an update on his placing at the 2021 Reno Nevada Pro Show.

In a sport as tumultuous as bodybuilding, it's always a breath of fresh air when athletes discuss the finer details...

Miloš Šarčev is a retired former IFBB professional bodybuilder and coach from Serbia. His most notable achievement was winning the...