In addition to his 2022 Olympia predictions, the seven-time Mr. O discussed his upcoming commentary duties and why he regrets returning to the sport in 2020 after hernia surgery. 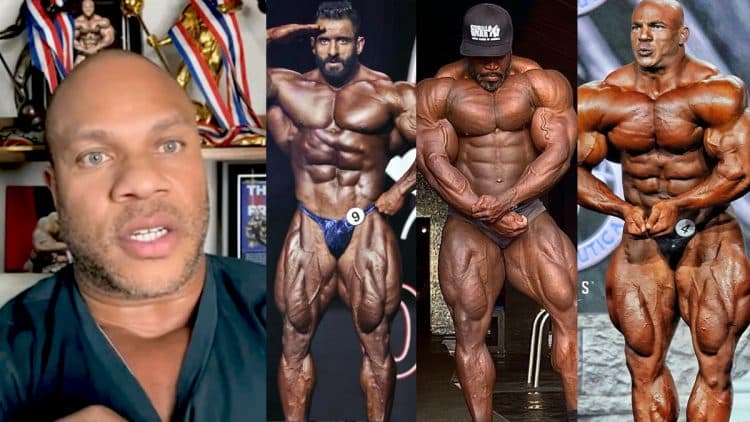 Bodybuilding legend Phil Heath is one of the most decorated champions in the history of the sport. In a recent video on the Muscular Development YouTube channel, Heath discussed his commentary role at this year’s Olympia contest and gave his predictions for who he believes could win the show.

Despite many in the community expecting a competitive bodybuilding return, seven-time Mr. Olympia Phil Heath will commentate at the 2022 Mr. Olympia instead. Given his history of success at the event, Heath’s opinions are highly valued by other bodybuilders expected to compete at the prestigious show.

With 16 weeks until the biggest bodybuilding contest of the year, the Open class, a division Heath once ruled over, continues to showcase high-level talent. A few weeks ago, defending two-time Mr. Olympia Mamdouh ‘Big Ramy’ Elssbiay posted a massive physique update, where he was pushing the scales at 337 pounds. In addition to Ramy, former champion Brandon Curry, and Hadi Choopan are also making improvements.

Bodybuilding legend Jay Cutler has said this year’s Olympia contest has the potential to be one the most competitive in the show’s history. Younger talent is on the rise, like 2021 fourth place finisher Hunter Labrada and New Jersey’s Nick Walker, who both are approaching 300 pounds.

Meanwhile, rookie Andrew Jacked, Flex Wheeler’s protégé, is headed to the Olympia stage and the newly signed NPC bodybuilder, Michal Krizo, plans to do the same if he earns his pro card next month. The exciting lineup has prompted Phil Heath to take a look at the landscape as he eyes his duties as a commentator for the contest later this year.

Heath gave his thoughts on assuming a new role as a commentator for Mr. Olympia.

“I think it gives them an opportunity to hear what a seven-time champion thinks and who is actually been through it. Now, if they hear something they don’t like, they have to ask themselves probably a couple questions — number one, is it true? Is it true, if you’re not in shape is it true. Look at yourself. Ask yourself. Usually, 99 percent of the time we all say, ‘could I have done a little more during prep,’ usually a lot of people raise their hands,” says Phil Heath.

His biggest priority as a commentator will be helping the athletes and giving fans an enjoyable experience.

Heath on Who Can Defeat Big Ramy at Mr. Olympia: ‘You Got to Go with Brandon and Hadi’

According to Phil, anything can happen if Big Ramy leaves the ‘door open’ for his competition later this year. He added that in order to win consecutive Olympia titles, judges favor bodybuilders who continue to make improvements.

“The question is — does Ramy have to win four, five, six to be considered a great champion, I don’t think so. If he wanted to try to do that, we also have to look at longevity with his body,” Heath said. “When you’re that big and you’re trying to compete at that level, you always have to go one percent better every time, or you’re at least attempting to do that.”

When asked who he believes could topple Ramy, Phil pointed to his former teammate Hadi Choopan and last year’s runner-up finisher Brandon Curry.

“You gotta go with the top three. You got to go with Brandon and Hadi. That was who was in the mix last year. I would say based on what I saw recently, Hadi. I’m not biased because I’ve worked with Hany. That dude has some serious muscle. All it takes is for Ramy to slip. We saw that happen last year. He wasn’t better than when he won his first one.”

“Usually, if you leave the door open for two years, things can happen right. This is what sucks by not being there live and just seeing pictures and some video. I haven’t seen Nick Walker in person. I’ve not seen him compete in person. Of course, you’re going to lean towards him being a disruptor. No question about it. I believe he is the youngest disruptor out of anyone in the world.”

“He’s definitely someone you got to keep your eye on. I also think William Bonac, I’ve always mentioned William even before anyone knew who William was. WIlliam is the guy, if he puts it together with Chad, he can beat some guys. He has more muscle maturity in the right places, he just has to nail it. His muscle density per square inch, I’ve seen it — it’s pretty gnarly.”

With the hype surrounding Slovakian bodybuilder Michal Krizo, Heath discussed his potential. He believes Krizo has ‘holes in his physique,’ but said once he works on his posing/presentation, he could be a future threat.

“What I saw, he looked great. When he was at Gold’s Venice and Jay was with him and stuff, I thought he looked really good, but I do see holes in the physique. I see holes in everything right. I think he definitely needs to work on his presentation. Even when you research his contest videos, he can’t hold poses very long. Just look at the tape.”

Phil said that in the IFBB Pro League, judges will run bodybuilders through a number of call outs, especially if they suspect an athlete is struggling to maintain poses. Moreover, Phil suggested that photographers catch every angle, even when the shots aren’t flattering.

“He has to focus more on that than anything else because in this league, they will run your ass through some call outs. Those pictures are unforgiving, the photographers just so happen to post that shit that don’t make you look great sometimes. It’s the name of the game. You have to expect, when you’re up there posing, you let up on anything… someone is going to capture that.”

Heath Regrets 2020 Olympia Return: “Should I have Taken a Year or Two and Then Come Back, Absolutely”

“In retrospect, I should have not competed in 2020, came back in 2022 or 2023 fully recovered. In my opinion, I probably would have been right there to win. Life has no rehearsal and I don’t like playing those games. You can die tomorrow, what do you want to do right now. Here’s the best part Ron: what if I would of won? People would have talked shit, but it wouldn’t have mattered.”

During his dominant reign, Heath looks back with pride because he was able to stop someone as good as Kai Greene from winning a Sandow trophy.

“I’m thankful for what my body has been able to withstand. I’m thankful for the fact that I was able to compete against in my opinion, some of the greatest bodybuilders our sport has ever seen. I mean, I prevented a guy like Kai Greene from being able to win one Olympia.”

In 2020, Phil remembered giving some advice to Ramy after he won his second title. He told the reigning champion if he wants to hold on to his title year-after-year, he has to come back with noticeable improvements.

Even though Heath plans to commentate at 2022 Mr. Olympia, there are still many people discussing his potential return to bodybuilding. During his time away, Phil has maintained his size while remaining active inside the gym.

While he won’t be competing, Phil Heath’s presence will still be felt at 2022 Mr. Olympia. Heath believes if Ramy leaves the ‘door open’ again, there are a number of bodybuilders looking to take his title away, like Curry and Choopan.

RELATED: Hany Rambod on Phil Heath Winning Another Olympia Title: ‘I Never Say Anything is Impossible, but that Would Be Very Difficult