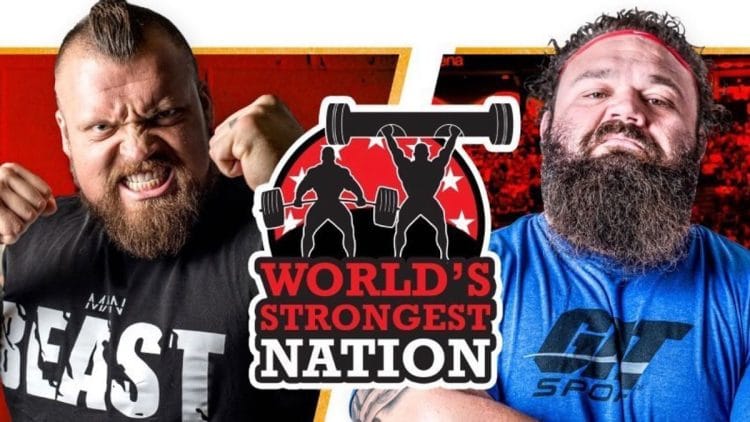 To the pleasure of all Strongman fans, on November 26th, 2022, we will get to see the 2022 World’s Strongest Nation contest. It will be held in Liverpool, England, and Team USA will battle against Team UK for a very prestigious title. As we have eight months remaining until the competition, neither the events nor the names of the team members have been revealed yet. However, the team captains have been announced, and they seem like a perfect fit for this competition.

The Team USA will be captained by ‘The American Monster’, real name Robert Oberst. However, Eddie ‘The Beast’ Hall will come out of retirement with the aim of leading Team UK to victory. The two men are friends, but they also share a fierce rivalry. They filmed a TV show called “The Strongest Man In History” back in 2019. At one point in the show, they revealed that there is always a desire to outperform one another and that the rivalry was present throughout the majority of their careers.

On March 14th, 2022, Robert Oberst gave us an introduction and revealed his intentions for the competition in a YouTube video. Oberst revealed that he and Eddie will choose strongmen and strongwomen from their countries.

“Eddie Hall is coming back to get his ass kicked by ME.”

Oberst wants to defeat Hall by a significant margin and take the credit for sending him back to retirement.

“He (Eddie) is probably one of the worst representations of Strongman in the history of the sport… One of my biggest rivals.”

Oberst also expects to be injury-free, so that he is able to put on a great show and win the competition. He also stated that after this, his plans are to compete in the 2023 WSM, and take back the Log Press Record. If he is successful with these plans, Robert Oberst will probably retire.

Courtesy of Robert Oberst’s YouTube channel, you can watch the video here:

Robert Oberst has established himself as one of the central figures in the sport. Although he is incredibly strong, Robert has not managed to win any major titles, but his cheerful personality and a great sense of humor got him a huge following. He has been active in the sport since 2012, and took part in 8 World’s Strongest Man competitions. His best placing came in 2018, as he finished in 8th place.

Eddie Hall is currently arguably one of the most famous Strongmen and fitness figures in the world. He will fight against Hafthor Björnsson in a few days, and the boxing match got everyone excited. However, he has had a very successful Strongman career. Hall’s greatest achievement was winning the 2017 WSM. Eddie was also the first person to deadlift 500 kg (1102.3 lbs). He has also won 13 additional major Strongman competitions. He retired from the sport in 2017, but is coming back for one last occasion.

Robert Oberst was very persuasive when saying that this is not just for fun, and that their desire to win is genuine. Especially because the guys will represent their teams and countries. Robert Oberst has started preparing, and Eddie Hall will follow his steps after the boxing match.

Gyno in Bodybuilding: The Ultimate Guide

Do Squats Work Your Abs?