American Strongman competitor Robert Oberst swears by the front squat as the best overall movement for most athletes. 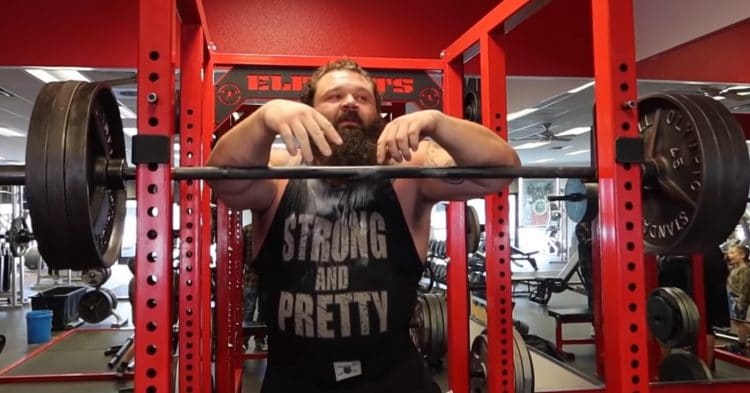 Who better to take lifting advice from than an elite Strongman competitor who, during his first Strongman training session, unofficially broke the amateur log press record.

Oh, and we almost forgot to mention that he earned his Pro Card after just four-six months of practice! But that’s beside the point, of course.

Cali’s Robert Oberst hasn’t quite reached the level of Strongman success that many of the other top guys have; he’s made up for it with his gift for show business (larger than life personality) and extreme work ethic though. Oberst has and still does inspire so many people, athletes or not, to go after their dreams and never give up.

The 6’8″, 400+lb behemoth definitely knows what he’s doing in the gym (his two World’s Strongest Man finals appearances certainly prove that) and recently, he shared a video on his YouTube channel, walking his viewers through proper front squat technique.

What was particularly intriguing about this episode wasn’t just that he shared proper front squat technique to help you maximize strength, power, and explosiveness; it was that he said the front squat is the best overall lift for athletes.

He’s not necessarily wrong or far off though as this compound variation does have many advantages that make it a must-have lift in any serious training regime.

“It’s one of the best lifts there is.”

If you’re new to training or aren’t as familiar with the differences between the front and back squat, well, it’s significant enough to mention.

Oberst explained that it forces good form and proper positioning and it can be safer than the back squat because you can bail the bar with less risk of injury. He still believes the back squat should be a staple, but he thinks the front squat is the slightly superior option overall.

Read also: Back Squats Or Front Squats: Which Builds More Muscle And Strength?

How Robert Oberst Does The Front Squat

Now to the technique. But first, you should know that the following tips are based on how Robert Oberst performs this exercise. That doesn’t mean everyone has to do it exactly as he does.

So firstly, a lot of people walk up to the bar, grip it, and then shove their elbows forward and up so that the upper arms are parallel to the floor… well, that’s not what Oberst does.

He doesn’t like the position that this places the wrists in.

Rather, he starts by with the bar resting above his clavicle (and hanging his beard over the bar). He then crosses his arms and pushes his thumbs into the bar.

This protects the wrists and keeps the elbows up, both of which you’ll quickly learn are important for effective front squat performance.

He explained that teaching yourself to push into the bar will feel uncomfortable the first few times you do it, and you may think something isn’t quite right. But he insists that it’s important.

And how generous of Oberst to share even this much of his knowledge because, at one point in the video, he made it clear that he’d never share all of his training secrets. That is, of course, because he is still competing and wants to have any edge that he can over his competition (we don’t blame him one bit).

That was about the extent to which Oberst talked about front squat form but it’s still great advice nonetheless.

Oberst admitted to not being as flexible as he wants to be in the deadlift and he believes the front squat can help a lot with that. The reason being, again, is that it forces good posture.

So he carried on with his training, working up to a very impressive 5 plates on each side, but only because it was his first front squat session since World’s Strongest Man.

Otherwise, this monster is doing over 600 lbs for this movement.

He also keeps emphasizing how good the front squat is, and how it’ll “make an athlete out of you“.

To end, Oberst did some accessory work like walking lunges where he also talked a little about Strongman competition and how it’s moving more toward speed, athleticism, flexibility, etc.

Of course, you have to be incredibly strong too but Strongman isn’t just that, as he explained the log press at this year’s World’s Strongest Man was 30 lbs lighter than it was the previous year.

So he understands how crucial it is to be well-rounded if he’s to be as competitive as possible.