Roelly Winklaar and Larry Wheels were seen hitting Oxygen Gym together for some arm training, with each man looking incredible 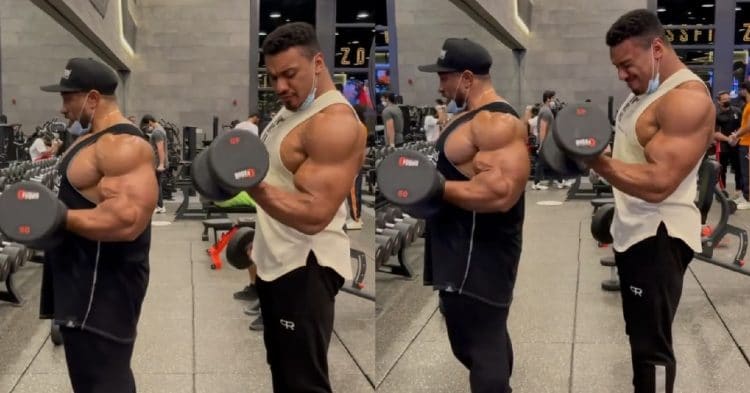 By all accounts, it seems that Roelly Winklaar is gearing up for a return to the bodybuilding stage in the near future. Ahead of this highly anticipated comeback, he was seen hitting some arm training with none other than Larry Wheels.

Winklaar has not competed since the 2019 Yamamoto Pro, where he won after a fifth place at the Olympia a few weeks earlier. This show qualified him for the 2020 Olympia, but he was unable to compete after failing a COVID-19 test prior to the event.

Really has not competed since then, and was only recently seen on stage for a guest posing. That being said, as the 2018 People’s Champ is still one of the best bodybuilders in the world, with some even feeling like he has what it takes to dethrone Big Ramy.

Now Roelly Winklaar is seemingly gearing up to make a return to competition. He has not revealed when he plans to compete, but he has been hitting the gym hard to knock the rust off, and get back into prep mode before making that return to action.

A recent post to his Instagram showed that Roelly is not training alone. The video he shared sees him at the Oxygen Gym getting some arm work in, alongside powerlifter, bodybuilder, and arm wrestler Larry Wheels.

“Using my arms as scale to show how big @roellywinklaar is” Wheels wrote to caption his video training with Winklaar.

This was an interesting collaboration to say the least. Larry jokes that his arms are only there to make Roelly’s look bigger, but frankly Roelly does not need any help making his arms look gigantic.

It is clear that Winklaar is starting to get back in the swing of things, with the recent work he has been doing. Aside from this session with Larry, he also shared an update where he crushed a shoulder workout.

The workout, which Roelly encourages his followers to try, is made up of a combination of machine sessions, dumbbell exercises, and some plate work. It is clear that this is giving him a solid pump, as he works through the various sets.

Judging by the way Roelly Winklaar is looking, he seems to still be in the relatively early stages of prep. So it seems likely that he has a summer time return in mind, but time will tell where he finally lands and if he is able to earn that invite to compete at the 2021 Mr. Olympia.