The bodybuilding great has acquired 30lbs of mass and accredits the recent size increase to enduring less surgeries. 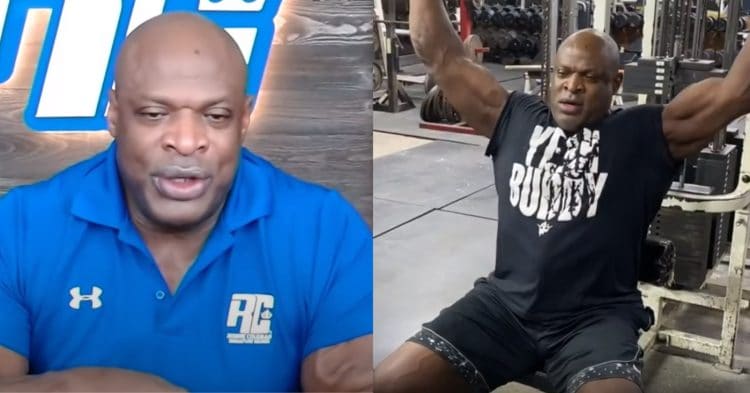 As an eight-time winner of Mr. Olympia, there are few bodybuilding hurdles that Ronnie Coleman has been unable to conquer. With the help of stem cell therapy, Ronnie Coleman has recently shared that he has been able to add 30lbs of mass to his overall body weight.

With an audience of over 1.2 million subscribers on YouTube, Ronnie Coleman’s following is as gargantuan as his physique. Coleman took to the streaming platform to speak on the recent size increase he’s enjoyed thanks to the lack of surgeries as of late.

On Wednesday, Ronnie Coleman spoke on his YouTube channel to discuss his recent physique change thanks to stem cell treatments and enduring fewer surgeries.

“Going pretty good. Ronnie Coleman said. I’m training six days a week now, about an hour, hour and half a day, but I think most of it comes from me doing the stem cell treatments because I’ve had three so far, and every one I noticed that, you know I put on a little bit more size after each one, and less pain, and I just feel so much better.”

“I got a lot more energy than I used to have. So I have put on about 30-pounds. I went from like 255lbs to 285lbs somewhere in there. I had to weigh myself about ten times to be sure. It’s been a long time since I’ve been that heavy.”

Ronnie Coleman acknowledges that working out six days a week is obviously a factor in his recent growth. However, Coleman believes his energy was restored in large part because he is no longer suffering from the ill effects of back-to-back surgeries.

READ: Ronnie Coleman Shares How He Stays Motivated To Train At 57 Years Old

“Yeah, yeah because I’m starting to get back a little to normal a little bit you know. It’s been a while since I haven’t had surgeries like back-to-back-to-back. Coleman continued. You know, I’ve had thirteen surgeries the last five years, and I was going and I had three in one year. So I was always in the hospital for a while, I had back-to-back surgeries all the way up to 2020. That was the last time I had one.”

When asked if his diet was responsible for his 30lbs weight increase, “GOAT” was adamant that the stem cell treatments are what helped treat the numbness and pain he suffered as a result of multiple surgeries. After those issues were nipped in the bud, Coleman attests that his training became more consistent.

“No. I’ve always eaten the same thing. It’s not the diet. It’s like I said, not having to have those surgeries back-to-back you know. Me being able to work out consistently, you know for almost two years straight. Coleman stated. One in there, then six days a week, also that the stem cell had to do a lot because I used to be in a lot of pain all the time, and now it’s like, you know, it’s pain that I can take whereas you know, it’s not like I’m even feeling it.”

Coleman is tied with Lee Haney for the most Mr. Olympia wins ever recorded (8) in Men’s Open competition history. In his later age, he remains a permanent fixture in the bodybuilding community. Earlier this year, Ronnie Coleman received the coveted Lifetime Achievement Award at the Arnold Classic 2021.

Ronnie Coleman admits that numbness and weakness became an overarching problem in his life. Coleman’s doctors indicated that nerve regeneration takes around two years and that was precisely when Coleman started to feel better.

Coleman has trained most of his life, so recovery has become detrimental to his health. After taking into account the numerous surgical operations he’s gone through, Coleman appears to be in great shape. After seemingly packing on 30lbs of solid mass, Coleman accredits his recent gains to stem cell therapy and fewer surgeries hampering his body.