No Result
View All Result
MotivationOP-ED

We all know "The King" was strong? Today, we put a number to the madness. 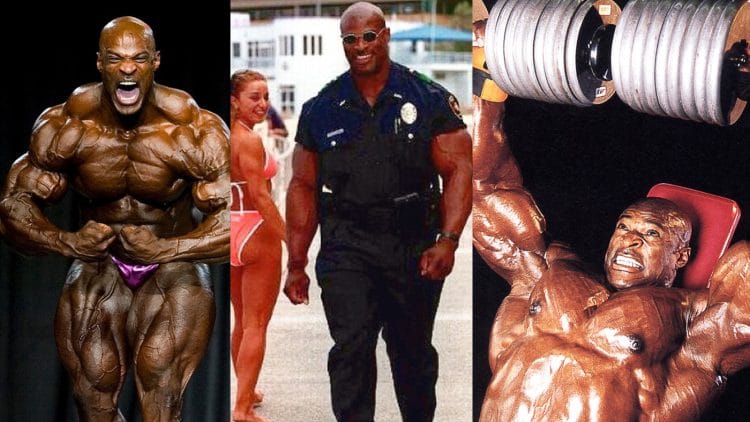 “Everybody want to be a bodybuilder, but don’t nobody want to lift no heavy-ass weights, but me.” – Ronnie Coleman

Now that is some opening line. Not only was Ronnie Coleman one of the biggest, but he was also one of the strongest bodybuilders of all time.

For many people, muscle mass and strength go hand-in-hand. The comics we read growing up featured swole heroes with superhuman strength. Their backs were so wide that even their capes looked small, bicep peaks so high, their sleeves almost ripped apart as they uppercut the bad guys, thighs so big, they could ignite a fire as they walked. Okay, maybe the last part was a bit exaggerated, but you get the point.

When most of us thought no human could ever be that big, the real-life “Vita-Ray chamber” a.k.a Metroflex Gym, Texas, gave us Ronnie Coleman.

While comic geeks were expecting spaceship-making billionaires like Elon Musk and Jeff Bezos to finally reveal they were behind Stark Industries, we saw the emergence of the Incredible Hulk from an unlikely place, the APD – Arlington Police Department.

The ex-cop is one of the strongest (if not the most) Mr. Olympias of all time. Ronnie Coleman lifted heavy and believed that moving big weight was the best way of putting on muscle mass.

Usually, bodybuilders have a favorite lift where they are especially strong. Tom Platz had the squat, Franco Columbu was known for his deadlift, Larry Scott made the preacher curl famous, but there is no particular lift associated with Ronnie. “The King” was ridiculously strong in every exercise.

Since bodybuilders preach lifting with the correct form and focus on muscle contractions and mind-muscle connection instead of the weight on the bar, it is usually believed that bodybuilders are not as strong as they look. But Ronnie Coleman turned this assumption on its head.

If you trained in the Mertroflex Gym in the 90s and heard “ain’t nothin’ but a peanut” or “yeah buddy!” you knew shit was about to go down.

Coleman’s signature phrases have been adopted by hardcore lifters around the world. Do not believe us? How often do you hear a guy in your gym cry out “light weight, baby“ before he lifts ridiculously heavy? These phrases have transformed into war cries. When a lifter utters these words, he is ready to put everything on the line.

Before he won his first Mr. O title in 1998, the GOAT competed in the Texas Deadlift Classic annually between 1991 and 1994.

To put this into context, Arnold Schwarzenegger deadlifted 675 lbs at 20 years old in a 1968 powerlifting meet.

Trivia: Besides the eight Sandows on his trophy shelf, Ronnie Coleman has the second-highest pro title wins under his belt (26).

Before the advent of YouTube and Instagram, bodybuilding fans followed their favorite athletes through DVDs and magazines. Ronnie Coleman has featured in seven films/documentaries between 1998 and 2018.

The best part about these videos, you ask?

Coleman ups the ante in every successive DVD.

Weeks before stepping on the Mr. Olympia stage in 2000, Ronnie was filmed training in the Metroflex gym in “Ronnie Coleman: The Unbelievable.”

In the training DVD, Coleman deadlifted:

Use our neat One rep max calculator, and you would find out that The King could probably do 823 lbs for a single.

Compare these to other bodybuilders who stop lifting heavy at least four weeks out of a big show to minimize the chances of injury during training.

Fascinatingly, the police officer performed the monster lifts without wearing a power suit or low-soled shoes. Instead, he did them while wearing a tank top, tights, and thick-soled boots. He should have gotten a ticket for this if you ask me.

Must Watch: Ronnie Coleman Reacts To His 800lbs Deadlift

Coleman got his craziest ideas just before Olympias, and 2003 Mr. O was no different. In a training video shot before 2003 Olympia (Ronnie Coleman: The Cost of Redemption), the 8X Olympia champ wanted to duplicate his deadlift record (800 lbs for two reps) in the squat.

Attempting an 800 lbs squat just before the Olympia showdown was a crazy idea, especially for a bodybuilder on top of the sport and going for his sixth consecutive title.

To prepare for the ginormous squat, Ronnie Coleman bought a squat suit, something he had never previously worn. As I held onto my breath for good luck, Ronnie got into position under the 800 lbs bar wearing the squat suit, a weightlifting belt, and knee wraps.

As he unracked the bar, we could see veins popping out of his bald head and neck. We knew it was showtime when we heard, “yeah, buddy!”

He came in a little high on the first rep, and he knew it. Being the champ he is, he went three inches deeper on the second repetition, clearly breaking parallel.

800 lbs for two reps. Put these numbers in our 1RM calculator, and it would tell you that he could do 823 lbs for a single.

Ronnie later claimed that he could have gotten more reps if he was not so fixated on the double.

It was no surprise that Ronnie Coleman won the 2003 Mr. Olympia supersized (nearly 300 lbs).

Chronicles of Ronnie Coleman and The Squat

During a 2005 Flex magazine shoot, Coleman squatted 585 lbs for 10 reps. All of those 10 reps were deep, and Ronnie squatted until his nose bled. In today’s Instagram-crazy world, Ronnie Coleman would be Larry Wheels but with 8 Mr. Olympia titles.

Pull out the trusty 1RM calculator again, input the details, and it would tell you that Ronnie could do 780 lbs squat for one rep. In other words, Ronnie not only managed to maintain his strength after his initial 800 lbs squat attempt in 2003, but he could now probably do the lift without wearing a squat suit.

Many lifters would agree that the front squat is one of the toughest squat variations. Not only do front squats put more tension on the quads as compared to your glutes (the strongest muscle group of your body), but they are harder to execute as they demand more from your core and anterior muscle chain.

Not to mention, Ronnie Coleman was one of the meanest front squatters in his prime. In 2000, The King did a mind-boggling 585 lbs front squat for four reps.

We know you have been thinking about the hack squat. In a training video from 2000, Coleman did a 780 lbs hack squat for eight reps. The 1RM calculator would tell you Ronnie could have done 968 lbs for a single.

In the training video from 2003, Coleman can be seen benching 495 lbs for five reps. The 1RM calculator indicated a one-rep max bench press of 557 lbs.

The 1RM calculator indicates that Coleman could have crushed a 280 lbs dumbbell for a single.

Note: Ronnie did not use any help lifting the monster dumbbells into position in any of the sets mentioned above.

Related: Ronnie Coleman Flashes Back To Time As A 330lb Mass Monster: ‘This Is The Biggest I’ve Ever Been!’

Now that we have the three big numbers and the possible 1RMs, let us enter the metaverse and run some simulations. On second thought, we lack the required tech, so we are just going to add up his biggest lifts.

Although Ronnie’s numbers are based on his best lifts across several years, we can imagine the impact he could have had in the powerlifting world had he focused solely on powerlifting.

In his prime, Coleman was probably the strongest rower of all time.

These rowing figures come from his training DVD shot in 2000 (Ronnie Coleman: The Unbelievable). For the uninitiated, 570 lbs can only be achieved by stacking one end of a barbell with as many 45s as possible (12).

Reportedly, in 2004, Ronnie found a way to cram on a little more weight on the T-bar. He managed to slap on 580 lbs on the bar and rowed for five reps before the V-handle broke. The guy broke a metal handle! A freaking metal handle! If this isn’t superhuman strength, what is?

We would say that Ronnie would probably have gotten at least eight reps if it was not for the weak metal.

Must Read: Ronnie Coleman Says He Could Break Today’s Squat Record In His Prime

In the training video from 2003 (Ronnie Coleman: The Cost of Redemption), after crushing the squat, The King loads up the leg press to the brim. After the sleeves ran out of space, he put a few more plates on the sled.

The owner of the Metroflex gym, Brian Dobson, then pulls out a calculator to compute how much weight Ronnie had on the leg press machine – you know shit is getting serious when you need a calculator.

Must Watch: Ronnie Coleman Looks Back on His 2300lb Leg Press

Ronnie Coleman Strength on Other Exercises:

Next Read: Best Back Ever: Ronnie Coleman vs Dorian Yates

While you process all the numbers and Ronnie’s superhuman strength, I’m going to go sit in a corner and meditate (and maybe cry a little).

So, what do you do with these numbers? While you should use them as motivation to improve your lifts and get stronger, make sure you are not spreading yourself too thin as it can put you at the risk of an injury.

Remember: Ronnie did not get to his peak strength within a week of starting training. He used progressive overload to achieve his level of strength, and so should you.