For 24-years, the Ronnie Coleman Classic was an amateur show where athletes could earn a pro card, but the legend has announced his event will likely be an IFBB Pro show this year. 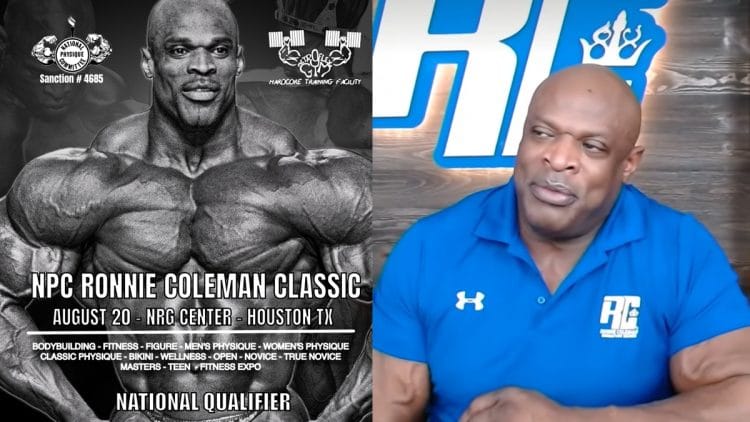 Regarded as one of the best bodybuilders to ever compete, Ronnie Coleman is a living legend and continues to build his legacy with his annual bodybuilding show. “The King” revealed that the Ronnie Coleman Classic is expected to take place in August and is considering hosting a Pro show as opposed to the usual amateur event.

Ronnie Coleman has amassed eight titles consecutively (1998-2005) at Mr. Olympia during his heyday. Following a successful career in the sport, Coleman still brings the same ferocity from his competition days to his workout videos. “The King” is tied with fellow legend Lee Haney for the most Mr. Olympia victories ever recorded.

Revered as one of the most dominant champions in the sport, Ronnie had the pleasure of receiving the highly prestigious lifetime achievement award at the Arnold Classic last year. Even as he gets older, he remains a pivotal part of the sport, especially since Ronnie now hosts his own bodybuilding show. While his efforts have mostly seen amateur athletes take the stage, it looks like that is all about to change this year.

At the Ronnie Coleman Classic, amateur athletes have the opportunity to earn pro cards. However, it looks like this year Ronnie is floating the idea of only athletes with pro cards being able to participate. In addition to revealing the month of the show for August (Ronnie Coleman Classic usually takes place in June), the bodybuilding icon touched on some of the logistics necessary to pull off an event of this magnitude in 2022.

Coleman spoke about the potential of a pro show in a video posted to his YouTube channel.

“I’ve been having my Ronnie Coleman Classic now for 24-years. Yeah 24 years. It’s always just been an amateur show but now I’m trying to do my first pro show next year. So that’s going to be kind of different also. So you know, you got to come up with prize money, you got to come up with these big sanction fees. 10, 15, no, $20,000 in sanction fees and all this kind of stuff you know. 40,000 in prize money and all that kind of stuff. Here we go again.” Coleman explains.

After speaking on sanction fees and potential prize money, Coleman revealed that his Pro show will likely host three divisions for bodybuilders to compete in which includes Open Men’s, Wellness, and Classic. Coleman also stressed that he chose August as the potential date to avoid any conflicts with the Toronto Pro show that plans to kick off in June this year.

“I want to do like, Open Men’s, Wellness, and maybe Classic. Ronnie said. I want to do the three just starting out and if they go good then I’ll start adding stuff every year. It’s going to be in August, now I normally have it in June, I always have my show in June because I’m trying to do the pros show, the date that I had that it was set on, they were having the Toronto Pro show that the same day.

So, I couldn’t do it, plus I’m regular friends with Ron over there, also I do this show every year. I’ve done this show every year for the last ten years. I didn’t want to have my Pro show on the same day his is on. That really wouldn’t be fair to him, especially to someone who has been a great friend to me all those years.”

Ronnie Coleman seemed confident that if his first Pro show goes off without a hitch, then he is open to adding more divisions as the show’s popularity increases. With a return date of Aug. in mind, pros can start making the modifications to their prep so that they bring their best package to what might be Coleman’s first IFBB Pro show.

Escalating Density Training – A Different Way to Work Out