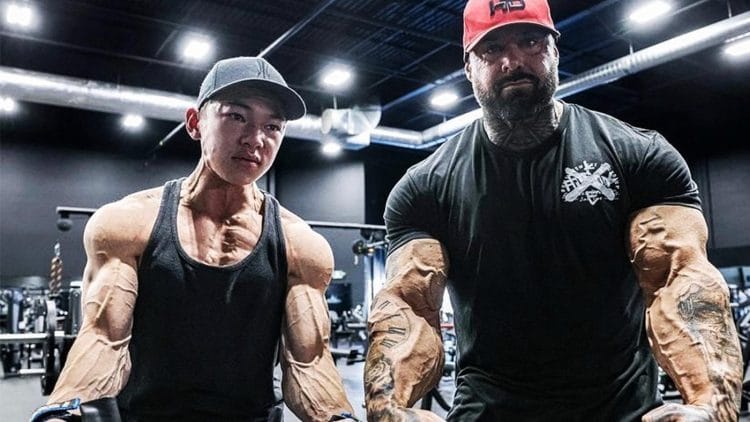 Tristyn Lee recently collaborated with Canadian IFBB Pro bodybuilder Frank McGrath for an arm day workout. Lee has gained a lot of fame and admiration for his incredibly proportionate muscular physique at a very young age. The 18-year-old has collaborated with the late Shawn Rhoden and YouTuber Bradley Martin in the past and it appeared that the arm workout with Frank McGrath was a ‘dream come true’ for Lee.

One of the most promising bodybuilders in the 2000s, Frank McGrath is best known for his association with the Animal fitness brand. The 43-year-old was admired especially for an incredibly vascular look but unfortunately, he never reached his full potential due to nagging injuries, accidents, and personal issues. Nevertheless, Frank McGrath inspired the youth to take up bodybuilding and fitness with his hardcore look as well as workouts. Having retired from competitive bodybuilding, McGrath seems to be enjoying the process of bodybuilding to stay healthy.

During the peak of his bodybuilding career, Frank McGrath’s massive forearms were the talk of the town and Tristyn Lee chose to work arms with him for the very reason. Lee and McGrath jumped into the arm workout and shared some good insights through their conversation. The entire workout consisted of supersets of biceps and triceps exercises. Supersets are an efficient way of doubling the amount of work by keeping the recovery periods the same as they would be when a person does individual exercises.

Being the more experienced of the two, Frank McGrath led the workout. He started the arm day with the superset of triceps pushdowns and preacher curls. Tristyn Lee revealed that his arms are the weakest as far as strength goes and stated that biceps exercises are especially difficult for him due to his short arms.

Biceps cable curls and skull crushers with an EZ bar

The purpose of the first superset was to get the blood flowing into the arms. The duo proceeded to do bicep cable curls and skull crushers with an EZ bar. The number of reps per set differentiates Tristyn Lee and Frank McGrath’s training preferences. Lee stated that he prefers fewer reps per set while McGrath revealed that reaching a specific number has always been important for him while training.

“Even when I would train legs for competitions, doing 20 reps… sometimes I did 100 reps on leg extensions or like we do leg press, we do 10 sets of 20,” Frank McGrath said.

Frank McGrath calls himself ‘preacher-crazy’ as preacher curls are his go-to exercise for biceps. He further stated that he uses dumbbells and barbell only when he is not doing a super-set. McGrath then led Lee to the third superset of the arm day. In addition to preacher curls, the superset consisted of a triceps workout that McGrath learned from watching Dexter Jackson. For this, the user rests his chest on the elbow pad of a preacher curls machine. Following this, the user then replicates the movements of overhead extensions using the handles.

After working the upper arms with three supersets, Frank McGrath and Tristyn Lee worked the forearms. The arm day workout concluded with a superset of wrist curls and wrist rolls.