The former Mr. Olympia believes judges nowadays are favoring size instead of looking at the complete 'overall package.' 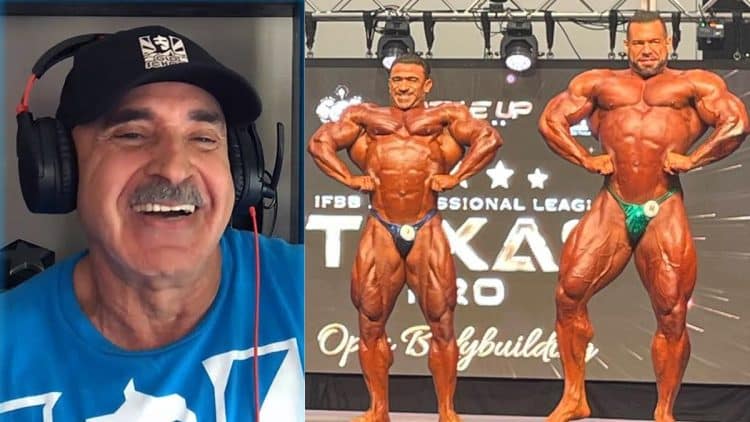 Bodybuilding veteran Samir Bannout reached the top of the sport in the 1980s, which he accomplished with incredible conditioning despite lacking size. In a recent video, Bannout called for new judging criteria as he believes officials nowadays favor taller and bigger athletes over shorter ones.

“How are you going to pick the greatest bodybuilder that year if you don’t allow the shorter guys next to them?” Bannout asked.

Ever since six-time Olympia winner Dorian Yates‘ reign in the 1990s, mass-monsters have staked their claim in the IFBB Pro League Men’s Open division. Even in today’s bodybuilding landscape, the timeless debate between size and aesthetics rages on.

As of late, this subject was brought into the limelight by top Open class competitors Iain Valliere and Blessing Awodibu. The Nigerian-Ireland native says ‘soon’ judges will favor aesthetics instead of size. Already, this year’s bodybuilding season has seen Andrew Jacked weaponize his shape and appealing structure at a pair of Pro shows, when he claimed victory at the 2022 Texas Pro and the Arnold UK.

Though, if you ask Valliere his opinion on the matter, he suggests that bodybuilders who favor a more appealing figure should opt to compete in Classic Physique instead of the Open. The latest to approach the controversial subject is Samir Bannout — who claims judges have ‘brainwashed’ bodybuilders with too many divisions and added that officials automatically favor size over conditioning and/or aesthetics in today’s sport.

Samir Bannout Calls for Changes to Judging Criteria: ‘They Favor The Big Guys, I Don’t Get It’

In the latest episode of The Muscle Maturity Podcast, Bannout and John Hansen discussed how judging criteria changed since Samir’s time competing in the sport.

“I wouldn’t right away say, ‘okay, Big Ramy or Andrew Jacked are favorites just because they are taller and heavier.’ Let’s wait to see them on the stage together, come on.

According to Bannout, he believes judges are ignoring some competitors because they aren’t heavy enough, which he says needs to change.

“Nowadays you cannot ignore guys with the height of let’s say, let’s speak about Martin [Fitzwater]. You cannot ignore these guys you know weighing 230 just because bigger guy weighs 300 or 280. You cannot ignore it. You gotta still look at the overall package. This is what the judges need to pay attention [to]. Automatically, they’re going to favor the big guys and that’s wrong.”

“I’ll just give you an example, how did Lee Labrada place — he was a runner-up in several Mr. Olympia, he almost won in Germany — maybe he should have. And Lee Labrada was what? 185 pounds versus Haney, who was like 250. So, why [are there] these drastic changes in the last two decades? I don’t get it.”

“You got to put the judges — talk to the judges, say look: this guy is 5″7′, he weighs 230, but beautiful balance put together right. The bigger guy is 290 but his hamstring or his calves doesn’t flow… they have to not right away go, ‘okay, let’s go for the big boy.’ I think that’s wrong. I really do. I have to say [though], Andrew Jacked is beautiful.”

Back when he competed, Classic Physique and 212 Bodybuilding were nonexistent. This led Samir to question why judges allowed shorter bodybuilders to win in the 80s and 90s, but not in today’s climate.

“If it happened back in the 80s and the 90s, why shouldn’t it be happening right now?” asks Samir Bannout.

Bannout believes judges are “brainwashing athletes” with how they score bodybuilding contests. He used seven-time 212 Olympia winner Flex Lewis as an example of someone who might have made the jump to the Men’s Open division had judges not favored size so often at past shows.

“Right now, the first call out is the big guys. That’s why I was talking about Flex Lewis. When Flex Lewis should have been easily acceptable or maybe runner-up, could have easily been in the winner’s circle, might have won the Mr. Olympia had he gone in. It’s like brainwashing the athletes, you know, ‘I’m only 212, there’s no way I’m going to beat the 280-pound guys.’ That’s wrong. They are brainwashing the athletes too.”

When it comes to crowning a Mr. Olympia winner, Samir believes the greatest bodybuilders should compete against each other, regardless of division.

Having competed in an era with few options, Bannout admits he’s annoyed with the number of bodybuilding divisions today.

“I don’t get it. All these bullshit classes. It does irritate me. What are you going to do with a guy whose 5″7′, how is he going to be 300 pounds. Why isn’t he allowed to be among the best on the planet and one show take it all, Mr. Olympia. Why not? Come on. We got to make some adjustments to the rule. It’s just not right,” Bannout said.

This isn’t the first time that Samir Bannout has called for changes in bodybuilding. A few years ago, he suggested that the sport needed to return to ‘old school bodybuilding.’ Bannout argued that the current era of athletes ‘prioritizes drugs over everything.’

RELATED: Samir Bannout on 1980 Olympia Controversy: ‘Something Was Going On; I didn’t Think Arnold Schwarzenegger Deserved to Win’

Bannout is adamant that there have been drastic changes to judging criteria over the past two decades. Given his experience competing in the Golden Era, Bannout believes the sport would benefit from recognizing shorter/smaller athletes at bodybuilding contests more often.