"The Mutant" and Hunter Labrada shared some impressive updates with only 11 weeks until Mr. Olympia. 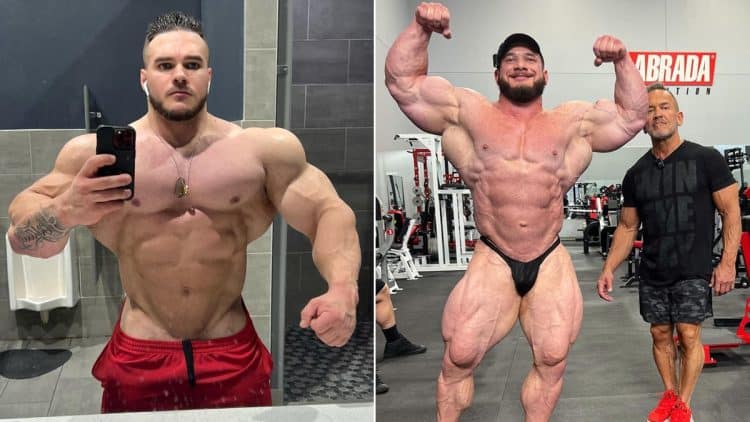 The Men’s Open division is one of the most competitive in the IFBB Pro League. In 2021, Mr. Olympia once again crowned Mamdouh ‘Big Ramy’ Elssbiay’ as champion for the second year straight. However, the contest also saw Nick Walker and Hunter Labrada emerge as legitimate contenders.

Labrada turned in a fourth-place showing at 2021 Olympia, which was his second attempt at the marquee event. He intends to show off improvements at this year’s Olympia contest with added size, conditioning, and a more detailed posing routine. Hunter will be tasked with facing some serious talent, such as rising star Nick Walker.

After such a successful 2021 season that included a pair of victories at the New York Pro and the Arnold Classic, Walker believes he has the tools to claim victory at Olympia later this year.

Last week, Walker rejoined his former coach Matt Jansen after the two separated on good terms in February. Many interpreted this reunion as a promising sign for “The Mutant.” With the show less than three months away, Labrada and Walker showed off some of their latest gains.

In the first update, Hunter Labrada turned heads with his impressive size after standing next to his dad, bodybuilding Hall of Famer Lee Labrada.

“Post training today with @leelabradaofficial 💪🏻
–
Got after it today with the old man! Filmed an arms session for my YouTube, and then had him put me through my mandatories/gave him a look for the first time this prep. Video to come soon!” Hunter Labrada wrote.

Labrada has maintained an incredibly busy schedule this year. In addition to guest posing at a number of contests, Labrada has been training non-stop. Earlier this week, the top Men’s Open contender shared a sleeve-busting arm workout. During the training session, it was evident that Hunter made meaningful improvements to his biceps and overall chest thickness.

Given the progress he’s made this year, former Mr. Olympia Samir Bannout suggested that Labrada is a definite wild card at 2022 Mr. Olympia. He advised him to ‘not show any weaknesses’ on stage and added that Labrada can separate himself from the rest of the lineup with effective posing.

“Now we are moving and grooving” Walker wrote.

This isn’t the first time Walker and Hunter have shared physique updates in close proximity to each other. In June, they both gave fans a sneak peek into the off-season progress they made.

Walker doesn’t mind training with some of his competition. In fact, Labrada and Walker met up for a brief training session a few months ago. They both agreed they want to face each other at ‘100 percent.’ In addition to training with Hunter, Nick pumped iron with reigning 212 Olympia champion Derek Lunsford, who received a special invitation recently to compete in the Men’s Open division.

Nick and former 212 Olympia winner Kamal Elgargni teamed up a number of times to train together as well. Elgargni decided to try competing in the Men’s Open division earlier this year, but his size held him back from victory. He finished runner-up to Akim Williams at the 2022 Tampa Pro, before placing fourth at the Texas Pro.

Walker and Labrada share a similar goal in wanting to dominate at 2022 Olympia. Judging by their physiques 11 weeks out from the contest, Walker and Labrada are on track for an epic showdown in Las Vegas, Nevada this December.