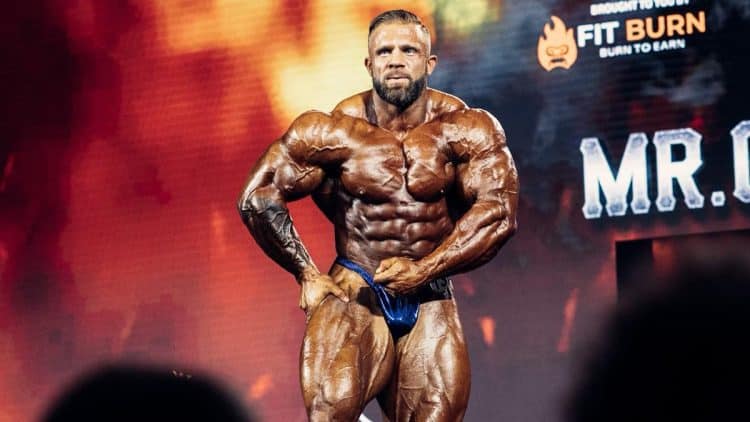 Canadian bodybuilder Iain Valliere had been a mainstay in the top ten of the Men’s Open division until the 2022 Mr. Olympia, held Dec. 16-17 at Planet Hollywood Resort & Casino in Las Vegas, Nevada. In a recent interview with Fouad Abiad, Valliere opened up about his lackluster performance and detailed why he dropped out of the top ten.

The most prestigious fitness showcase in the world wrapped up last weekend in the Entertainment Capital of the World. It marked one of the most exciting and competitive seasons of any in Olympia history with grizzled veterans and rising sensations battling it out for the top prize.

Men’s Open standout Iain Valliere turned in a stunning 2021 season, kicking things off with a dominant win at the Tampa Pro. He followed up with another commanding performance at the Texas Pro to earn back-to-back victories. His next showing came at the Arnold Sports Festival, where he fell short of the champion Nick Walker and placed runner-up.

Iain Valliere took home seventh place for the second time in a row at the 2021 Olympia. He had established himself as a top contender in the division which hosts some of the freakiest mass monsters in the world. He secured a win at the Vancouver Pro earlier this year and got to work for the Olympia. He took notice of budding prospect Andrew Jacked and expected an intense contest.

Former 212 champion Derek Lunsford chose not to defend the title and accepted a special invite from the IFBB League to compete in the Open division. Valliere did not shy away from bashing Lunsford for getting the invite and insisted he should have had to earn the qualification by doing a show.

During the build-up to the contest, Valliere made the decision to end his ‘coach-client’ relationship with longtime friend and four-time Classic Physique champion Chris Bumstead. They appeared to have an amicable split as Valliere wanted to focus on his own bodybuilding career.

Iain Valliere admits he made mistakes at the 2022 Mr. Olympia

In a recent interview/bro chat with Fouad Abiad, Iain Valliere talked about his lackluster showing at the 2022 Mr. Olympia.

“There was a mixture of frustration and disappointment. Mostly, I was overwhelmed with embarrassment at first but that faded really quickly. Then, I really just wanted another chomp at the bit. We made some mistakes, I made some mistakes. Then that opportunity passes by so quick. It’s come and gone like that. You prep for six months and you f**k something up and then it’s over with. And then you’re like, ‘f**k I gotta wait a whole other year to get my, to show them that that wasn’t me.’ That’s what I felt like the day after in my moment of gloom and doom.

“After that I moved by it real quick and I was really just hungry to get back at it. I don’t want to talk about it. I just want to be about it. I’m going to show it. I need to show less I think and not set the expectation on me so high and put that pressure on myself. Just need to revamp things.”

Valliere explained that he could not properly tweak his sodium and water intake to peak for the show. He also admitted to making mistakes in posing and preparations.

“What happened was we had reduced my sodium by a third on Thursday which really we don’t typically do. Sodium, and water for me need to be consistent variables and they can’t dip down too much, especially for extended periods of time. We got away with it for one day, with the reduced sodium, and then Friday morning I actually woke up looking f**king awesome. I think because usually I wake up pretty flat and build throughout the day, I woke up actually pretty full. So I think that scared us a little bit and it was like, sh*t, we have to not spill by nine PM.

“So we kept the sodium backed off, brought the water down, and meals were on the moderate side… There were active diuretics there plus reduction of sodium and water plus the meals weren’t as big. Maybe for the first meal or two, I started to look a little better with a little food before the sodium and water effects kind of started to show. Then as the day went, my look just deteriorated.

“Obviously I made some posing errors and stuff like that. There’s no responsibility there other than my own. We tried to change a lot of things in my posing in too short of a time… It was like paralysis by overanalysis.”

Just a week out from the 2022 Mr. Olympia, Iain Valliere showed off his insane muscle detail and paper-thin skin in an impressive physique update that hyped his fans. When all was said and done, Valliere fell out of the top ten and placed 11th. While getting a top-15 finish in the ultra-competitive lineup might satisfy some, Valliere is looking for redemption and will work on getting ready for his return at the next edition.

6 Major Headlines Coming Out of the 2022 Mr. Olympia Weekend