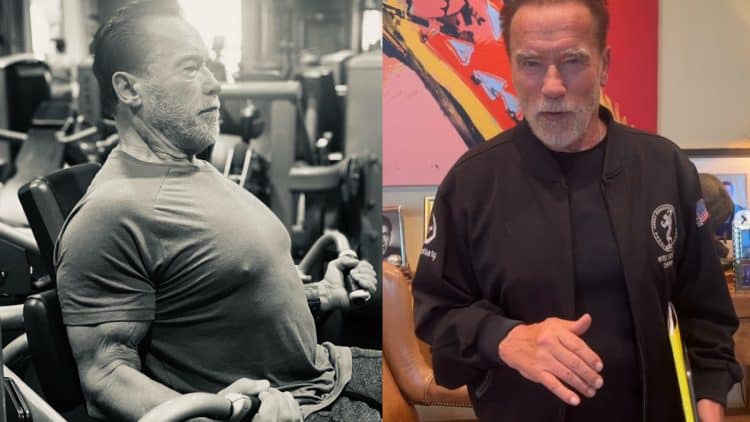 As one of the most famous bodybuilders walking the earth, Arnold Schwarzenegger made a living with his work ethic and dedication to fitness. Over the weekend, Schwarzenegger gave private training sessions for $150,000 as part of a children’s charity program.

Schwarzenegger recently returned to one of the meccas of bodybuilding, Gold’s Gym, in Venice, California. He revealed that he would be privately training a few people as part of a charity auction to help children with after-school programs.

During the event, Morris Flancbaum and his family made a generous bid in order to train alongside the 75-year-old Schwarzenegger. In fact, the Flancbaums put up a staggering $150,000 for the training session. On top of that, another unnamed auction winner joined in on the action as they also matched the $150K price tag.

All donations went to the After-School All-Stars charity program, which was created by Schwarzenegger in 1992. The charity provides adequate after-school programs, education materials, and exercise for 100,000 children spanning 60 cities.

In a video shared by TMZ, Schwarzenegger discussed the importance of after-school programs and how they can help shape children.

Check out his caption below:

“We raised over 5 million dollars last night for @afterschoolallstars. Thank you to all of our donors. I started this program with a vision of keeping kids safe and growing between 3-6pm, but we couldn’t serve 100k kids in 60 cities without you.” Arnold Schwarzenegger wrote.

“There is no such thing as a self-built man. Because, yes, I had the vision for the after school program. I wanted to follow through with it and make this vision a reality. We need people like that. We need people all over the world, all over the country, who are dedicated like that and really believe in children, and want to help those kids.

Kids are like a muscle. If you train and use it every day, it will grow. The kids grow really well if we attend to them, help them, push them, support them, and be there for them. That’s the bottom line,” says Arnold Schwarzenegger.

According to Schwarzenegger, 70% of kids in the U.S. come from households where both parents work. He believes these programs help kids, especially after school when their parents/guardians are away.

“I think there’s a huge vacuum in America right now, where kids aren’t getting enough attention. More than 70% of kids comes from households with both of the parents working — that means there is no one there after 3 o’clock when they get out.” That’s why we have to fill that vacuum that after school programs are all about.”

In addition to training sessions, Arnold also auctioned off clothes, humidors (controlled humidity boxes for cigars), art, and a ride on his infamous tank. Guests paid $50,000 to attend the event. A number of high-profile actors all showed up, including action-icon Sylvester Stallone, Danny DeVito, and Dolph Lundgren, as well as Arnold’s co-stars from his latest Netflix project, “FUBAR.”

This isn’t the first time Arnold’s philanthropic efforts have pushed his name into headlines. Back in 2020, the Terminator star donated $1 million to help support frontline workers and hospital staff. After the generous donation, he encouraged anyone and everyone to step up to support the heroes that protect the U.S.

One of Schwarzenegger’s latest acts of kindness saw him donate 25 small homes to U.S. military veterans. The bodybuilding legend donated a total of $250,000 to help those with pop-up tent houses upgrade for something more substantial.

As of late, it was revealed that Schwarzenegger lost a total of $4 million by hosting bodybuilding shows during the pandemic. This factored into the promotion’s decision to exclude Women’s Physique, Women’s Bodybuilding, Figure, and 212 Bodybuilding divisions from their 2023 festival.

RELATED: Arnold Schwarzenegger Reveals One Thing That Holds People Back From Success

While some might have scoffed at Schwarzenegger’s expensive training sessions, the high price was for a noble reason. Schwarzenegger continues to support children in America with the program he started over two decades ago.