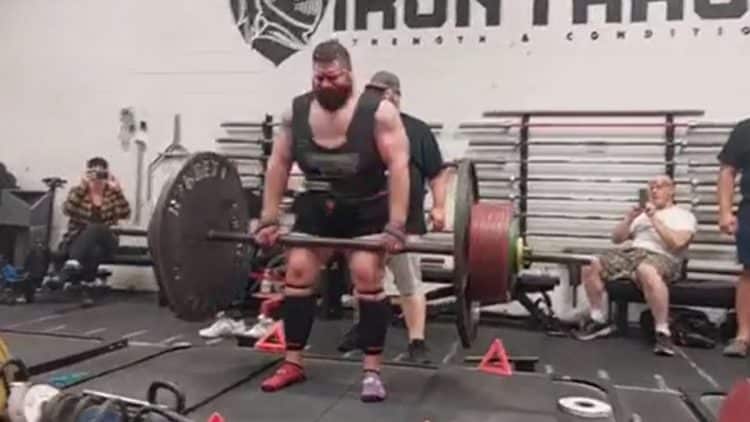 Strongman is one of the most thriving sports in Canada, mainly because of the large number of athletes who are capable of competing against the best and breaking world records. One of those is Sean Hayes, who is famous for his deadlifting abilities. Although Sean is great on the standard deadlift barbell, he excels at several Strongman variations also. Most notably, the Axle Bar Deadlift as he just set a new Canadian National Record of 1,045 pounds (474 kilograms) in this event. Sean made this record at a 2022 Static Monsters Worldwide competition, a highly regarded competition in the Strongmen community.

Sean Hayes shared a video of his newest achievement to Instagram on October 30, 2022, and gave some insight into how things played out. While Sean did set a new Canadian Record, he aimed to lift much more, that is why his 1,045-pound (474-kilogram) deadlift looked absurdly easy. Even Sean acknowledged that he could have pulled more weight.

Not only did Sean Hayes miss the Axle Bar Deadlift World Record attempt, but he also injured himself in the process.

“Goal on the day was Gabriel Peña’s World Record, loaded up 500.5 kilograms/1,103 pounds… the strength was there for it, but the body was not. My left SI [sacroiliac joint] popped out, badly… couldn’t walk for 30 minutes, and then only at 90deg bent over.

Bad-bad back injury, gonna see how I wake up, but it’s rough.”

Sean Hayes At A Glance

The last two years have been a peak of Sean Hayes’ Strongman career, although it is unclear when he began competing. He has so far appeared in five major competitions, with his best result coming at the 2021 Canada’s Strongest Man where he placed third.

Sean Hayes also shortly held the Silver Dollar Deadlift World Record in April of this year, having locked out 1,235 pounds (560.1 kilograms). However, that didn’t stand for long, as Rauno Heinla set the mark at 1,278 pounds (579.7 kilograms).

Sean Hayes did not share what his World Record attempt on the Axle Bar Deadlift looked like, but just revealed that he injured his back while doing it. As for Sean’s recovery, he did not provide any information, but hopefully, he won’t have to miss too much time in the gym.