Shane Hunt switches to a conventional stance and breezes through 11 reps of 700 pounds (317.5 kilograms). 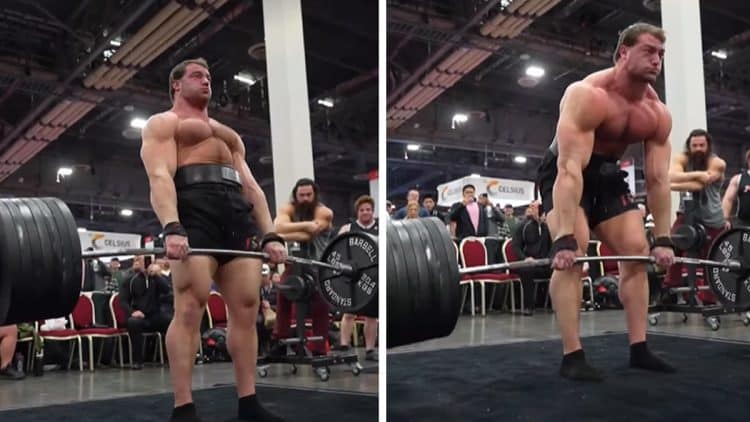 Shane Hunt has made a name for himself as one of the greatest deadlifters of today, having achieved massive pulls on a number of occasions. However, he is a man of many talents and interests, so he attended the world’s greatest bodybuilding convention, the 2022 Olympia Expo. Despite being surrounded by dozens of world’s greatest athletes, Hunt still wowed the crowd by deadlifting 700 pounds (317.5 kilograms) for 11 repetitions.

One of the things that sets Hunt apart from other powerlifters is his technique. He is known for using a sumo stance in powerlifting competitions, but his conventional stance abilities are obviously excellent as well. He proved that at the 2022 Olympia Expo, Hunt switched to a conventional stance for his deadlift and performed 11 explosive repetitions with 700 pounds (317.5 kilograms). In addition, he used lifting straps and a lifting belt, which allowed him to lift more weight with greater control and stability.

In addition to impressive bodybuilding displays at the 2022 Mr. Olympia competition, the Olympia Expo was also filled with exciting events. Strength Athletes like Shane Hunt put on an amazing show for everyone seeking entertainment. Some more notable performances came from the likes of Nick Best, who deadlifted 600 pounds (272.2 kilograms) for 15 reps at the age of 54-years-old. Brianny Terry also impressed everyone by locking out 10 reps of a 500-pound (226.8-kilogram) deadlift.

Shane Hunt is just a few months away from celebrating one decade since his first powerlifting competition. During these ten years, Shane has racked up 14 sanctioned appearances, of which he came out victorious 10 times. He has exclusively been competing in the raw division during his entire career, and is currently mostly taking part in the 125-kilogram weight class.

*Shane Hunt set all of his competition PRs at the 2022 USPA Pro Raw Championships with a fantastic performance.

Shane Hunt is determined to become the best deadlifter in the world, with a 1,000-pound (453.6-kilogram) pull being on his radar. Shan is proving that he is fully dedicated to making things work, as he is improving in all aspects of his technique. Hunt is already looking forward to the 2023 Olympia Expo, as he hopes to perform 10 deadlift reps with 800 pounds (362.9 kilograms).

Arnold Schwarzenegger: ‘Classic Physique Category Should Be The Mr. Olympia’