Shaun Clarida reveals the plan to compete in the Men’s Open division at the 2023 Arnold Classic. 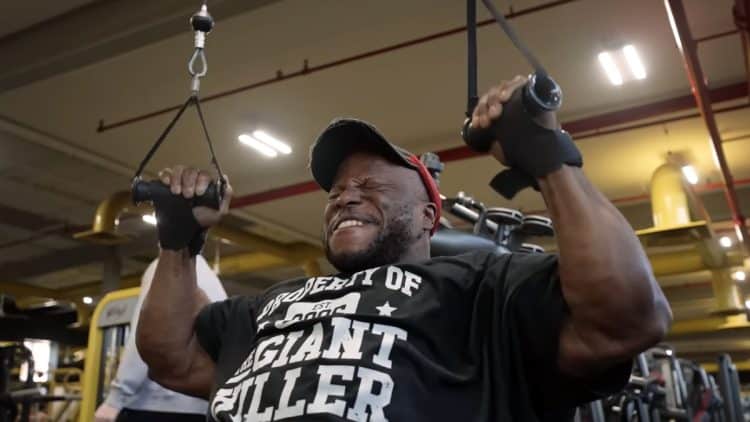 Shaun Clarida is back in the gym to achieve greater things after winning the 2022 212 Olympia title last month. Clarida is an American IFBB Pro bodybuilder and one of the most accomplished active competitors. Winning the 212 Olympia title in 2020 seemed to be the biggest achievement of Clarida’s career at the time. However, after losing the title to Derek Lunsford at the 2021 Olympia, Clarida chased even greater things and made a seemingly wrong move to the Men’s Open division. In spite of his short stature, the 40-year-old absolutely rocked in his divisional debut and won the 2021 Legion Sports Fest Pro. The win silenced the doubters, if there were any.

While he qualified to compete in both 212 and the Open division at the 2022 Olympia, Clarida chose the 212 division. He handily defeated elite competitors like Angel Calderon Frias and Kamal Elgargni en route to the second 212 Olympia win.

Clarida revealed that he did not stop working in the gym after the victory. He recently shared an intense back workout on his YouTube channel and revealed that he will be competing in the Men’s Open division at the 2023 Arnold Classic.

“Today is a new day, a new journey and a new goal. So if you guys haven’t heard the news though, maybe you didn’t hear the news yet… I am still working. The work has not stopped. As I would say, the job not finished. We have one more goal now. We’re seven weeks out from the 2023 Arnold Classic – Open division,” Shaun Clarida said.

Clarida’s back workout was a part of this prep. So without further delay, let’s take a closer look at the detailed account of this session.

Shaun Clarida goes through a back workout

A little over three weeks ago, Shaun Clarida competed in the 212 division. The 2023 Arnold Classic is merely seven weeks away and it might seem to be a very short period to make a meaningful difference in the physique for competing against the mass monsters of the Men’s Open division. However, Shaun Clarida has a strategy to be competitive. He said:

“There is a lot of change I can make to my physique in this short time. I can be harder, I can be fuller. I can definitely beat some people in some areas. So I did not take any time off after Olympia and went right back to work.” 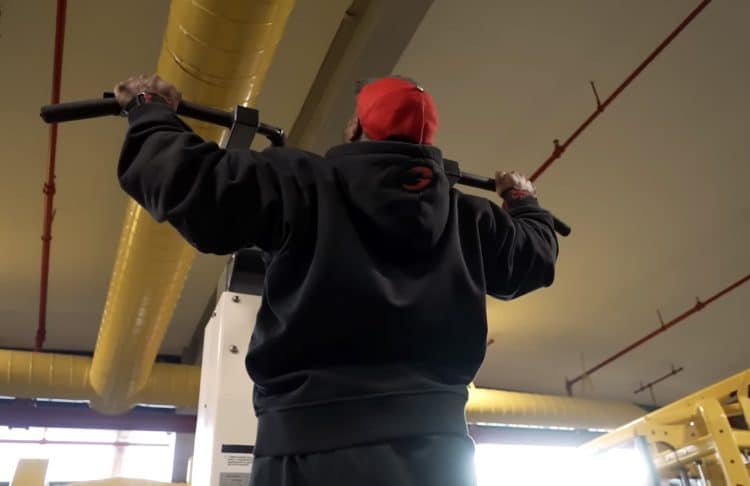 Clarida started the workout with assisted pull-ups. He feels that pull-ups are the king of exercises that you need to do for back development. However, he prefers doing this exercise on the assisted machine and almost never does them unassisted.

“I believe using the assisted pull-ups machine allows me to keep the focus on my lats. Zero momentum, zero jerking around and just focussing on what needs to be worked, again, back that is,” Shaun Clarida said.

Clarida got a few solid sets of this exercise with slow and controlled motion to increase the blood flow in the back and moved on to the next exercise.

While vertical pulls like pull-ups and lat pulls give you a wide back, horizontal pulls like rows impart thickness to the back. Therefore it is important to incorporate both types of exercise in the back training routine. Invented by the late John Meadows, the Meadows row rightly bears his name. It allows you to lift heavy weights unilaterally and strengthen the upper back, lower lats, and grip.

“We’ll throw some intensifiers here. No drop sets, clusters… Whatever it might be. It’s still a time where I am getting a good amount of food in, rebounding pretty well from the Olympia. So I’m gonna still continuously pound the f***ing weight because I can certainly make improvements going into the Arnold’s,” Clarida stated.

After pushing through some heavy and intense sets of the meadows rows, The Giant Killer took to the next back exercise. 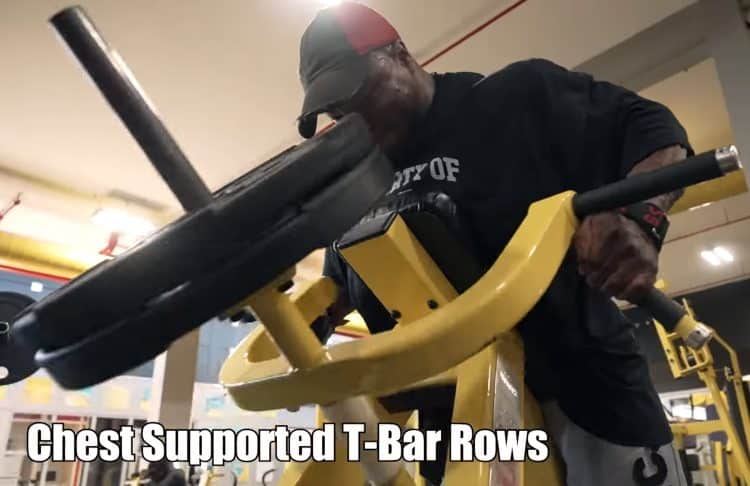 After working the lower lats with the intense exercise, Clarida decided to give it a little bit of a break. He took to the chest-supported T-bar rows to work the upper and the middle back. The chest-supported T-bar row uses gravity to negate jerking actions or momentum lifting. Since the chest is supported against the pad and the body is at an inclined angle, the user has to lift the weight using the back muscles and back muscles only. This helps isolate the back muscles to a greater extent.

“Usually over there (regular T-bar rows, we’re working up to four or five plates pretty easily. When you’ve got that chest supported row, there’s like very little to no momentum. So you’re just using your back and a little bit of your arms to pull it up,” Clarida said.

After cranking out a few quality sets with eight to ten reps, the 2-time 212 Olympia champion jumped into the next exercise. Clarida’s training partner explained that when you exhaust your muscles in an exercise and practice posing afterwards (holding the pose) it rushes the blood into the muscles and makes bodybuilders more ‘stage-ready’.

“Shaun’s one of the few people up there (on stage) who’s never catching his breath,” he added. 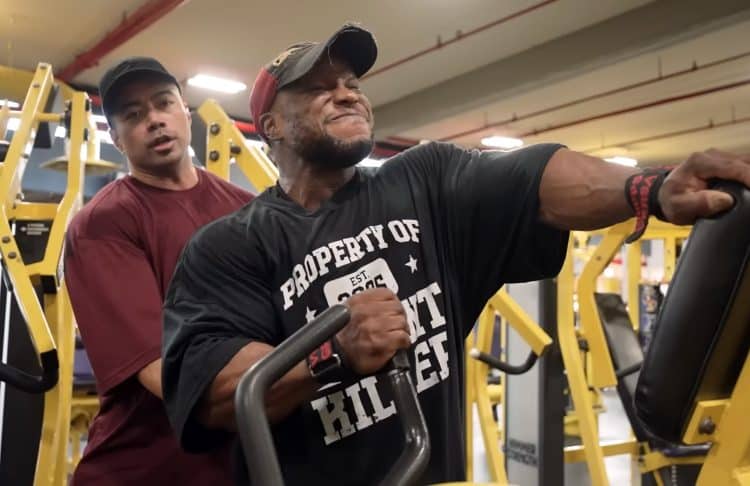 Clarida next took to the drag rows on a hammer strength machine. Although the machine is designed to do the chest-supported rows, Clarida braced his arm against the pad and did the drag rows unilaterally.

“The key to back development is elbow drive. If you want to get your elbows back as much as you can, that’s going to get much more of your back. So the key here is driving that elbow back into your back pocket and squeeze down,” Clarida said.

He got a few solid sets of this movement under the belt and took to the next exercise. 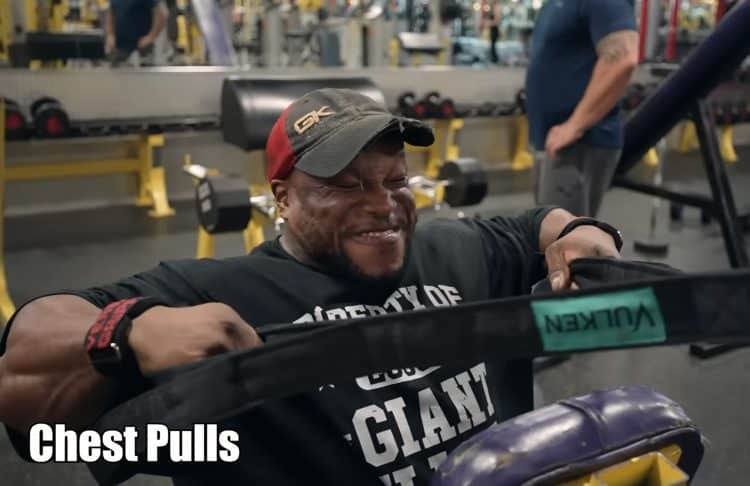 Clarida next performed the chest pulls with band attachment for adding more stimulus to the back muscles.

The 40-year-old did a few high-volume sets of chest pulls and transitioned to a vertical pull next. 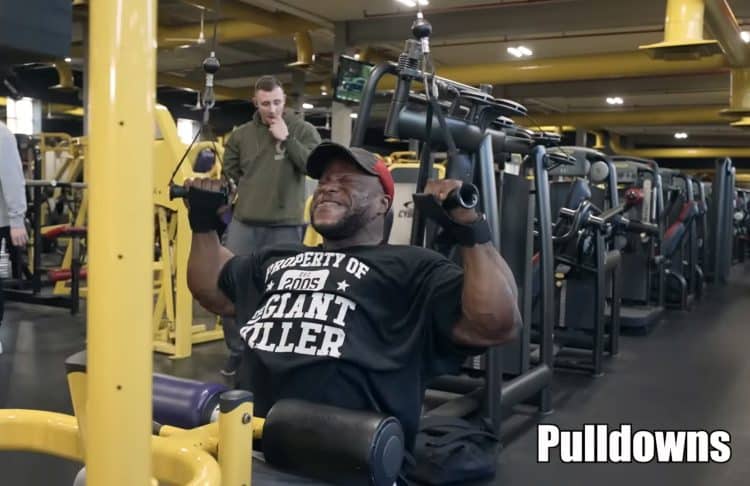 Clarida took to this pulldown movement after a lot of horizontal pulling exercises. He used D-handles connected to the cables for doing this exercise instead of a bar. While explaining the reason for this, Clarida said:

“The way these are set up, it directly hits my lats perfectly. So… I’m able to move my hands freely to really hit or target my back… . I don’t like to use the pieces that are fixed because not everyone’s wrist positioning is the same. When you have that D handle you have that possibility to be able to manoeuvre your wrist to hit the area properly that works best for you. So that’s what we’re doing here!”

Shaun Clarida cranked out a few solid sets of lat pulldowns and moved on to the finisher of the day. 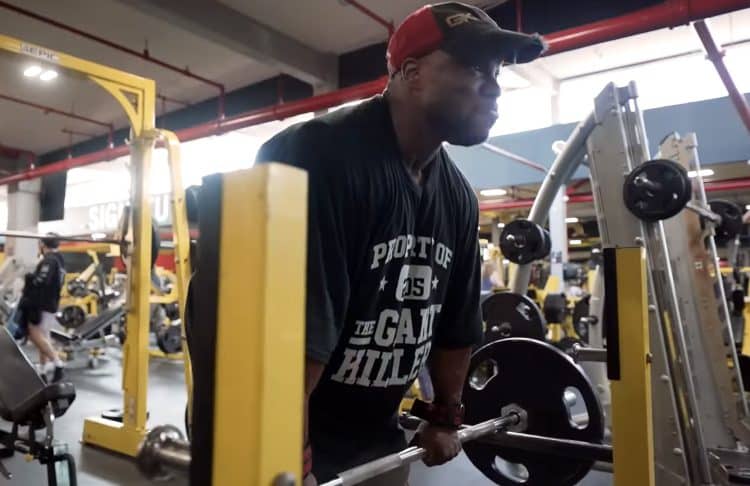 Rack pulls are a variation of deadlifts where the bar is lifted off an elevated rack instead of the ground. While there are various opinions on the correct height of the rack from which the bar is lifted, Clarida explained that he likes to keep it slightly above knee level.

“The reason I do that is because I have two herniations in my back. So anything lower than my knee cap, I feel that pain there. I want to obviously stay away from that. So if I’m able to put that bar above my knee, I don’t feel that pain,” Clarida revealed.

Clarida pushed through some heavy sets of rack pulls to build the back and wrapped up the training session.

After the workout, Shaun Clarida explained that the back is a very big body part and working different parts of the back from all angles, different positions requires a large number of different exercises. Hence he did a total of 30 to 35 sets of all the seven exercises. Each exercise included a warm-up set, a couple of feeder sets, and one to two heavy sets.

Clarida believes that the key to winning a Men’s Open competition is to bring a complete physique with the least number of flaws. He reminded that he could beat the much bigger guys at the 2021 Legion Sports Fest Pro not because of his size but because of the symmetry, proportions, definition, and conditioning.

“I just presented my physique in a way that was just dominant that day. That’s what got me to win and that’s what I’m taking, that mindset, going into the Arnold’s. I’m not playing anyone’s game but my own. I’m not going to size up, try to fill out to get bigger just to go against these guys. I know my strength, conditioning and presentation to the Arnold’s,” Clarida stated.

The year 2022 wrapped up on a high note for Shaun Clarida as he welcomed a baby boy soon after winning the 212 Olympia title. He enters 2023 with newfound purpose and momentum. It will be interesting how he uses them to extend his competitive legacy further.