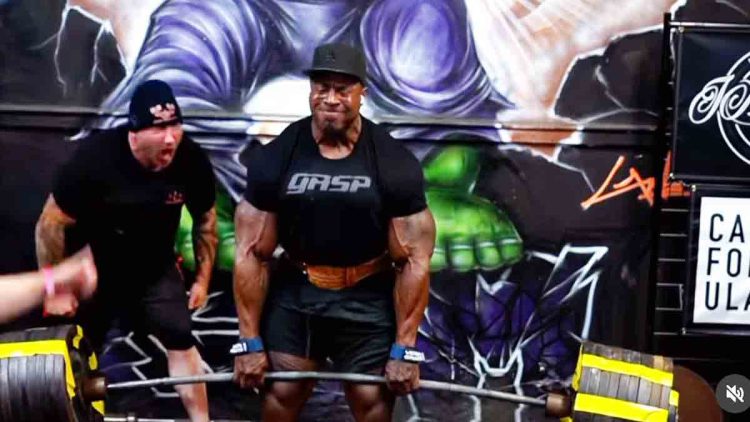 IFBB Pro Joe Mackey has made waves in the world of bodybuilding in recent years, in large part because of his freakish strength. Just last year, Joe deadlifted 900 pounds (408.2 kilograms), a feat of strength unprecedented in bodybuilding before him, and dedicated it to a fellow bodybuilding legend, Cedric McMillan, who passed away shortly before. In 2023, Joe aimed to push his limits even further and succeeded at C.T. Fletcher’s Iron Wars VII, on January 13th. Mackey brought the hype to the event and deadlifted 910 pounds (412.7 kilograms). This lift is not only a new personal record (PR) for Mackey, but it is also the unofficial heaviest deadlift ever completed by an IFBB Pro bodybuilder.

The PR itself was not without its struggles. As the weight exceeded 900 pounds, Joe Mackey had a difficult time locking out the lift. He had to dig deep and summon all of his strength and willpower to finally complete the lift. As Mackey let go of the bar and dropped it to the ground, he was rewarded with cheers and applause from the crowd.

Joe Mackey used a lifting belt and what seem to be wrist wraps to help him complete the lift, both of which are common tools used by powerlifters and bodybuilders to increase stability and support during heavy lifts. His stance was also conventional, with his feet placed shoulder-width apart and his back straight.

“I was able to get the lock out, but I wanted to hold it with my signature smile at the top! Unfortunately 910 lbs kept wanting to pull me down, but!…. We’ll count it!!!”

Joe Mackey has already attempted the 910-pound (412.7-kilogram) deadlift a few weeks ago in training, but couldn’t lock it out. So, after a couple training sessions and under the influence of an electrifying atmosphere, Joe finally managed to complete it.

Joe Mackey won his IFBB Pro card by placing second in the super-heavyweight division at the 2016 NPC Nationals, which meant that he accomplished one of his life goals. In addition, as Joe grew stronger, he was compared to the likes of Ronnie Coleman, Stan Efferding, Johnnie Jackson, and Franco Columbu, who are notable for their strength amongst other abilities. So, Mackey got inspired to become even better, making him one of the greatest deadlifters the IFBB has ever seen.

Apart from getting stronger over the last few years, Joe Mackey has also significantly improved his physique. Due to his massive arms and all-around shredded physique, Joe became a fierce competitor in the IFBB Pro league. In fact, Mackey earned a fourth-place finish at the 2022 IFBB Tampa Pro just a couple of months ago. He also got a ninth-place finish at the Texas Pro just one week later.

Most recently, Joe Mackey gave some insight into how he synthesizes muscle growth in the off-season, having shared what groceries he incorporates in his diet.

As things currently stand, it seems that Joe Mackey has no intention of resting from the deadlifts, but could instead push towards new PRs. His strength training and bodybuilding program go hand-in-hand, and have worked wonders for him over the last year. Joe Mackey has even bigger goals on his radar for the year ahead.