The Giant Killer and The Butcher destroy shoulders and chest in a joint training session. 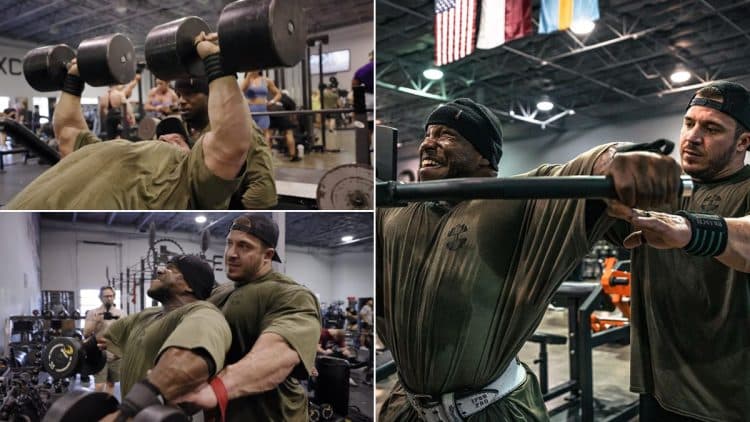 Bodybuilder Shaun Clarida is an IFBB Pro bodybuilder competing in the 212 and Open divisions. Winning the Olympia 212 title in 2020 marked the highest point of Clarida’s career. However, following a runner-up finish at the 2021 Olympia, the 39-year-old tried his hand at the Open division and won his divisional debut at the 2021 Legions Sports Fest Pro.

Brett Wilkin is an Open division competitor who last competed at the 2022 Arnold Classic, securing a sixth-place finish. The Butcher has since been on an extended break and is working on taking his physique to the next level.

The Giant Killer started his competition prep with an intense pull-day workout 20 weeks out from 2022 Olympia. The event will take place from Dec. 15 to 18 in Las Vegas, NV.

Wilkin and Clarida recently teamed up for a grueling push-day (chest and delts) workout. The video of this session was uploaded on Shaun Clarida’s YouTube channel.

The exact exercise sequence was not pre-decided for this training session. Instead, Clarida and Wilkin contributed in their own way and got the best of both worlds. The duo started the session with a few warm-up exercises before jumping into heavier sets.

The bodybuilding duo started with chest exercises and did incline dumbbell presses to target the upper chest. They performed the first set with 85-pound dumbbells and worked up to 150 pounds for the third set. The fourth set—the top set of the exercise—employed 160-pound dumbbells.

“That felt good, man. It’s been three months since I did dumbbells… Now we’re going to want some flyers to open up the chest… A little bit of pump there. So let’s get it all stretched out…” The Butcher said after finishing the sets.

The duo next performed this exercise for a deep pec stretch and to get the blood flowing. After finishing all the sets, Clarida said:

“So we did dumbbell presses with a pronated grip and some flyes to open things up. Now we’re going to one of my favorite Nautilus pieces…”

This movement targets the sternal head of the pectoralis major and also works the clavicular head. Additionally, vertical chest press activates the anterior head of the deltoids when a neutral grip is used.

“We’re gonna go to neutral grip to really drive through and really get a good squeeze here,” Clarida said.

Clarida and Wilkin performed a few sets of this exercise with incremental load before moving on to the next lift.

Incline chest press served as the finisher for the chest workout. Both men did the first set with a single plate to get a hang of the movement and used two plates for the second set. The third—and final—set employed three-and-a-half plates.

After finishing the chest workout, Wilkin and Clarida started the shoulder workout with the reverse pec deck fly. This movement targets the rear delts, which are difficult to activate compared to the anterior and lateral deltoids.

The bodybuilding aces started with full reps and finished each set with a few partial reps to get an extra burn.

The third exercise in the shoulder workout targeted the anterior and lateral delt heads along with the trapezius muscles in the upper back. Clarida and Wilkin performed a few sets with slow and controlled motion and moved on to the next exercise.

After a series of machine exercises, The Giant Killer and The Butcher took to this free weight movement to work with moderate weights and got a few sets in.

Shoulder press on a plate-loaded machine

This exercise served as the finisher for the shoulder workout. The elite bodybuilders started the lift with a single plate. They added one plate for each subsequent set and wrapped up the workout with a top set of three plates.

Shaun Clarida intends to create history at the 2022 Olympia by becoming the first athlete ever to compete in both the Open and 212 divisions. However, he is yet to get a confirmation from the Olympia organizers whether he will be allowed to do so. Irrespective of which division he competes in, it is clear that the Giant Killer will be a challenge for his opponents.

As for Wilkin, the 34-year-old will next compete at the 2022 IFBB Romania Muscle Fest Pro that will take place from Nov. 11 to 13 in Bucharest, Romania. Looking at how he is training, it will not be surprising to see Wilkin pulls off a win and earn a direct qualification for the Olympia later this year.