Hunter Labrada continues preparation for 2022 Mr. Olympia after having his biceps measured by his father Lee Labrada at 22-and-a-half-inches. 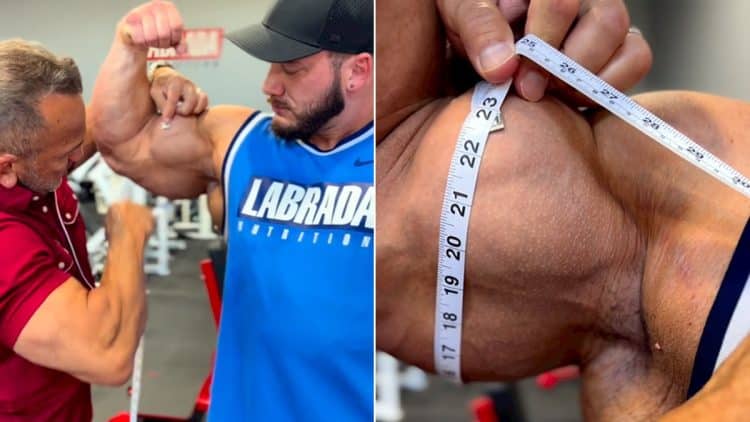 Hunter Labrada, son of bodybuilding Hall of Famer, Lee Labrada, inherited his father’s iron will and dedication to building championship-caliber physique. In a recent post made to Instagram, Hunter showed off his massive 22-and-a-half-inch biceps after smashing a demanding arm workout with his father.

Long before Hunter Labrada emerged as a preeminent threat in the Open class, his father, Lee Labrada established himself as one of the fiercest competitors the sport has seen. Boasting aesthetics and razor-sharp conditioning, Lee managed to place in the top four at Mr. Olympia for seven years consecutively. Today, Labrada is admired for his longevity and shredded physique, which he’s maintained at 62 years old.

In 2021, Hunter laid waste to his competition at the 2021 Chicago Pro. Widely recognized for his muscularity and slim waist, Hunter brought his best package possible to the Mr. Olympia contest last year. He was tasked with facing a deep lineup of talent, which resulted in a fourth place finish.

While he was unable to get past two-time winner Big Ramy, runner-up Brandon Curry and Hadi Choopan, Hunter appeared to have a more complete/prettier package than 2021 Arnold Classic champion Nick Walker, who finished the show in fifth.

After pushing each other on the Olympia stage, Hunter and Nick sparked a friendly rivalry. It seems when “The Mutant” posts a physique update, Hunter follows suit, and vice-versa. Earlier this year, the two Men’s Open Olympia contenders met up in person, and both agreed that they want to face each other at 100 percent later this year.

Hunter Labrada: You Can Never Have Too Big of Arms in Open Bodybuilding

“I’m no @nick_walker39, they’re only 22s (and a 1/2😅🤣), I keep ‘em clean though👌🏻
–
Great arm session today, pump was juicy enough that @leelabradaofficial was curious what they were measuring these days, and it had been long enough since I measured that I was too!
–
Been training arms every 4th or 5th day since the ⭕️, because let’s face it, you can never have to bug if arms in open bodybuilding🤷🏻‍♂️” Hunter Labrada wrote.

Related: Average Biceps Size: How Do You Measure Up?

Hunter revealed he’s training arms every fourth or fifth day of the week. In preparation for rising star Nick Walker and the rest of the 2022 Olympia lineup, Hunter has dedicated this year solely to making improvements to his physique. He recently shared a brutal push day workout where he stressed maintaining form during repetitions to maximize results.

Throughout this season, he’s kept his followers on the pulse as to which body parts he’s focusing on. One of his latest training sessions included a pro-tip where he revealed the best triceps exercise for him is cuffed triceps extensions.

Other veterans of the sport like Samir Bannout suggest Jacked could make the first call out and top four at 2022 Mr. Olympia on his first attempt. However, both Cutler and Bannout agree, Michal Krizo is another giant threat to any Men’s Open competitor, including Hunter Labrada.

Krizo hasn’t earned his pro card yet but is planning to at the 2022 Amateur Olympia Italy contest next month. Bannout boldly claimed Krizo could win Mr. Olympia on his first attempt should he earn a pro card and qualify.

With numerous bodybuilders eager to prove themselves at Olympia, Hunter Labrada is focused on placing higher than his fourth place showing last year. After training arms with his father, Hunter plans to keep building his biceps to combat the other contenders at 2022 Mr. Olympia.