Wheels opens up to Panda about his steroid use experience during a shoulder and arms workout. 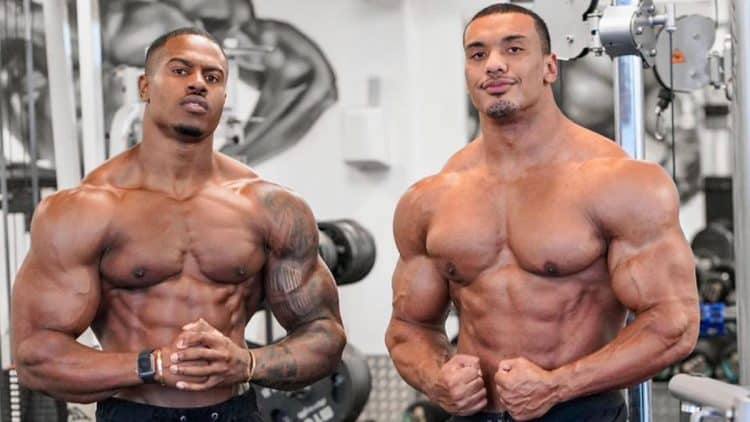 Larry Wheels recently collaborated with Simeon Panda for an intense training session. Wheels is a powerlifter, arm wrestler, and bodybuilder, that has also trained in strongman sports. He is a popular fitness influencer known for setting powerlifting records in the gym with incredibly heavy lifts. The 27-year-old is one of the few people in the fitness industry that have never denied using steroids. However, Wheels quit steroid use after a decade of abuse.

Wheels recently joined hands with British bodybuilder, fitness model, entrepreneur, and social media celebrity Panda. The 36-year-old is known for his impeccable physique and incredible strength. Wheels and Panda collaborated four years after they trained shoulders together in 2018. The training session went down at the Birmingham Ultimate Fitness gym early in the morning. The duo had some interesting conversations and shed light on arm wrestling and Wheels’ experience with steroids. The video of this session was uploaded on Wheels’ YouTube channel.

Wheels and Panda took to this exercise to start the workout. The Viking press machine moves in a slight arc as opposed to a straight line. Additionally, most Viking press machines have a neutral and parallel grip option, which makes the movement shoulder-friendly. The user can also dip down at the beginning of each rep and start the movement from the legs, making it an incredibly effective full-body movement.

Wheels and Panda next took to the cable lateral raise to work the medial delt heads and performed a few sets with controlled motion. They used a fat handle attachment to enable a more natural grip.

The duo next took to the barbell front raise and focused on working the anterior delt heads. While this movement can be performed with dumbbells and cable machines, the barbell can help overload the muscle to a greater degree. After completing a few good sets of this movement, they shifted their focus to the biceps in the next exercise.

The standard dumbbell curl was the only biceps-dedicated exercise in this workout. Wheels and Panda cranked out the sets with incrementally heavier dumbbells and moved on to do a triceps exercise.

This served as the finisher to Wheels and Panda’s shoulders and arms workout. Rope pushdowns are one of the most common triceps isolation exercises in gyms around the world and work all three triceps heads. The duo pumped blood into their triceps with this movement and finished the training session.

Larry Wheels Speak About His Journey in Arm Wrestling

Wheels started arm wrestling about two years ago and continues to participate and spread the word about this sport. When curious Simeon inquired about Wheels’ experience in the field, he said:

“I see myself more as an ambassador of the sport rather than an athlete,” Wheels said.

Wheels has faced much smaller but highly experienced arm wrestlers. Russian arm wrestling icon Aleksandr ‘Schoolboy’ Beziazykov (70KG) and Maxim Bitarov (70KG) defeated Larry while Indian National 70KG arm wrestling champion Stewe Thomas held his own against the 27-year-old when they arm wrestled. Wheels admitted that he is still a newcomer in the sport and said:

“I’m still learning. Two years in arm wrestling is like a baby in this sport. A lot of arm wrestlers even though some are younger than me have been in it for 10 years plus. So I just have a lot to learn.”

“In arm wrestling your pronation your rise your supination… You don’t do these when you are doing any other sport like bodybuilding, strongman, and powerlifting. Only when you are arm wrestling, do you train these small muscles.”

The Brit was curious to know more and asked Wheels to share an ideal path to get a head start. Wheels stated that there are arm wrestling clubs in many North American cities and the UK. He added that these clubs can be a good starting point for those willing to get into this sport.

“You’ll have arm wrestlers with all shapes and sizes, at all levels of experience that can guide you when you are first starting out and Google first thing how to not break your arm…”

The 27-year-old added that biceps or elbow pain become commonplace once you start arm wrestling regularly. However, most arm wrestlers learn ways to work with it.

“I get a deep tissue massage once a week when it gets out of control. Some people like to ice their elbows. You just learn to live with it. For the love of the sport, you do it anyway…”

Wheels is a record-wrecking machine known for setting personal records. He has several powerlifting records under his belt, a feat achieved with hard work and heavy use of steroids.

“At 17, I started comparing myself to other juniors – people from 18 to 23. When I was coming up back at 17, there were some super strong juniors… Guys that are 19 or 20 doing 800 pounds for example. I looked up to these guys and I would say, ” well, I am 17 doing 700. So with a little more effort, I could definitely be competitive.” I was right. I was 21 when I got my first World Record. And then I kept doing really well until I was like 24. Now, I’m a bit burned out. So I am happy to just cruise.”

After a decade of gear use, Wheels recently stopped using steroids and has switched to testosterone replacement therapy (TRT), significantly downsizing as a result. The use of steroids or other PEDs has its own benefits, and many people use them to enhance their performance beyond their natural abilities. However, Wheels admitted that the workouts and life, in general, feel a lot better when he’s not using them.

“Everything outside the gym was very challenging sleeping, eating naturally, having sex… driving, walking especially… I remember I was in a mall. We got from the parking lot walking for five minutes, and I needed rest. I never felt so out of shape in my life.”

“Comparing how it feels now, I’m 50 pounds lighter… It’s night and day. I would never do that again, never.”

Speaking about other clinical effects of using steroids, the 27-year-old added:

“Not to mention acne – It’s terrible! Breathing – it’s like you never get a full breath of air, never satisfied.”

“I have found training on steroids more difficult because I would get pumped so quickly after the first exercise, I have this skin-splitting pump…”

Wheels revealed that he could barely raise his arm or get a contraction after the first 20 minutes of a workout.

“So the rest of the workout it’s fighting this crazy pump. The pump was so overbearing that it made everything more challenging and I would be struggling to keep up with everyone I trained with.”

Over a month after stopping steroid use, Wheels stated that he has lost significant strength and does not get the same kind of pump. However, he feels a lot better, and his stamina is ‘going through the roof’.

“I am recovering in between sets much better. I’m not sweating profusely. I am not huffing and puffing like I used to. So it’s easier…”

You can watch the full video below, courtesy of Larry Wheels’ YouTube channel: