Terry Crews is arguably the best-built guy in Hollywood. Find out what it takes to maintain his shredded, athletic, and muscular physique. 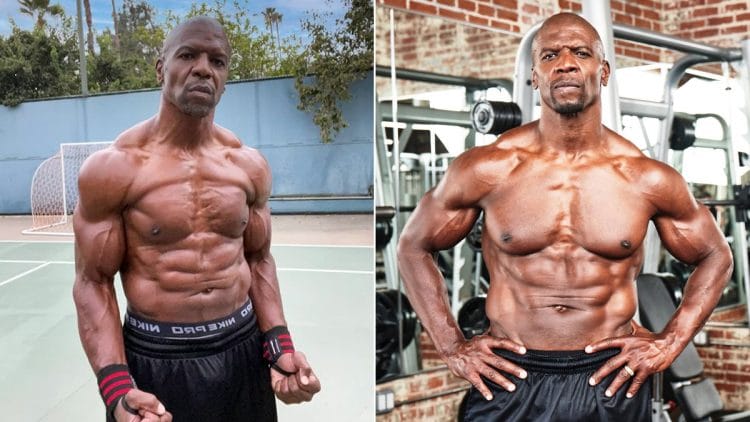 Terry Crews is extremely popular and has established himself as one of the best-built actors in Hollywood. He may not be as big as guys like The Rock, but he has achieved a fantastic muscular-athletic and ripped physique.

In this article, we take a deep dive into the training and diet that Terry has followed over the last 20 years to forge his physique.

Terry Alan Crews was born on July 30, 1968, in Flint, Michigan. As a youth, he was given a flute by an aunt. This led him to study music, and he entered Western Michigan University on an art scholarship. He tried out for the football team in his freshman year.

Crews was a natural football player, earning a full athletic scholarship. In 1991, he was drafted into the Los Angles Rams. Over a six-year career, he played for the Rams, Green Bay Packers, the San Diego Chargers, the Washington Redskins, and the Philadelphia Eagles.

Following his retirement from the NFL, Crews moved to Los Angeles to pursue an acting career. His first breakthrough came in 1999 with a role in the syndicated gameshow Battle Dome. However, he had to content himself with small commercial roles for the next couple of years.

Terry’s big break came when he was cast in the movie Friday After Next starring Ice-Cube. Interestingly, Terry had previously worked for Ice Cube as a security guard. Other movie roles soon followed, including in 2004’s White Chicks and 2005’s The Longest Yard.

Between 2005 and 2009, Terry played Julius Rock in the sitcom Everybody Hates Chris. This role established him in the public consciousness. In 2010, he secured another sitcom role in Are We There Yet? In 2013, when this series ended, he took on the iconic role of Sergeant Terry Jeffords in Brooklyn Nine-Nine.

For the 2014-15 seasons, Crews was the host of the American version of the game show Who Wants to Be a Millionaire? 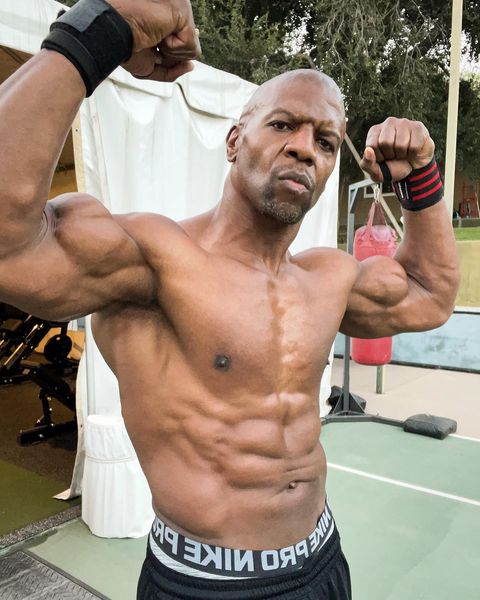 Terry’s eating window is between 2 pm and 10 pm each day. He has his workouts during his fasting period at 10 am. Prior to the workout, he will have a cup of black coffee, BCAAs, and a teaspoon of coconut oil. These do not throw him out of his fasted state but provide the energy surge he needs to carry him through his workout.

Terry has four rules that he uses to choose the foods that he eats during his daily eating window:

Tery’s first meal, at 2 pm, usually rotates between the following —

At around 7 pm, Terry will have his second meal of the day. It is similar to the earlier meal, but he also has a slice or two of bread with this meal.

Then, about thirty minutes before going to bed, he will have a casein protein shake with almond milk, almond butter, a banana, and coconut oil.

Here’s what Terry has to say about Intermittent Fasting —

“For me, the intermittent fasting thing has been a bit of a fountain of youth. Most days I’ll eat my first meal at 2 pm and my last meal at 10 pm. I like to work out in the morning—I’m a big ‘wake up, hit it, get it done kinda guy—then eat my biggest meal in the evening. I find that restricting the times when I eat means I eat less.

For the first four or five days, I was so hungry it was unbelievable, but all of a sudden, my body adapted, and the hunger pains went away. Now I don’t eat as much, and I get full a lot faster. I also save my carbs for my evening meal.

On Sundays, I have a cheat day, where I eat whatever I want—pizza, ice cream, anything I’ve been thinking about during the week. It’s changed my life. I’ve managed to maintain all my muscle and burn away all my fat. And because I’m eating more at night, my body produces more testosterone and growth hormone while I sleep—and gives me more fuel for my workout for the next morning.” 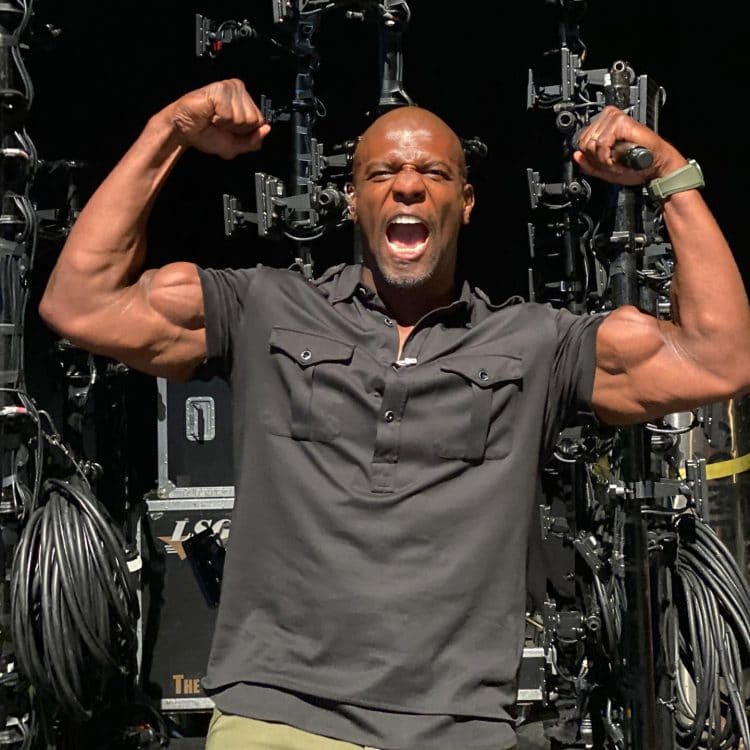 Terry prefers not to train like a bodybuilder. His approach to training follows a more athletic approach. As an actor, he doesn’t want to take on that huge, bulky look. Here’s what he does to maintain his ripped, lean physique —

Terry’s biggest training principle of them all is consistency. Here’s what he says on the subject:

Terry has been obsessed with building big arms ever since he was a kid. He had an uncle named Buddy who, according to Terry, had the biggest arms of anyone he had ever seen. He vowed that he would follow suit.

Rather than doing a whole lot of isolation exercises to build his biceps, Terry believes that you can get awesome biceps and triceps by doing compound exercises.

“To me, the arms are part of the whole body, and they get hit when you’re doing any kind of upper-body pulling and pushing movements, and then you can finish them off with specialized movements afterward,” said Terry in an interview.

Check Out: Terry Crews Shares The Video of Chest And Arms Workout Hours Before AGT Semi-final

Let’s now take a look at the type of week-long training program that Terry has been following, with minor modifications, over the last 20 years.

Tuesday: Back and Cardio 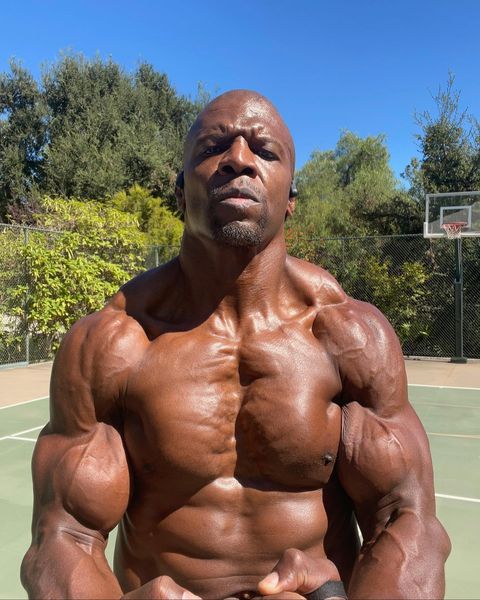 Terry regularly consumes pre-workouts and protein powders. However, it does not happen around his workouts as he trains at 10 in the morning, which is in the middle of his fasting period.

Terry takes a casein protein powder about thirty minutes before going to bed. Casein protein provides a slow release of amino acids through the night while his body is in its maximum muscle-building state.

Before his workout, Terry does not have a traditional pre-workout. Instead, he focuses on zero-calorie compounds in order to stay in his fasted state. He will have a cup of black coffee about 30 minutes before the workout begins, which contains about 100 milligrams of caffeine.

Terry adds a scoop of powdered branch chain amino acids to his pre-workout cup of coffee. The powder contains six grams of BCAAs per scoop in a 2:1:1 ratio of leucine, isoleucine, and valine. 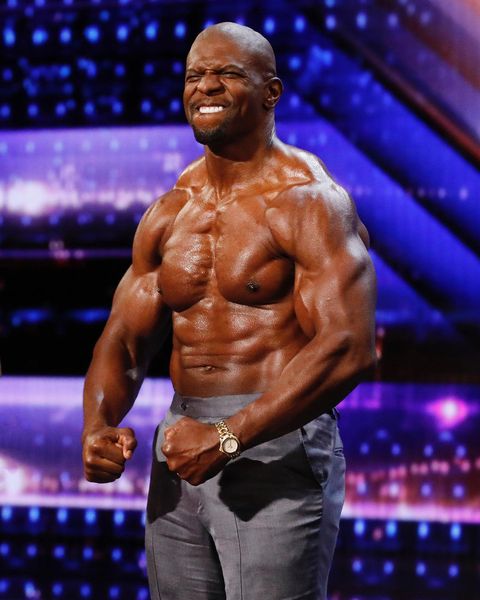 Terry Crews claims that he looks and feels better now than when he was 22. When you consider that Terry was an NFL pro football player in his 20s, it’s even more impressive that he’s in even better shape now.

Terry attributes intermittent fasting to his incredibly youthful-looking physique. If you haven’t tried it, why not follow Terry’s diet and workout program and discover its benefits for yourself?