Dwayne 'The Rock' Johnson annihilated a recent chest workout after grinding away at the gym, "great one today, raised the bar". 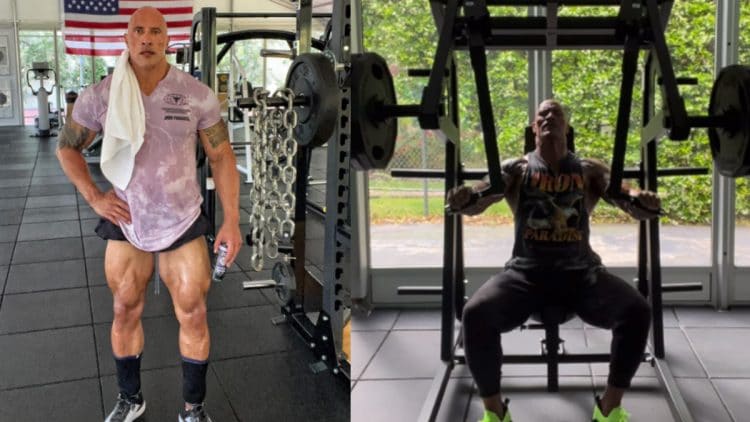 Dwayne ‘The Rock’ Johnson is one of the busiest actors in Hollywood today, but still maintains a rigorous fitness schedule. In a recent post published on Instagram, The Rock shared his ‘intense’ chest day finisher workout routine consisting of quality, controlled reps on the seated chest press machine.

Dwayne Johnson amassed worldwide popularity following his successful professional wrestling career in the (World Wrestling Federation (WWF). He took on his first lead role in the acting industry in 2002 with the sword and sorcery film, The Scorpion King. Dwayne Johnson is widely regarded for his charismatic personality and commitment to living a healthy life courtesy of proper dieting and exercise. The popular actor routinely shares motivational posts and workouts at his home-based gym dubbed ‘Iron Paradise‘. According to The Rock, maintaining consistency in daily exercises is what has enabled him to achieve his goals in life.

The Rock is known for his relentless work ethic as well. He commonly features his workouts on social media and thinks of exercise at his Iron Paradise gym as therapy. Regardless of the time of day, The Rock has no problem applying himself when it comes to fitness. Blasting his traps with barbell shrugs, the former wrestler is accustomed to pushing through pain anytime he picks up weights.

In order to achieve a physique as ripped as The Rock’s, he mentioned in the past that slow and controlled reps during exercise have helped immensely. The movie star is adamant that lowering the tempo on the negative portion of each repetition increases time under tension. In typical circumstances, that would equate to lower weight and higher volume. However, judging by his recent chest workout, The Rock is utilizing a heavier load and fewer reps in order to maximize his pump on the seated chest press.

The Rock Concentrates on Quality of Contractions

In a recent Instagram post, The Rock shared his brutal chest and back workout on the seated chest press machine. Johnson hits 20 reps per arm with controlled negatives. He follows that up with dual reps until fatigue with 3-second negatives.

“Great chest finisher closing out my chest training today.
Alternating 20 reps per arm with controlled negatives, then dual reps to fatigue with 3 second negatives.
* on Saturday’s I usually train chest + back together and concentrate on quality, controlled reps for an intense pump as well as bringing the volume down since they’re major body parts to not overwork.
Great one today.
Worked hard.
Raised the bar. Have a productive weekend, my friends 💪🏾 and crush your cheat meals!!💀😈” The Rock posted.

The Rock believes that spending more time under tension allows him to get a better concentric contraction. The strategy is simple but effective for building muscle. Johnson is always looking for the best methods possible to employ during his training sessions and places high value on the mind-muscle connection.

Johnson is set to appear in the upcoming superhero movie, Black Adam. He is making sure that his physique is on par with what Hollywood expects from one of the busiest and most fit actors in the business.

While he enjoys his signature cheat meal from time to time, The Rock is marveled for his ability to maintain a ripped physique year-round. Focusing on quality, controlled reps, Johnson is continuing to make gains to his physique despite maintaining one of the busiest schedules in the film industry.

Andrei Deiu is a Romanian IFBB Pro bodybuilder, fitness influencer, and entrepreneur. He is currently traveling around the world to train...