The four-time Mr. Olympia revealed his go-to breakfast meal along with the supplements he takes every morning 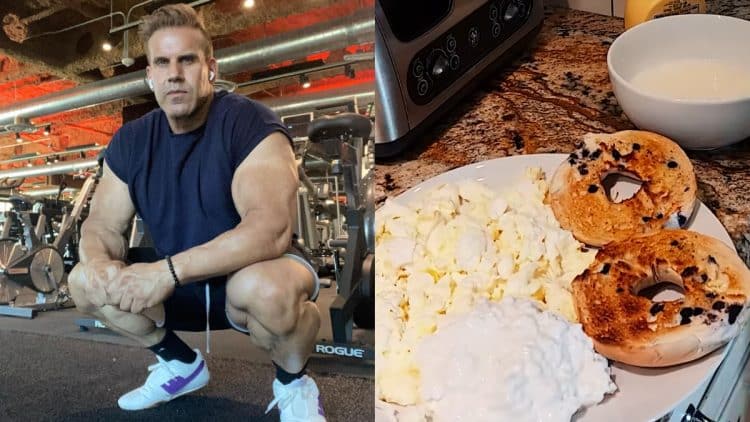 Jay Cutler is widely considered to be one of the best athletes in the history of the sport. In a recent video posted on his YouTube account, Cutler shared his ‘breakfast of champions,’ and revealed the foods and supplements he takes every morning.

Cutler competed in the Men’s Open division, which hosts some of the freakiest mass monsters. He helped usher in a new wave of bodybuilders by dethroning the eight-time Mr. Olympia Ronnie Coleman with his impressive size and detailed conditioning.

Although he has moved on from competing on stage, Cutler has maintained his presence in the bodybuilding community. He regularly shares his experiences in the sport and helps the new generation with achieving their fitness goals. Recently, he teamed up with fitness influencer Jesse James West for a grueling chest workout. Cutler also coached Jesse through a posing routine that he liked to use.

The four-time Mr. Olympia regularly uploads videos of his workout routine and diet regimen online. With over 561k subscribers on YouTube, Cutler keeps his followers updated on his activity. While he may not be as big as he used to be, he still trains hard in the gym and showed as much with a back workout he shared with his fans.

In a recent video uploaded on his YouTube account, Cutler shared a breakdown of his first meal in the morning, detailing each food he likes to take. He also recommended some personal methods to bring flavor into the meal and gave insight into the supplements he takes in the morning.

“2 over easy eggs. Actually, I’m going to have some egg whites. Normally, I drink these but I’m actually going to cook them. Alright so (grits) is going to be the carbs along with the bagel. I used to eat oatmeal and then when I started working with Hani in 2008-09, he switched me to grits just because it was a little faster on the digestion. It seemed to sit better with my stomach. What I’ll do is, I’ll have a packet of grits and I’m going to put a banana. We have a lot of bananas over there. Angie is supposed to make muffins. I don’t like to overcook my eggs.

Cutler showed the final touches he likes to put on the meal to make it more palatable.

“Let me show you how I flavor this, a little butter spray, little pepper, salt it a bit.”

Jay revealed the supplements he takes in the mornings.

“The next thing over here, these are the supplements I take, a couple Triumph every morning, test booster. Take one glucose, probiotics, three, multivitamin, three, anti-inflammatory cur cumin and then my essential fats. This morning I woke up and took the cognition. This is going to be my go-to.”

Last month, Jay Cutler sat down with Mark Anthony to analyze the Men’s Open division contestants for the upcoming 2022 Mr. Olympia. He believes there’s a new wave of talent coming and backed last year’s top five as the favorites going into the biggest show of the year.

RELATED: Bodybuilding Legend Jay Cutler Reacts to 2023 Arnold Classic Removing Divisions: “They Did it Without a Real Explanation”

8 Best Lower Back Stretches for A More Mobile Spine