The Rock continues to train 'with a chip' on his shoulder, adding muscle mass to his frame for his role in Black Adam. 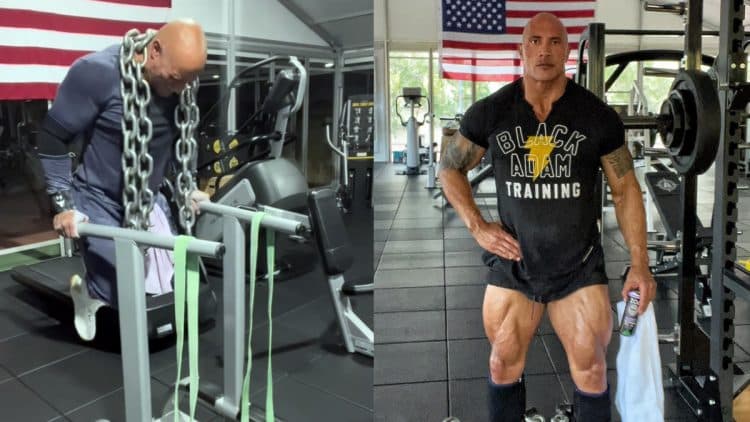 Dwayne Johnson, well known as The Rock, is one of the fittest actors in Hollywood with an unyielding dedication to improving his physique. In a recent post made to Instagram, The Rock is ‘burnin’ the midnight oil’ with weighted dips to build his triceps.

After making a name for himself as a professional wrestler, The Rock ventured into Hollywood, determined to dominate another entertainment landscape. The famous actor is now focusing his attention on the green screen and staying incredibly fit. As of late, The Rock was tasked with improving his physique for a movie role in DC’s Black Adam. The film required him to play a buff superhero, so The Rock has been steadily adding muscle mass to his frame since taking on the ambitious role.

Taking to his home gym, Iron Paradise, the 50-year-old has spoken in length about his goal of always being the hardest worker in the room. Luckily for his massive fanbase, The Rock shares his workout routines and dietary choices online. He recently demonstrated Pit Shark squats, a high-volume finisher designed to build bigger and better legs. One of the most important takeaways from each workout the celebrity shares is that he favors slow and controlled reps to get the most out of each contraction.

Maintaining one of the best physiques in Hollywood is no easy task, and The Rock says that maintaining consistency in daily workouts has kept him brimming with motivation throughout his illustrious entertainment career. Instead of showing off his infamous ‘walk of hell‘, The Rock recently got busy with weighted dips, draped with chains around his neck.

The Rock Motivates with Weighted Dips Workout: “The Chip on This Shoulder Never Goes Away”

In a recent Instagram post, The Rock shared his latest ‘midnight’ therapy session and can be seen pushing the pace with weighted dips.

“Saturday night.
Burnin’ the midnight oil.
The chip on this shoulder never goes away.” The Rock wrote.

The video shows Johnson practicing a set of triceps dips with two chains over his shoulders. Once he completes the first set, The Rock opts to drop one of the chains on the ground and proceeds with his workout. Before finishing, he shrugs off the second chain so he can perform reps without any added weight. Since Johnson started the workout with a maximal load and decreased it over time, he is dropsetting the movement, which enabled the actor to continue pushing out additional reps to maximize his results.

During the latter end of the workout, Johnson’s focus shifts to high-volume with lower weight. During these slow and controlled movements, The Rock accentuates the negative motion during the exercise to get the most out of each rep.

The Rock has stressed the importance of a healthy diet when it comes to building muscle. In the past, he’s shared a ‘power + energy’ protein breakfast he favors, which consists of steak, eggs, oatmeal, and five PB&Js. Johnson enjoys high protein meals like these following any leg day session.

With Black Adam releasing this October, The Rock plans on looking as burly as possible for his upcoming movie role. After blasting his triceps with weighted dips during a midnight training session, Johnson continues to prove why he has one of the best physiques in Hollywood.