The famous actor and wrestler equates his midnight workout to a therapy session. 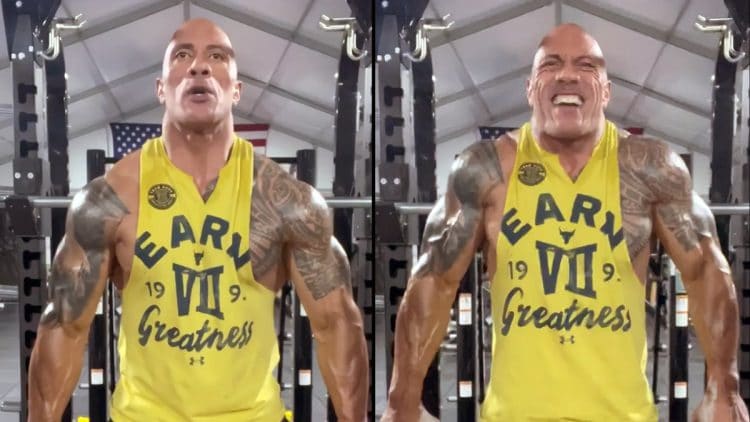 All business at the gym, Dwayne “The Rock” Johnson is known to push his body to extremes in order to achieve his mountainous physique. Recently the movie star shared a clip on Instagram of a midnight training session where he shared a shrug exercise to help build his already massive traps.

Following an 8-year stint in professional wrestling, The Rock took his services to Hollywood. Known for his relentless work ethic, the celebrity trains daily and understands the commitments necessary to maintain the type of frame that he walks around with.

The Black Adam actor was recently seen practicing a workout routine that usually doesn’t make the cut into his notorious training videos. With Black Sabbath’s “Iron Man” blaring in the background, The Rock gets to work with his own special kind of therapy.

Taking to Instagram, The Rock shared a strenuous shrug routine accompanied by a barbell. An undisclosed amount of weight appears to be attached to each side. The superstar is noticeably grunting during the clip as he paused during a few of the 7-reps shown below. Listening closely, you can hear The Rock’s signature chains clanking in the background to provide additional resistance to his workout.

• In 1995, I earned my college degree in May and ready to go out and tackle the world.

• By October, I was dead broke with $7 bucks in my pocket.

• Got hit with a month of depression and by Thanksgiving,
I said “Fuck this ~ I’m broke as hell, but one day I won’t be” and I pulled myself out of the funk and got my ass to work.

These days I’m not broke, BUT I keep daily mental reminders all around me, as guidance and motivation.

May seem crazy, but it works for me.
I know it works for a lot of you too.
Have a productive day.” The Rock shared.

The shrug is a great exercise for building the traps. This exercise provides maximal benefits if done under control and with better technique. The movie star is seen dipping while lifting a barbell with a heavy load and he finishes the routine with solid form.

During The Rock’s routine, he practices good fundamentals by first simply raising the weight up and down. In addition, he is looking straight ahead which is keeping the spine in a neutral position allowing him to engage the traps correctly.

RELATED: The Rock Shared “Walk Of Hell” Routine With 120-Pound Chains Draped Around His Neck

Even at midnight, the grind never stops for The Rock. The superstar’s shrug workout routine is cathartic for him and an ideal way to work out the traps. Treating the gym like his own therapy session keeps The Rock motivated regularly.