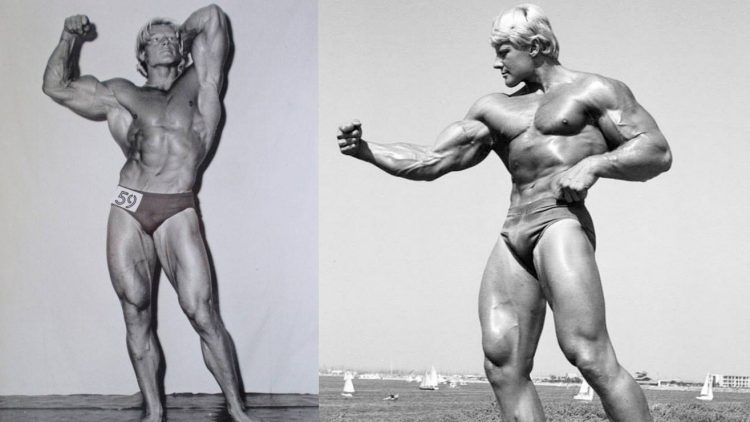 Dave Draper was born in Secaucus, New Jersey. His weight training began at the age of ten and was a well-formed habit by the time he was about twelve, in the mid-1950s.

In the mid-to-late ‘60s, Dave Draper, “The Blond Bomber“, came to personify the California blond beach boy muscle ideal that holds sway to this day. An overweight teenager, he set about a transformation that progressed to carving a massive, shapely and spectacularly tapered physique.

In high school, he participated in wrestling, gymnastics, and swimming, but was most inspired by training with weights. At 21, he won the Mr. New Jersey title. Six months later he moved to Santa Monica, California, working for the Weider Barbell Company until 1969. During this period he also worked in motion pictures.

In California, Draper initially trained at a gym many called “The Dungeon”, which he described as a large, awful space dug out of the ground on the corner of 4th and Broadway, and later at the original Gold’s Gym. Training partners included Frank Zane, Arnold Schwarzenegger, Franco Columbu and Mike Katz.

He began his climb to bodybuilding stardom, in the process annexing the 1965 IFBB Mr. America, 1996 IFBB Mr. Universe, and 1970 IFBB Mr. World titles.

He had a substantial role as an aspiring bodybuilder in the successful movie “Don’t Make Waves” (1967), which starred Tony Curtis, Claudia Cardinale and ill-fated Sharon Tate. Known as a free spirit, Draper drifted away from the bodybuilding mainstream in the ’70s but returned in the ’80s. Renowned as one of the sport’s gentlemen, he married wife Laree in 1988 (webmaster of his official website davedraper.com).