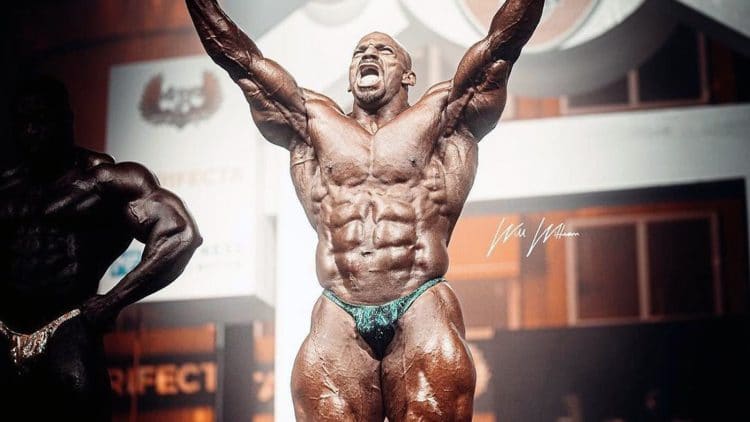 Big Ramy (Image via @w_wittmann on)

Mamdouh “Big Ramy” Elssbiay wins Mr. Olympia 2021. Although he did not come in peak conditioning during the pre-judging round, he quickly made up for it during the individual posing routine and final showdown on Saturday.

We have had a new Mr. Olympia champion every year since 2018 when Phil Heath lost his throne to Shawn Rhoden. But Ramy, with his second Mr. Olympia title win, puts a halt on the Sandow trading.

The Mr. Olympia showdown is arguably the biggest attraction of the Olympia weekend. Since Mr. Olympia is the biggest and most prestigious bodybuilding show, the athlete who wins it is considered one of the greatest bodybuilders of all time.

Although 19 athletes went head to head for the Mr. Olympia throne, Big Ramy, Brandon Curry, Hunter Labrada, and Haddi Choopan were being considered the front runners for the 2021 Mr. Olympia title.

Big Ramy stirred up excitement at the 2021 Mr. Olympia Press Conference with his “winter is coming” reference (a famous Game of Thrones dialogue). Ramy said the same thing before conquering the 2020 Mr. Olympia title. He then added to the fans’ exhilarating by posing to GoT’s official soundtrack at the pre-judging on Friday.

Big Ramy was the defending champion at Mr. Olympia 2021. He looked way better – dryer and harder, compared to what he did at pre-judging. Big Ramy’s posing routine was flawless and a treat to watch.

After a long time, we have a reigning Mr. Olympia champion.

Brandon Curry came with the motive of re-capturing the Mr. Olympia throne. And we have to say he came really close.

He had one of the best musculature, balance, and symmetry amongst all Mr. Olympia 2021 contestants.

According to us, no other Mr. Olympia 2021 finalist had back and quads like Hadi Choopan. He was also the only Mr. Olympia 2021 athlete to do a vacuum pose, and as you might know – we love the vacuum.

Haidi Choopan proved his popularity in the bodybuilding world by winning the People’s Champ award two times in a row.

Hunter Labrada has a great genetic structure that he has successfully built on. One of the things that could have worked against Labrada is that he started sweating during pre-judging posing. On the brighter side, he got harder and dryer during his posing routine and final showdown because of the sweating.

Nick was arguably the best poser on Mr. Olympia 2021 roster. We can only imagine the time he spends in front of a mirror nailing his poses. Nick Walker’s muscle maturity at 26-years-old justifies his nickname “Mutant”. It was one heck of a Mr. Olympia debut for Nick Walker.

But by the final pre-judging callout on Friday, only two athletes were going head to head for the Mr. Olympia throne – Big Ramy and Brandon Curry.

Things changed on Saturday when judges had Big Ramy, Brandon Curry, Hunter Labrada, and Hadi Choopan go through the routine poses to make the final call on who would lift the Sandow at Mr. Olympia 2021.

Fitness Volt congratulates Big Ramy on his Mr. Olympia 2021 win. He truly brought an exceptional package to the contest. Big Ramy has set the bar even higher for next year’s Mr. Olympia contest, and we are already looking forward to it.

Do you agree with Mr. Olympia 2021 results? Who do you think should have won the title? Let us know by tagging us on social media and in the comments below.

2021 Mr. Olympia Results For All Divisions