Here are all the details for the highly anticipated Strongman event this month. 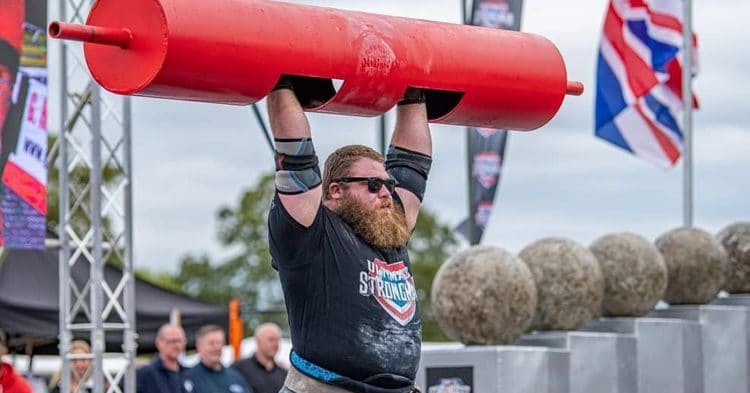 Competitors and fans alike are preparing for the UK’s Strongest Man set to take place May 29-31, 2021 at Stadium MK in the Bletchley District of Milton Keynes.

This highly-anticipated event will feature the world’s best Strongman athletes and unlike last year’s competition, fans can attend. In addition, it’ll feature a new challenge unfamiliar to participants – the Van Hold.

Pro Strongman and host of World’s Ultimate Strongman Feats of Strength, Laurence Shahlaei, has the inside scoop and recently shared a video alongside wife Liz on the Big Loz Official channel where they discussed details of the upcoming event that includes the events/format, athlete line-up, and how you can watch.

To start, they wanted to clear up any confusion by explaining the difference between Britain’s Strongest Man (BSM) and UK’s Strongest Man. Run separately, BSM is under Giants Live and qualifies athletes to advance to the prestigious World’s Strongest Man (WSM).

UK’s Strongest Man is not a WSM qualifier but more athletes can compete by winning regionals and it still gives competitors great exposure at the highest level.

There will be 16 athletes participating over the course of the three-day UK’s Strongest Man event.

The first two days are qualifiers with eight athletes divided into two groups: A and B.

The competitors in each group will compete against each other in four events. The bottom three will compete in what’s called an Eliminator and one will advance to the quarterfinals. This same process will continue with the remaining athletes.

What will be especially challenging about this competition is that points do not carry over from previous days’ events so each day starts fresh. It’s a little tricky with this format because you have to find a good balance of doing enough but possibly not too much.

The remaining four from group A and B will advance to an eight-man final where the athletes will compete in five events.

Now for the events that will take place over the three days.

Shahlaei mentioned how physically taxing this event will be especially on day one because athletes will have to compete the next day. But he thinks competitors who do well in the first two events may not have to suffer for as long.

Atlas Stones – Athletes race through 100-160 kg stones and the fastest wins. The winner will advance and the bottom two will be eliminated.

Alright, moving on to the next phase of the competition.

Car Roll – Athletes push a car over and keep rolling it

Shahlaei thinks Strongman legend Mark Felix will do well at this event because he has big hands and powerful gripping strength.

Sack Carry –  Athletes have to carry a 180 kg sack for distance.

Truck Push – Athletes have to push an 8.5 tons truck for 20 meters

Carry and Drag – Anvil Carry into an Anchor Drag with a 75-second time limit.

This is the last event for the title and it’s going to be very grueling.

We included the names of athletes competing under their assigned groups: A or B.

A little over a week ago, event details were revealed for the 2021 World’s Strongest Man that will take place June 15-20 in Sacramento, California. It will also feature a new challenge’ “Titan Table” so this year seems to be filled with lots of treats and it may just be getting started.

The 2021 UK’s Strongest Man is going to be held outdoors and spectators are allowed which is exciting for everyone.

We will be sure to keep you updated on this event,