The official events and lineup for the 2022 Arnold Strongman Classic have been released. 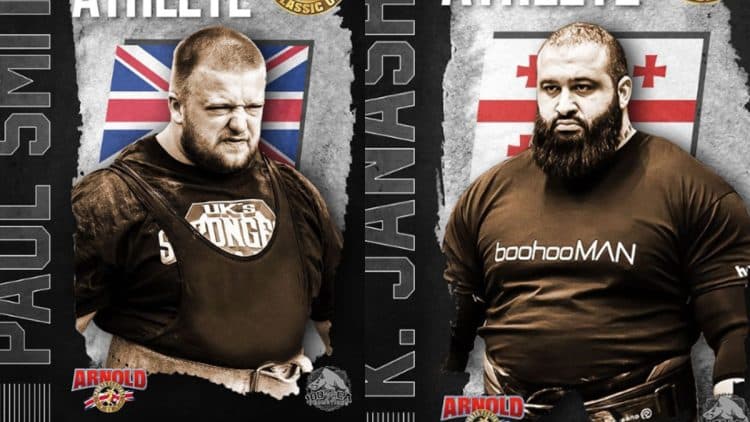 The 2022 Arnold Strongman Classic UK will take place on Sep. 23-24, in Birmingham, England. A total of 12 athletes will compete in six events to determine the champion. Evan Singleton won the competition last year, but he won’t get the chance to defend his title this time.

The official Arnold’s UK Instagram page only announced Paul Smith as a competitor, but they pointed out that Laurence “Big Loz” Shahlaei would reveal the rest on his YouTube channel.

Big Loz did not reveal the events in the order that they will be performed in the competition, as he is not yet familiar with those details.

The Super Yoke will weigh 500 kilograms (1,102.3 pounds) and is called ‘The Beats Yoke’. It is named after Eddie ‘The Beast” Hall and his record-breaking deadlift of the same weight. The newcomer, Mitchell Hooper, has proven that this is one of his greatest events.

The deadlift event in the 2022 Arnold Strongman Classic UK will require the athletes to perform as many reps as possible with 370 kilograms (815.7 pounds). Rauno Heinla has broken the deadlift for reps event World Records in competitions previously, while Janashia and Pritchet are also notorious for amazing performances.

Big Loz has not revealed what the weight of the sandbags will be, but the Strongmen will have to throw a series of sandbags in the shortest time possible. It is hard to predict who will be the favorite, as the weight of the implements could change everything drastically.

The dumbbell will weigh 100 kilograms (220.5 pounds), and the athletes will attempt to lock it out above their head as many times as possible. No one in this lineup is a specialist for this event. Those with full body strength and technique will prevail here, but there are also athletes such as Bobby Thompson who can handle heavy overhead loads with ease.

This event from the 2022 Arnold Strongman Classic UK is very similar to the classic Dinnie Stones. Two Atlas Stones with Dinnie Stone handles will be used and they won’t be the same weight. One will weigh 160 kilograms (353 pounds), while the other one will be 130 kilograms (286.5 pounds). No one from the lineup has really publically shared a lift like this, so mentality and grip will be the most important.

The Atlas Stones will be the closing event of the 2022 Arnold Strongman Classic UK. The weight will range from 120 kilograms to 200 kilograms,  while the height of the platforms will gradually drop from 5-foot to 4-foot.

The prize pool for the 2022 Arnold Strongman Classic UK will be £62,000 ($74,178). Of that total, the winner of the show will receive £30,000 ($35,892), while no athlete will go home empty-handed. The competition overall is of a high level, and the competitors will have a strong reason to compete to the best of their abilities. The events, however, also seem interesting, which should make the show very enjoyable.