Andrea Shaw repeats as the Ms. Olympia winner in 2021. 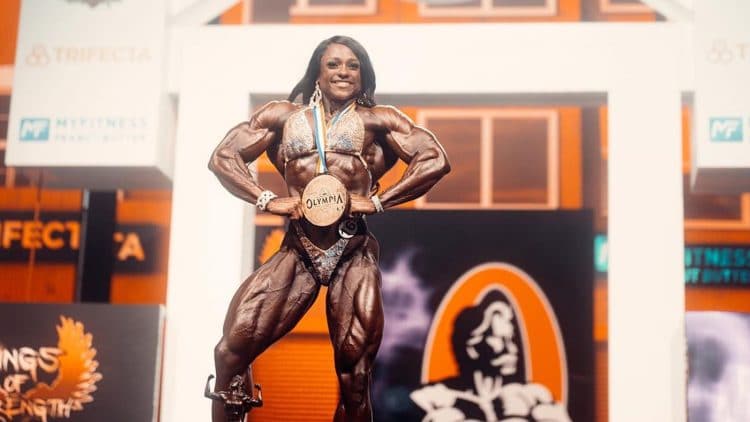 Andrea Shaw wins the 2021 Ms. Olympia title. She took home $50k in prize money and once again, the prestige that comes along with being the best female bodybuilder in the world. The contest took place on Friday, October 8, 2021, during Olympia weekend at the Orange County Convention Center in Orlando, Fl.

But it would be 37-year-old Shaw who’d ultimately prevail victorious over the rest, although Trevino was very impressive too with Margie not far behind.

During her teen years, a young and overweight Andrew Shaw started training at the gym after convincing from her mother. Taking training advice from her mother’s bodybuilding friend, competing had never crossed her mind as she wanted to pursue a career in modeling. However, she didn’t meet the height requirements.

But like many who become inspired to take their fitness seriously, the Detroit, Michigan native discovered an Oxygen Magazine that featured impressive physiques.

But what the future champion didn’t realize was that she had superior muscle-building genetics for bodybuilding. However, her ambitions were to look like that of a Figure competitor who aren’t quite as muscly.

Competing in Figure and not quite feeling it, Andrea moved to Physique, where she earned Pro status but it was clear she was more suited for Women’s Bodybuilding.

After advice from legends such as multiple-time Ms. Olympia Lenda Murray and Margaret Marvelous (Margie Martin), she switched to Bodybuilding and what a spectacular journey she’s had.

With the relaunch of Women’s Bodybuilding at the Olympia last year, it was one of the most highly-anticipated events with fans and organizers looking forward to seeing the world’s biggest and most muscular female competitors take the stage.

Ten-time Ms. Olympia champion (Most wins at Olympia men or women) Iris Kyle was slated to make her return in 2020 after her last win in 2014 and before the discontinuance of this contest at the Olympia.

However, she’d have to withdraw from the show due to health issues, and also would not compete in 2021.

But even without the legendary bodybuilder, there was no shortage of elite physiques with Andrea Shaw, Margie Martin, and Helle Trevino to duke it out for the top three spots.

Well, Shaw ended up winning her first Ms. Olympia title with Martin coming in second and Trevino third. We didn’t think much would change this time around regarding who’d place near the top.

To come out victorious once again with such a dangerous lineup of competitors is extremely impressive. This year’s Ms. Olympia competition was stacked but it sure delivered.

It’s also important to acknowledge all of the competitors from this division who showed up and gave it their all.