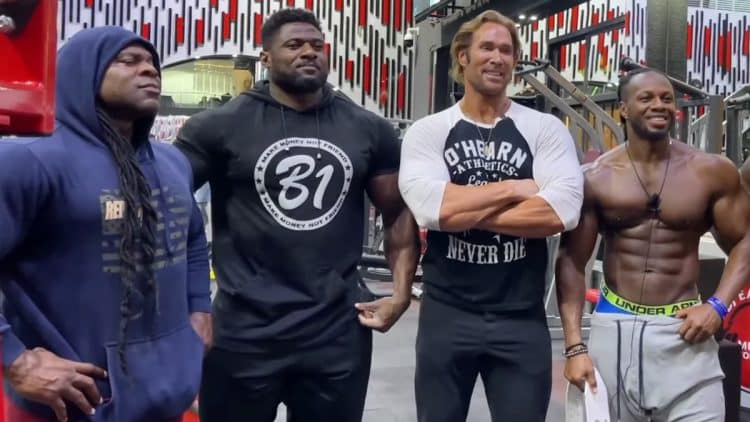 It’s not often that a bodybuilder with so little professional competition experience gets so much attention in bodybuilding. Putting in consistent effort, Andrew Jacked is preparing so that he can prove the hype real and make a splash at the 2022 Olympia. Chinedu Andrew Obiekea, popularly known as Andrew Jacked, is a Nigerian IFBB Pro bodybuilder that competes in the Men’s Open division. Since earning the IFBB Pro card with a dominant win at the 2022 Arnold Classic Amateur, the 37-year-old has become one of the highly touted prospects in the sport of bodybuilding. The Nigeria native improved his physique in the months that followed and absolutely starched the completion at the 2022 Texas Pro. The win earned him a direct qualification for the 2022 Olympia.

It is believed that Andrew’s meteoric rise is due to his excellent aesthetics and massive 6-foot-2-inch frame. Bodybuilding legends Jay Cutler and Flex Wheeler are among the people that believe Andrew Jacked has a real chance to upset the reigning Mr. Olympia champion Mamdouh ‘Big Ramy’ Elssbiay. Veterans Chris Cormier and Samir Bannout also believe that the Nigerian bodybuilder can beat a lot of top-tier competition.

Andrew Jacked is doing a fantastic job of carrying this burden of hype and expectations on his shoulders. As his Olympia prep continues, the 37-year-old recently went through a chest and biceps workout with his friend David. The video of this session was uploaded on Andrew Jacked YouTube channel.

Andre Jacked goes through a chest and biceps workout

The Nigerian bodybuilder warmed up the upper body, especially the rotator cuffs with a few dumbbell movements and jumped into the chest workout.

Bench Press is the most effective chest exercise and ranks at the absolute top in terms of pectoral muscle activation according to many studies. Additionally, it is a compound pushing movement that activates other muscles in the upper body and helps improve overall upper-body strength.

Andrew Jacked took to this exercise first and did the warm-up set without loading any weight on the barbell. He then did the working sets with incrementally heavy loads. Andrew did the top set with three plates on each side and took to the next exercise.

The 2022 Texas Pro winner next performed this incline pressing movement to work the upper pecs which is the clavicular head of the pectoralis major muscle in the chest.

He did one working set of this exercise with 50kg dumbbells and took to a superset next.

Pressing movements improve the body’s ability to push the weight. On the other hand, flyes develop the ability to adduct which is contracting your chest and shoulders towards the central axis of the body. Many studies have shown that pressing movements are more effective in pectoral muscle activation compared to flyes. However, it is important to include both movements in the chest workout for a balanced and functional development of the chest.

Andrew next performed a superset of seated chest flyes and pec deck flyes for working the pectoral muscles next. He performed three to four working sets of both exercises in rapid succession with minimal rest periods.

The Nigerian next took to the chest press on a Hammer Strength Iso-lateral plate-loaded machine. Both the arms of this machine attach to separate weight stacks and move independently. This helps eliminate strength imbalance even when the exercise is performed with both arms at a time as the stronger side cannot compensate for the weaker side to lift the weight. Andrew Jacked did some working sets of this exercise to failure and went back to working with the flyes.

Andrew performed this exercise on a selectorized machine next. Supporting the antagonistic muscles against a surface during an exercise assists in isolating the muscle to a greater extent by avoiding jerking motions. Common examples can be preacher curls and standing hamstring curls. While speaking about the efficacy of resting the back during the flyes, Andrew Jacked said:

“It’s isolating because you lean your back and you can’t swing. Everything just goes in there to the chest.”

Andrew Jacked is doing everything in his power to make a statement in his 2022 Olympia debut. Recently, he trained under veteran bodybuilder Roelly Winklaar to push his limits which showed his burning desire to keep improving. If Andrew Jacked is able to add more definition to his muscles and bring a complete package to the stage, chances are that we might witness an upset at the 2022 Olympia stage.