Flex Wheeler and George Farah reflect on Andrew Jacked's latest victory at the Arnold UK and discuss his chances against Big Ramy at 2022 Mr. Olympia. 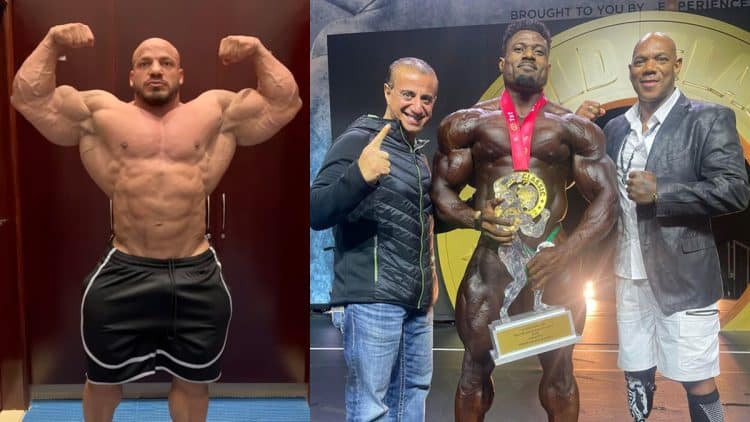 “If Ramy comes in the way he’s supposed to, it’s going to be hard, even for Andrew to beat him this year,” George Farah said.

Jacked emerged as a notable threat in the Men’s Open division after earning his Pro card at the 2022 Arnold Classic Amateur. Instructed by bodybuilding legend Flex Wheeler and diet guru George Farah, Andrew won his Pro debut at the 2022 Texas Pro. The victory saw him defeat third place finisher Steve Kuclo and runner-up Martin Fitzwater. While his Texas victory earned him an invite to this year’s Olympia, Andrew opted to compete one more time.

Roughly a month later, Jacked fulfilled his original plan of competing at the 2022 Arnold Classic UK contest. He won the show but was pushed by mass monster James Hollingshead in third and Patrick Johnson, who narrowly took second place.

Following back-to-back Pro victories, Jacked left the bodybuilding community stunned by his progress in such a short amount of time. One figurehead of the sport who took notice was four-time Mr. Olympia Jay Cutler.

According to Cutler, if Jacked dials in his conditioning, he has the potential to beat everyone at 2022 Mr. Olympia except Big Ramy. But it’s not just Cutler who sees Andrew as a threat, Farah and Wheeler also believe with the right prep, he could soon challenge for the Olympia title.

During the Olympia TV YouTube interview, George Farah started the dialogue by saying Jacked doesn’t use excessive amounts of gear when preparing for a show.

“If I tell you guys what Andrew Jacked as far as supplements and stuff, I’m not kidding you man. People that are getting ready for a state show — they probably use more. This is honest to God truth,” says Farah.

Wheeler agreed with Farah and mentioned that Andrew has less “mileage” on his body compared to the rest of his competition.

“Like George said, we’re never going to disclose Andrew’s personal business but you have to understand — how many times has he competed in his life. Even myself, I competed probably over 40 times as an amateur before I even got into NPC because I was back in the AUU days. I was learning. I was developing

Flex added that no one, including himself, has been able to do what Andrew has done since emerging as an IFBB Pro.

“And we still have approximately 11 weeks to get ready for the Olympia. He has less mileage than any competitor that he’s ever competing against or ever going to compete against. That right there tells you this young man’s potential. Because no one, even myself, has done what he’s done in such a short period of time. That’s damn scary,” Flex Wheeler explained.

Andrew Jacked on 2022 Mr. Olympia: “Everything About My Back Shots Has to Be Improved”

Jacked believes he has to improve his back and get more confidence while posing in order to challenge for the Olympia title.

Wheeler believes height and conditioning are two factors that can affect Ramy’s placing at this year’s Olympia contest. In addition, Flex added that Andrew has better symmetry and balance than the reigning champion.

“You’re right, Ramy is the person to beat. But now you’re going to have guys competing against him that are taller than him and matches his mass. I’m going to argue and say possibly, I’m being nice, but he possibly has better symmetry and balance that he [Ramy] has,” says Wheeler.

Similar to Phil Heath’s assessment, George Farah believes if Ramy leaves the door open like he did last year, plenty of contenders could take his title.

Wheeler and Farah agree that when Jacked is reaching his full potential, Ramy will ‘probably” be exiting the sport.

“It’s still about timing. Andrew has so much time under his shoulders. We’re not going to push him or put him in harm’s way because we know we have time on this fight. Even Ramy said in one of his interviews yesterday, when Andrew is coming to his full potential, Ramy is probably exiting the game.”

It should be noted that Ramy suggested he might retire in 2023 following one more Olympia contest. It remains unclear if that’s still his plan, as he appears more passionate about the sport than he was during previous years.

Many believe this year’s Olympia contest has the ingredients to be one of the greatest contests in the show’s history. Despite Ramy’s dominance, Wheeler and Farah suggest in time, Andrew Jacked will have a physique capable of claiming bodybuilding’s most prestigious title.