Bodybuilding veteran Chris Cormier believes Jacked will have a bright future in the sport and predicted he'll likely finish in the top-ten at this year's Olympia. 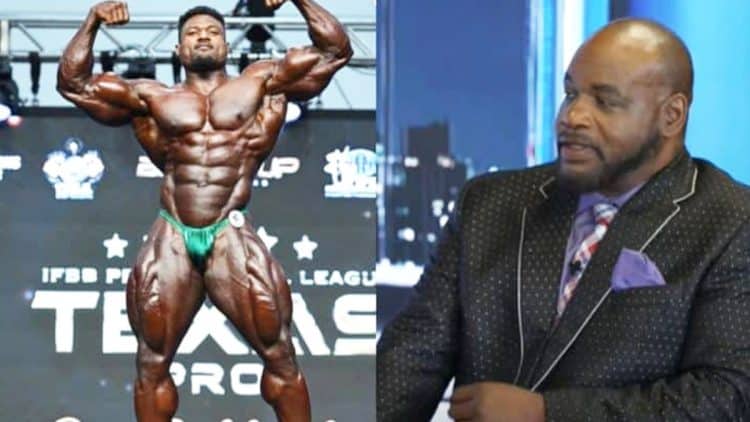 Bodybuilding Hall of Famer Chris Cormier left his mark on the sport before stepping away for good. In a recent YouTube video, Cormier examined Andrew Jacked’s (Chinedu Andrew Obiekea) physique and discussed his potential at 2022 Mr. Olympia.

It didn’t take long for the bodybuilding community to take notice of rising Men’s Open star Andrew Jacked. He’s coached by four-time Arnold Classic winner Flex Wheeler and guru George Farah. In March, Andrew secured his Pro card in dominant fashion at the 2022 Arnold Classic Amateur contest. A few months after building his physique, Jacked put his skills to the test at a pair of pro competitions.

The 6″2′ Nigerian native brought the heat when he stormed the 2022 Texas Pro stage. Jacked won his first Pro show handily en route to defeating veteran Steve Kuclo as well as the young and hungry Martin Fitzwater.

Andrew’s original plan was to compete at the Arnold UK months later, although Visa issues jeopardized that plan for a moment. Nevertheless, Jacked showed up and steamrolled the contest, marking his third bodybuilding victory.

Following his impressive season, several figureheads and veterans of the sport have discussed his potential. One of which was four-time Mr. Olympia Jay Cutler, whose confidence in Jacked grew as the bodybuilder continued to find success. Cutler envisions Jacked beating everyone at 2022 Olympia with the proper improvements except two-time reigning champion Mamdouh ‘Big Ramy’ Elssbiay.

Chris Cormier is the latest veteran of the sport to discuss Jacked and his meteoric rise in the IFBB. With bodybuilding’s most important event of the year less than three months away, “The Real Deal” is taking a closer look at Jacked’s physique and how he might place at his first Olympia contest this December.

Chris Cormier Examines Andrew Jacked’s Physique: “I Would Like To See Clearer Lines”

“Yeah. Andrew Jacked is definitely jacked. I think it’s amazing that he only has a few shows under his belt to be where he is in the sport and to be looked at as somebody that could actually win it all one day. So, only competing a handful of times — that’s just unheard of in my time but I would like to see more depth to the body.

Depth to the back. I would like to see that thickness you know. I would like to see clearer lines. Just imagine his body front and back with all clear lines through it. Not them blurry — none of that. Just think about how much definition he has through here like Terrick said,” says Chris Cormier.

Overall, Cormier would like to see Andrew Jacked add more definition, especially to his back.

“I would like to see more definition, especially when he’s hitting the back double. It’s all good though — don’t get me wrong, this guy is unbelievable, Cormier said. “I would just like to see the whole thing come together.”

When picking apart Andrew’s lower body, Chris advised him to add more separation to his hamstrings.

“Well, I would like to see here [points to hamstring], this was at the Arnold Classic [Amateur], he was just turning Pro here. He had more development here,” says Cormier. “I would just like to see that [more separation on the hamstrings]. It’s just going to be some time.”

According to Cormier, slight adjustments to poses can make a world of difference on stage. He offered Andrew a few posing instructions.

“I like the definition he’s got [in his legs]. Just make that as deep as possible. That’s going to come from deep tissue massage,” Chris shared. “The thing is — as a master poser like myself, it’s not just sitting on it… it’s more like you’re applying pressure though his feet and forward at the same time, lowering the leg. That’s going to make the hamstrings pop more.”

After telling Jacked to apply pressure with his feet while posing, he suggested externally rotating the wrists while hitting a front double biceps pose. This will make his biceps appear to have more peak.

“His style of his front double, like myself, he’s got long arms. That’s got to be in his mind a little bit of mental, like, ‘okay, I don’t have short thick arms.’ But if you can rotate those knuckles, just bring them in. You’re externally rotating that wrist, not the elbow just the wrist. That’s going to give that peak a little bit more peak.”

Initially, Chris thought Andrew could sneak into the top five at 2022 Olympia later this year. However, upon further inspection, he said he’d be happy to see Jacked secure a top-ten finish at the prestigious event.

“I was super excited about this guy thinking top five a lot of times, I’m thinking, ‘top five!’ But be realistic, it’s very hard to compete four or five months later compete again and peak again.

So, that’s what’s going to be a hard thing to do. I mean, I would be happy to see him in the top ten for sure. If he could push closer to seven or whatever, that would be great,” says Cormier.

Following back-to-back Pro victories, Jacked and his coach promised the best has yet to come. Admittedly, Andrew says crafting posing routines tends to be his biggest challenge during contest prep. However, he and Farah agree that he will bring noticeable improvements to his physique at the upcoming 2022 Mr. Olympia.

This year’s Olympia contest is shaping up to be one of the most anticipated in years. Despite his status as a newcomer, Chris Cormier is confident Jacked will reach the top of the sport in due time.