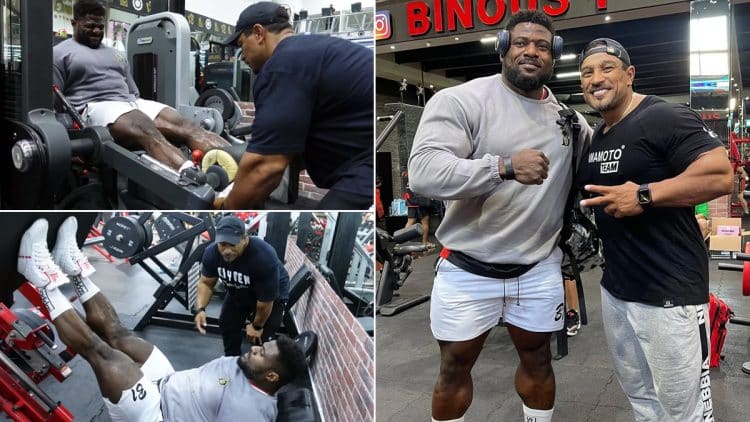 Bodybuilder Andrew Jacked recently trained under bodybuilding legend Roelly Winklaar for a leg day workout. Andrew is a Nigerian professional bodybuilder that earned his IFBB Pro card with a dominant win at the 2022 Arnold Classic Amateur. At 6ft-2in tall, he possesses one of the biggest physiques in the Men’s Open division roster. The Hulking Nigerian proved that the hype around his name was real when he stepped on stage for his first IFBB Pro show – the 2022 Texas Pro. Andrew Jacked starched formidable competition en route to a convincing win. This victory earned Andrew Jacked a direct qualification to the 2022 Olympia. Veteran bodybuilder Chris Cormier recently opined that the Nigerian has a realistic chance to finish in the top 10 at the 2022 Olympia.

Jacked recently joined veteran bodybuilder Roelly Winklaar to train under him for a leg day workout. Winklaar is considered among the best bodybuilders of all time. The Dutch phenom is a multiple-time Mr. Olympia participant that presented a tough challenge to the top five bodybuilders at the peak of his career. In 2018, Roelly finished third on the grandest stage of bodybuilding behind Mr. Olympia champion late Shawn Rhoden and former champion Phil Heath. However, his competitive bodybuilding career took a steep downhill turn in the year 2021 as he finished 11th at the 2021 Olympia and was placed ninth at the 2021 Romania Muscle Fest Pro. The Dutch Powerhouse has not competed since. While he has not retired officially, Winklaar has looked significantly downsized in some of his most recent appearances including the leg day workout video with Andrew Jacked.

Winklaar is currently coaching a number of other professionals, including Andrew Jacked through a high-volume leg workout as a part of the Nigerian bodybuilder’s competition prep for the 2022 Olympia. The video of this session was uploaded on Andrew Jacked’s YouTube channel.

Roelly Winklaar stated that this workout would aim at getting the blood flowing into the legs for a massive pump with high-volume training.

While speaking about this opportunity to train under Roelly Winklaar’s guidance, Andrew Jacked said:

“It’s a dream come true, it’s a pleasure, it’s an honor… It’s a privilege to be trained by Roelly Winklaar, it’s a lifetime thing!”

Andrew Jacked first warmed up the legs and knee joints with this quad isolation movement. Knees are crucial in performing most lower body movements and it is important to warm them up at the beginning of the workout. Jacked performed a few sets of this exercise as Winklaar observed the movement and moved on to the next one.

Roelly Winklaar guided Andrew Jacked through the plate-loaded machine squats next. Andrew did this exercise with an incrementally heavier load for each consecutive set. For the top set, he used knee wraps for assistance and then moved on to the next exercise.

Andrew Jacked next took to the leg press and pushed himself through the high rep sets as Winklaar helped him get the volume in. Leg press is a triple extension compound movement where there is a concurrent hip flexion, knee extension, and ankle plantar flexion. This movement works almost all the lower body muscles for complete development in terms of strength and muscle gain.

“A lot of people think that weight is the thing. But weight doesn’t count. It’s the exercise and how you do it,” Roelly Winklaar said.

The Nigerian bodybuilder started with partial leg Press and superset it with Heel Elevated Goblet plate Squats and walking Lunges. He used five different foot placements to do the partial leg press. Following this, Andrew did heel-elevated goblet plate squats and capped it with walking lunges. He repeated the rounds in rapid succession with minimal rest periods and went on to perform the finisher of the day.

Andrew Jacked took to the leg extensions next. He pumped the quads further with this isolation movement. It served as the finisher to the leg training session with Roelly Winklaar as Andrew Jacked wrapped up the workout after this exercise.

Andrew Jacked has gained a lot of momentum in the first year of his IFBB Pro bodybuilding career. His addition to the already stacked Men’s Open division roster for 2022 Olympia has made things a lot more interesting. Let’s see how he uses his tall frame and impressive physique to beat established names. All that remains is to wait until December 15th, when the 2022 Olympia weekend begins.

At this point, it is not clear if Winklaar will return to competition next year. However, the 45-year-old continues to guide other active bodybuilders and share his bodybuilding wisdom.