Newly turned IFBB Pro Andrew Jacked is making the most of his offseason with a massive deadlift training session. 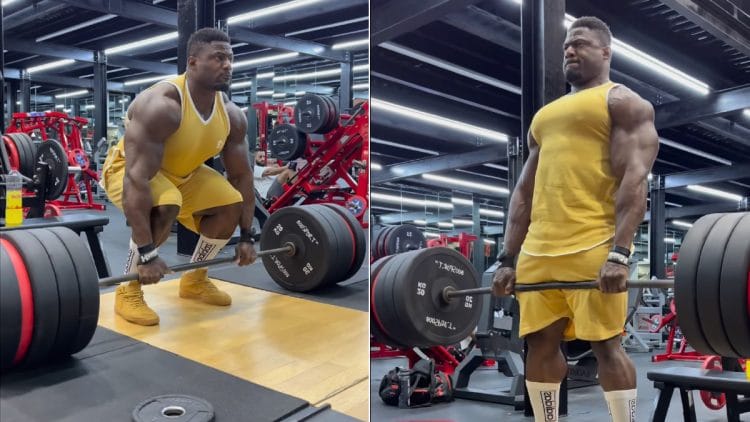 Andrew Jacked emerged as a serious threat in bodybuilding after earning his IFBB Pro card in Ohio last month. Featured in a recent Instagram post, Andrew demolished a huge deadlift for a total of six reps in training.

Andrew Jacked has already made a name for himself in the sport despite his rookie status. Jacked’s bodybuilding debut came at the EBBF Ajman Bodybuilding and Physique Competition where he won the competition. Following the success, Andrew crushed another show when he dominated at the IFBB Elite Pro League show last year.

In Jan., Jacked joined forces with seven-time 212 Olympia Flex Lewis and Milos Sarcev to practice posing and working out. Even back then, it appeared Milos understood the potential of Jacked, signaling that he would be a giant problem for any bodybuilder standing beside him. Andrew also received posing instructions from bodybuilding legend and four-time Arnold Classic winner Flex Wheeler in the lead-up to the Columbus, Ohio show.

Living up to the expectations that were placed on him, Andrew brought his show-stopping physique to the 2022 Arnold Classic Amateur and won the Overall Arnold Amateur Bodybuilding title. It appeared training with elite level talent paid off, as the six-foot-one bodybuilder secured his IFBB Pro card without much resistance. After the victory, Andrew earned an invitation to the 2023 Arnold Classic in the Men’s Open division.

Lifting with relative ease, Andrew Jacked took to Instagram and showed off his insane deadlift of 220 kg for six reps in training with a conventional stance. He performed the lift with wrist wraps.

“I personally stopped doing deadlifts since Nov 2020 because I felt I wasn’t doing it just right, had to study my body and the mechanics to get a 💯% effectiveness.

This is my first deadlift workout since I stopped and I did applied the knowledge and mechanics and it sure felt so damn good and light too😁. Hoping to break my PR soon of 310kg for 3. Yesszzziirrr !!” Andrew Jacked posted.

According to Jacked, he stopped doing deadlifts in 2020 to study his body so that he can learn how to hit the exercise with 100% effectiveness. This was his first deadlift since he stopped and described it as ‘feeling good and light’. Andrew intends to shatter his PR of 683 lbs (310 kg) for 3 reps very soon. Given his sheer size, when Andrew’s conditioning is on point, he will be very difficult to stand next to on stage.

With plenty of time to improve his physique, Andrew intends to make a big splash in the IFBB Pro League in due time. Given his goals of one day competing on the Olympia stage, it looks as though Andrew is making the necessary sacrifices in training to one day reach that goal.

RELATED: WATCH: How To Deadlift And Avoid Mistakes – The Official Deadlift Checklist

Andrew continues his off-season efforts with some insanely heavy deadlift reps. While there is no event or show currently on the docket, Jacked is making sure to get the most out of his recent training session.