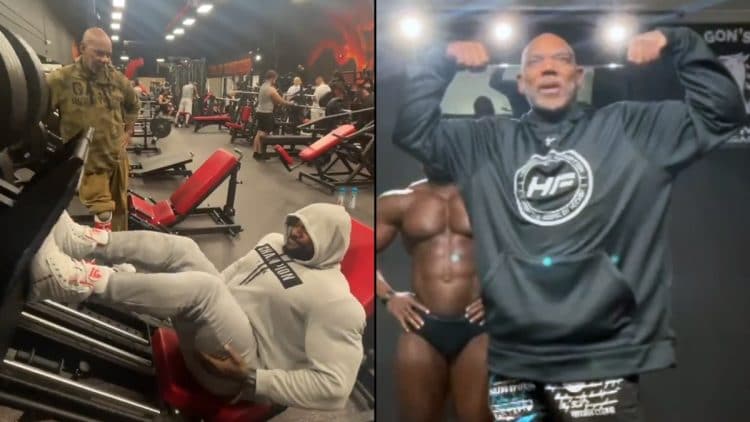 If anyone can be of assistance for Jacked, it’s Flex Wheeler. The retired bodybuilder made waves during his tenure in the sport. Given that Wheeler managed to win the Arnold Classic a total of four times (1993, 1997, 1998, and 2000), it stands to reason that he will provide incredible insight for Jacked during the leadup to the event.

In order to get himself ready for the big show, Andrew Jacked has been getting some coaching advice from Flex Wheeler. Not only that, he had recently trained with 212 Olympia champion Flex Lewis and bodybuilding icon, Milo Sarcev too.

As of late, Jacked trained alongside Flex Wheeler again and the pair have good synergy when it comes to powering through gym sessions. The rising prospect shared a video on his Instagram page displaying him train with the four-time Arnold Classic champion.

This isn’t the first time that Jacked and Flex Wheeler trained together. The pair linked up in mid-December to help Andrew Jacked prepare for his 2022 bodybuilding season. Wheeler has been available to Jacked during his time in prep and those efforts are paying dividends with the Arnold Amateur show rapidly approaching. If Jacked manages to win the 2022 Arnold Amateur show, the bodybuilder will earn his pro card. Additionally, the victory would also lock up a spot at the 2023 Arnold Classic for Jacked.

Jacked’s physique is massive and the blue-chip prospect looks to be in tremendous conditioning. Particularly, Jacked’s colossal upper body appears to be one of his strongest assets. Thanks to Wheeler’s mechanical posing check, Andrew Jacked is building upon his already promising future in bodybuilding.

Andrew is positioned to have an impactful year in the sport. In addition to posing techniques, Jacked also trains legs with Wheeler recently. The rising amateur has made gains since his physique update that surfaced eleven weeks before the upcoming Arnold show. Jacked has made noticeable improvements to his legs and especially his quadriceps and hamstrings. The depth of his leg muscles has changed over the months and his tear drops seem more pronounced in his latest physique update.

Bodybuilding is all about presentation. While one can build a great physique, that doesn’t always equate to winning shows or becoming a champion. If success in the sport was solely based on physique, we would have far more champions than we currently have. Impressing the judges through presentation remains a critical factor in determining the very best.

With the help of Flex Wheeler and a host of other bodybuilders, Jacked is taking a calculated approach to his season this year. The 2022 Arnold Classic Amateur show kicks off in roughly three weeks and Jacked is a front-runner to command the stage and win gold.

Kettlebell Front Squat: Muscles Worked, How To and Variations