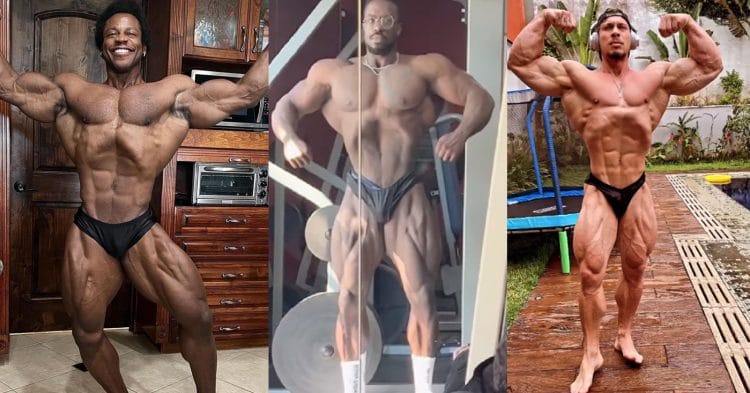 With the 2022 Arnold Classic set for early March, bodybuilders are sharing physique updates more and more as each day passes. Classic Physique competitors Breon Ansley, Terrence Ruffin, and Ramon Dino were the latest, and all three athletes look determined to win the show.

Taking place from March 3-6, the Arnold Classic returns to its home state of Ohio. Increased prize money hangs in the balance this year, and bodybuilders are leaving no stone unturned in preparation for the big show. As training heats up with the event approaching, fans can begin to speculate how their favorite athletes will perform.

With the second biggest show upon us, a trio of top bodybuilders are issuing physique updates with just three weeks to go until the big day. As working out intensifies before the show, a few Men’s Open competitors have already been weeded out. Bodybuilder Rafael Brandão withdrew from the competition in late January. Then, Nathan De Asha and Mohamed Shaaban bowed out due to injuries earlier this week.

Breon Ansley recently shared his physique on his Instagram page. Known for having a commanding stage presence, Ansley is certainly among the top names pegged as an early favorite to win the show.

Ansley made his name known in the bodybuilding community after an explosive 2017 season. Ansley managed to win first place at the New York Pro and also secured gold at Mr. Olympia. Following his monumental year in the sport, Ansley returned in 2018 and one-upped himself. First, Ansley won first prize at the Arnold Classic. Then capped off another incredible year by nailing his second Mr. Olympia title in a row.

After realizing major success in the sport, Breon competed in 2019 and won the Yamamoto Cup Pro. Ansley took his talents to Mr. Olympia again, and the Classic Physique competitor placed second. In 2020 and 2021, Breon Ansley competed in one major show, Mr. Olympia, and took home third place on both occasions. After coming so close to gold a number of times, surely, he’s reinvigorated to perform at his very best at the 2022 Arnold Classic.

Terrence Ruffin is Ready for a Big Year

Taking to Instagram, Ruffin issued a promising physique update, and his posing looks to be on point too.

“Confidence – a knowledge of what one is capable of doing based on evidence.
Heard this listening to The Daily Stoic on Spotify” Terrence Ruffin posted.

Terrence Ruffin’s bodybuilding career began to gather steam in 2019. The Classic Physique competitor secured first place at the Niagara Falls Pro. In 2020, Ruffin began competing more consistently at shows. Ruffin made appearances at the Arnold Classic and Mr. Olympia. Despite coming razor close to gold, Ruffin was runner-up in both shows.

Returning for the 2021 Arnold Classic, Terrence finally snapped his streak of runner-up appearances. The active bodybuilder secured first place at the Arnold and then took his talents to Olympia next. Unfortunately, Ruffin would once again place in second at the biggest bodybuilding show of the year. Looking to recapture the Arnold title, Ruffin has a chance to pick up where he left off at last year.

Ramon Rocha Queiroz is a popular Brazilian bodybuilder looking to steal the show this year. The Classic Physique competitor recently shared a video of his build on Instagram. Overall, Queiroz’s physique looks excellent, and the bodybuilder appears to have his body close to being stage-ready with still three weeks to go before the show.

“My war is within me, against my demons, against my weaknesses, pains, one victory a day, I keep fighting undefeated!” Ramon Rocha Queiroz shared.

Ramon Rocha Querioz garnered a lot of attention in 2021. The rising Brazilian athlete captured gold at the Europa Pro Championships. After gathering momentum, he took his services to the biggest show on earth, Mr. Olympia. After placing fifth at Olympia last year, Queiroz is eager to improve upon his physique.

While training for the Arnold, Queiroz has kept fans on the pulse with consistent physique updates. Despite having less experience than many of the bodybuilders who he plans to compete against, Queiroz is a legitimate threat to the Arnold Classic crown this year.

Final preparations for the 2022 Arnold Classic are underway. After witnessing the recent physiques of Breon Ansley, Terrence Ruffin, and Ramon Rocha Queiroz, the bodybuilding show is on track to be one of the most competitive yet.