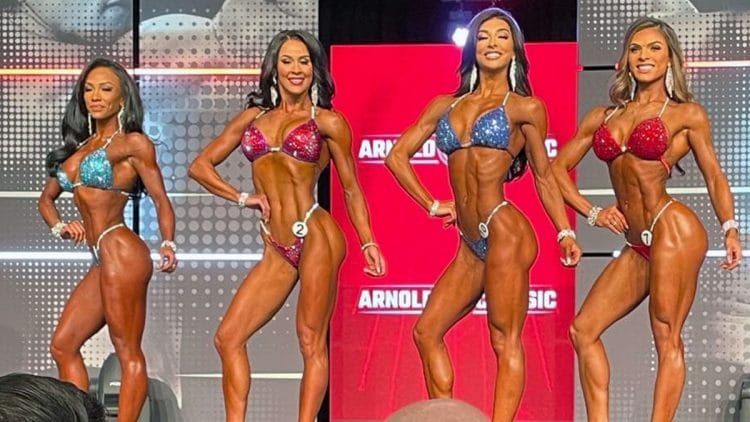 A stacked lineup of talent in the Bikini International division will face each other on stage at the 2022 Arnold Classic. Former Bikini champions Elisa Pecini, Ashley Kaltwasser, and inaugural Arnold Sports Festival UK winner Phoebe Hagan will meet in a highly competitive affair this weekend.

Last year’s Olympia winner Jennifer Dorie will not be participating at the Arnold this year. Meanwhile, Elisa Pecini has made improvements to her physique after coming in second at the 2019 Arnold Classic. Shortly after her runner-up appearance, Elisa won the Mr. Olympia Bikini Invitational later in 2019. Then in 2020, she showed improvements at the Arnold and secured first place. However, in Dec., judges perceived a drop-off in her physique as she ended up in fifth place at 2021 Olympia and will look to get back on track this weekend.

To the surprise of no one, the highly active Ashley Kaltwasser returns to the second biggest bodybuilding stage of the year. Ashley competed in a total of 14 NPC shows in 2021. Ashley competed at the Arnold Classic last year and ended up in fourth place. Additionally, the bodybuilder managed to land in third place at Olympia in 2021.

The Bikini Invitational is one of the most competitive women’s divisions in bodybuilding. Despite being newer to the scene, Phoebe Hagan is a threat to the Arnold title this year. After a successful 2021 season including a win at the Arnold Classic UK and a second-place finish at Legion Sports Fest Pro, many fans believe she can have a huge impact on the show this weekend when all is said and done.

Callouts one and three were identical, with Ashley Kaltwasser, Maureen Blanquisco, Elisa Pecini, and Lauralie Chapados all included. This lineup will likely be the top four at the show, but we won’t find out placements until the finals later tonight.

In callout two, Jourdanne Lee impressed the judges and has a chance to play the disruptor and break into the top-4 later at the finals.

After all, these call-outs who you think will walk away with the Arnold Classic Bikini Title? Be sure to check back FitnessVolt.com/arnold-classic/ for the finals which take place on Saturday, Mar 05, in the evening.