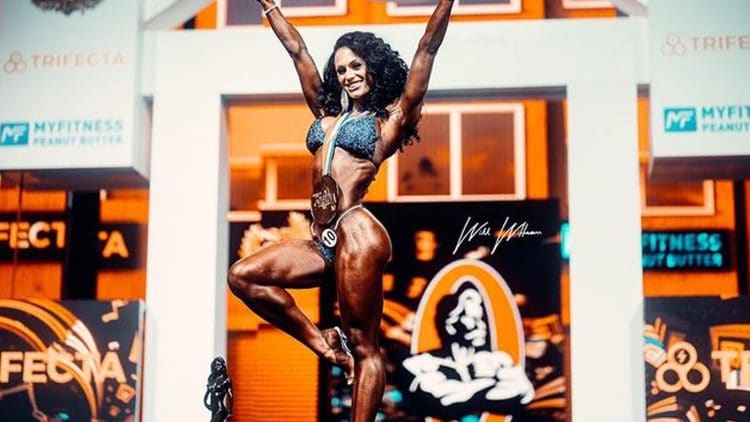 Jennifer Dorie wins the 2021 Bikini Olympia title! She earned $50,000 and a spot in the history books. The contest took place on Friday, October 8, 2021, during Olympia weekend at the Orange County Convention Center in Orlando, Fl.

This year there was no defending champion after 2020 Bikini Olympia winner Janet Layug chose to sit it out.

But Dorie would walk away with the biggest title of her career and it was well-deserved.

The Bikini division came about in 2010 when organizers saw the appeal in having a category of female competitors who didn’t quite carry the same level of muscle mass compared to say those in Women’s Bodybuilding.

Bikini has seen eight different Olympia champions since its inception, although two have repeated: Ashley Kaltwasser (2013-2015) and Angelica Teixeira (2017 and 2018). However, the latter was dethroned in 2019 by Isa Pecini who climbed the ranks.

But 2020 brought it the new champion, Janet Layug, who took third to both Pecini and Teixiera the same year at the Bikini International (Arnold Classic).

Pecini dropped to sixth at the 2020 Olympia while Teixeira fell to fourth place from her third spot finish the year prior. This just goes to show how difficult it is to stay at or near the top for these competitors.

Not to mention, Janet Layug chose to sit out the 2021 show and so there was no opportunity to defend her title which meant there’d be a new champ.

Jennifer Dorie was clearly one of the favorites going into the 2021 Olympia and brought a lights-out package to fend off a tough division and win the title.

Related: Bikini Model Workout – Siege The Stage With These Routines

It must be an other-worldly feeling to have scored her first Olympia win after taking the Bikini International title just a few weeks ago.

It’s also important to acknowledge all of the competitors from this division who showed up and gave it their all.