In addition to listing his top 10 for 2022 Mr. Olympia, "The King" gave a detailed breakdown of each of the contender's physiques. 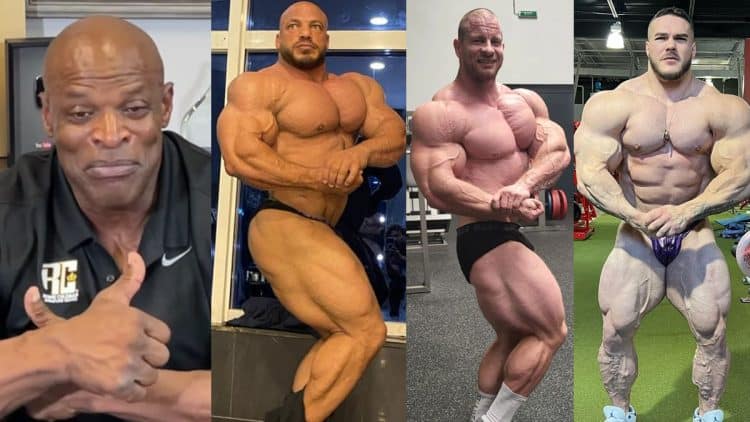 As an eight-time Mr. Olympia winner, Ronnie Coleman has developed a keen eye for the sport. In a recent video, the bodybuilding legend broke down this year’s Men’s Open lineup for 2022 Mr. Olympia and ranked them from one to 10.

During his reign, Ronnie Coleman was widely regarded as one of the best bodybuilders the sport has seen. He brought the size game to a different level and is tied with Lee Haney for having won the most Mr. Olympia titles at eight.

While he ruled the Men’s Open division with unequivocal size, he was eventually dethroned by Jay Cutler in 2006. Their rivalry elevated the sport and had a lasting impact on the generation of athletes that followed in their footsteps. Despite hanging up his posing trunks, Coleman remains a prominent figure in the sport, whose knowledge and opinions are sought after today.

The 2022 Mr. Olympia contest is less than 10 weeks away, which has prompted Coleman to discuss the lineup comprehensively. Already, this year has seen a number of newer athletes emerge. Among them is Andrew Jacked — he won back-to-back Pro shows and is headed to the Olympia stage this winter.

Earlier this year, the Men’s Open lineup received another infusion of talent when mass monster Michal Krizo switched from the IFBB Elite Pro League to the NPC. His plan was to add as much size as possible for 2022 Mr. Olympia but was tasked with having to earn his Pro card first. Over the weekend, he made it look relatively easy, winning the title at the 2022 Amateur Olympia Italy.

If Krizo wins a Pro show before the Olympia cutoff deadline (November 20, 2022), he will have the opportunity to compete against the sport’s best later this year. And judging by Ronnie Coleman’s assessment of Krizo, he thinks the Slovakian will not only qualify for the event but even place in the top seven. Take a look at Coleman’s Men’s Open breakdown for 2022 Mr. Olympia.

Coleman starts with Nick Walker, who he believes has great shoulders and arms.

“He has pretty decent v-taper. He’s got great shoulders and great arms. As far as his chest — he got a decent sized chest just needs to be a little bit wider. For the most part — yeah, he needs to work on his conditioning and [then] he’s going to do pretty good against these current competitors,” says Ronnie Coleman.

In Coleman’s opinion, he believes Hunter Labrada would benefit from better biceps peaks and more wideness to his back.

“Hunter, he’s got a pretty decent v-taper here. I think he needs to work on his separation and he’ll do pretty good. His back, probably needs a little bit more width on it. His arms could use a little bit more peak.

I think once he gets his separation going, once he works on his hamstrings, he’ll have some nice hamstrings. But for the most part, he got a pretty good wide back but he probably needs to be just a little bit more wider because his v-taper isn’t all that good right now,” Ronnie Coleman explained.

While Coleman appreciates Blessing Awodibu‘s aesthetic structure, he says he needs more mass on his upper chest along with more roundness/separation in his arms and legs.

He’s got great ab shots, great side serratus shot there. He probably needs more separation in his legs from the front there. A lot of trap work. His traps aren’t too good right here but I think if he can get his traps up, get some roundness on him arms, a little bit more separation on his legs — he’d be pretty good there.”

Despite the hype and fan support behind Michal Krizo, Coleman believes he has some work to do. He added that his big arms are throwing off the balance of his physique.

“Michal Krizo — this is the new guy right here. Krizo got some freaky arms right there. Nice and big chest, he needs some width on it, I’d say. I don’t see a lot of width on his back — that’s not a good back shot right there. He don’t have a v-taper going right there [on the back]. Now, I see, he has arms though, but they are kind of throwing off his physique.

He’s got these big ol’ arms, big forearms, but I think once he gets his back to be a little bit wider, he’ll have a real awesome physique.”

According to “The King,” Hadi Choopan has the tools to win Mr. Olympia. He sees “great things ahead” for Choopan and said he’s not far from winning a Mr. Olympia contest.

“Next guy up: my friend Hadi Choopan. Hadi’s got a real nice v-taper there, you know I like that a lot. Nice shoulders right there, nice traps and everything on him. Nice arms on him. I think once Hadi gets his arms to be a little bit more round, he’ll have a great physique. Not too much bad going on here.

He’s got a real separation in his legs, striations in his legs like Jay [Cutler] got. Hadi — I see great things ahead for him. This guy can probably win the Olympia once he puts it all together. He’s not that far off at all. Hadi… keep it up my man,” says Ronnie Coleman.

Coleman doesn’t see anyone getting in the way of Big Ramy‘s third title defense this year. He says no one has the size to stand up to him and went so far as to congratulate Ramy on his future victory.

With all this size, and the great v-taper he got here, biggest shoulders you’ve ever wanted to see — I don’t see nobody taking him out — nobody at all. So, Big Ramy, congrats on your third Olympia my friend, I think you’re going to take it again.”

Ronnie sees William Bonac as a dark horse in the Olympia lineup. With a number of great physical attributes, Coleman believes Bonac could win Mr. Olympia with a thicker back. He predicted that “The Conqueror” will do some ‘real damage’ this winter.

This guy could be unstoppable. He’s got nice peaks from the backs of his arms, he’s got a good Christmas tree right here — he’s got a nice wide back, yeah I think he can do some real damage.”

Before ranking his top 10, Coleman gave his thoughts on Andrew Jacked and how he will fare at Olympia later this year.

“Andrew has a nice physique going here. He’s got nice arms on him. The only thing I can tell he needs to work on is his back. That comes in time. As you can see, he’s got a nice back shot right there. You get that bad boy separated and a little bit more thicker in his upper back — he will be hard to beat.

He’d probably kill these guys in these Open shows they got. But yeah, Andrew Jacked’s got it going on.” Ronnie Coleman shared.

This isn’t the first time Ronnie Coleman has been asked about his 2022 Mr. Olympia predictions. In the past, he mentioned that Nick Walker and former 212 Olympia winner Derek Lunsford were valid wild cards heading into this year’s contest. However, he also stated that Big Ramy will likely retain his title for the next three or four years.

Given the recent wave of newer talent, Coleman’s longtime rival Cutler suggested that 2022 Olympia has the ingredients to be one of the greatest contests ever. Though, if you ask Coleman, he doesn’t see the results changing much from last year’s show.