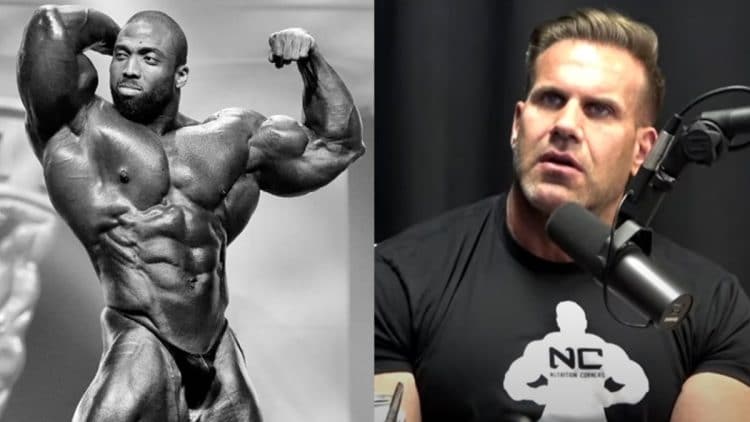 Bodybuilding legend Jay Cutler remembered late Cedric McMillan in the recent episode of his Cutler Cast podcast. Cutler is a 4-time Mr. Olympia winner and he was one half of arguably the greatest competitive rivalry in the Open Pro division. Cutler’s win as Mr. Olympia in 2006 ended Ronnie Coleman’s eight-year reign. During the April 22nd episode of the Cutler Cast podcast, Jay Cutler shared his thoughts on the late Cedric McMillan and spoke candidly about a wide variety of topics from PED use to the correct age to retire from competitive bodybuilding.

2017 Arnold Classic winner Cedric McMillan passed away on April 12th, 2022 at 44 years of age. McMillan was hailed as one of the best bodybuilders of his generation. However, he was forced to sit on the sidelines due to health issues. He was hopeful to make a comeback to competitive bodybuilding in 2022. However, his sudden demise snatched the opportunity from him.

Jay Cutler remembered that he had some great run-ins with Cedric McMillan and one of Jay’s coaches trained McMillan when he earned the pro card. While describing Cedric McMillan’s personality and place among the bodybuilding community, Jay Cutler said:

“He was a good old boy from South Carolina, you know. He was a big figurehead in our industry and he was someone people looked upon. And He was one of the big aesthetic guys and probably one of the best physiques we have seen in quite some time. It’s just always very hard to peak perfect. I remember when I saw him in the Nationals, I just said like this guy could be like the next Ronnie Coleman.”

A lot of people attributed Cedric McMillan’s passing to the bodybuilding lifestyle. Jay Cutler drew attention to the fact that McMillan was a 300lbs individual in his mid-40s. Historically, some bodybuilders have won the Olympia crown in the late 30s and in 40s. However, such cases are far and few. Cutler opined that competitive bodybuilding at that age might not be a safe choice irrespective of how the individual approaches the training and everything that comes with it.

“I’m just gonna state what my thought on all this is, okay. I’ve said it before. You know bodybuilding used to be a young man’s game… Chris Dickerson won Mr. Olympia at around 40. Obviously, we saw Shawn Rhoden win (Mr. Olympia) at 43. There’s not to say you can’t do it. But is it suggestive to be a competitive bodybuilder on that level into your 40s? I think not.”

“This business… I just still think you should look at it as a younger man’s game. And I think that’s why so much appeal is looking at Classic Physique because a lot of the top guys are in their 20s right?”

Cutler is a 4-time Mr. Olympia winner and has a tremendous amount of experience competing at the elite level of bodybuilding. Based on his experience of dealing with the physical and mental stress that accompanies competing against the best, Cutler stated that guys in their 40s and 50s should stay away from the top-tier competition.

“Not to say that it’s bad to get ready for a bodybuilding competition but the professional top tier – Mr. Olympia level – I’m not so sure about it,” Jay Cutler said.

“You have to put yourself in this dark place” – Jay Cutler

Speaking further about the stress associated with competing at Mr. Olympia and more importantly, defending the Olympia crown, Jay Cutler shed light on his mindset a few weeks before the competition.

“Two or three Olympias I’m like, ‘why do I do this?’ It shouldn’t be like that. You’re the best in the world at what you do. I was trying to defend the title and I was dehydrated to the point where my mind just wasn’t there. It was always the dehydration process that was the hardest for me.”

Jay Cutler added that the defending Olympia champion has to deal with high expectations and ‘you have to put yourself in this dark place for like the two to three weeks prior to the show’ in order to bring the perfect physique on stage.

“We all have to do it. It’s not like its only bodybuilding. When you talk about these people that build their business and they work in their office all day… you have to sacrifice. You have to have that head space. That’s the one thing is… certain people are not capable of going to that place,” Jay Cutler said.

The labors of bodybuilding have taken a toll on many bodybuilders’ health. However, Jay Cutler was able to go through his career without major injuries and did not face the consequences of a bodybuilding lifestyle post-retirement. Along with genetics, he attributes this to be cautious with diet, health monitoring, and moderate use of PEDs even at the peak of his career.

Jay Cutler opens up about PED use

Using performance-enhancing drugs (PED) to build the abilities beyond natural potential is an integral part of competitive bodybuilding. However, very few bodybuilders ever touch upon the topic and even fewer share the details of the drugs or doses they use/d. Jay Cutler is among those select few bodybuilders who opened up about their steroid cycles candidly.

While discussing the issue of steroid abuse, Jay Cutler and Matt argued that while the use of PED has exponentially increased in recent years, a lot of individuals use them as a compensating factor to the lack of discipline in training, diet, and overall lifestyle. The duo concluded that the misinformation about steroids has compelled a lot of people to believe that using massive amounts of PED is the only way to achieve competitive and fitness goals.

“We were eating with (some PED users) overseas and they showed us what they were taking. I don’t even know how you can even fit that much in your body. It was so ridiculous. It was triple of what I had heard anyone even taking and this person was 230lbs. I don’t understand why people… You’ll see a Men’s Physique guy and they’re like ‘I’m taking a 1000mg of this and 1200mg of that’. I’m thinking I know a 300lbs guy that didn’t even take 200 or 300. BUT they slept, they ate, they trained their ass off and didn’t do all these other things.”

“I don’t know what the one thing there is to blame but there is a lot of misinformation and everybody thinks if somebody is bigger and better, that means they’re taking more and that’s just not the reason,” Matt said.

Jay Cutler advises to do blood work on a regular basis

Getting the blood work done regularly is an effective way to figure out possible health risk factors and address them in advance. This is more important for competing athletes and those that use PED or Hormone Replacement Therapy. While speaking on the topic, Jay Cutler advised doing the blood work every six months. The cost associated with the blood work is of the primary reasons people avoid getting it done.

“You guys out there avoiding it because of the cost, I mean for a while be honest… you probably thought it was expensive right?” Jay Cutler said.

Courtesy of the Cutler Cast YouTube Chanel, you can watch the full podcast episode here: