Bradley Martyn received 10 stitches inside of his mouth as a result of his latest bench press stunt, where a young woman fell on his face. 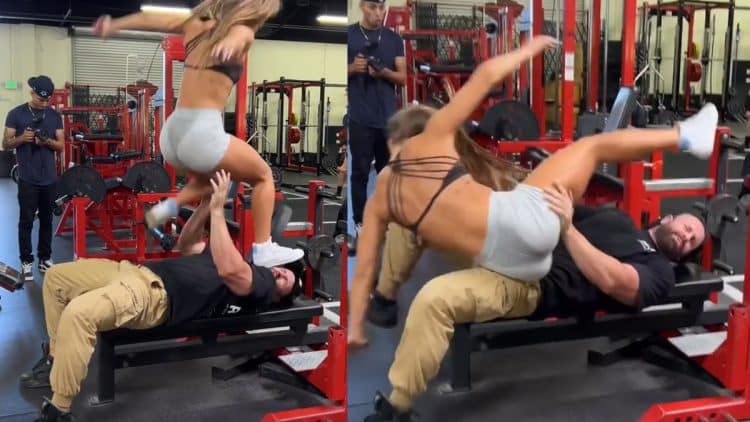 Social media star and bodybuilder Bradley Martyn got more than he bargained for after one of his latest gym stunts resulted in injury. In a post made to Instagram, Martyn showed off the maneuver that led to him getting 10 stitches put inside his mouth.

During the video, Bradley is seen lying down on a bench, but instead of pressing traditional weight, he lifts a young woman in the air by balancing her on a weight plate he held in his grasp. While he’s able to lock out his elbows and suspend her into the air successfully, chaos ensued after she lost her balance attempting a squat.

This was far from the first time that Martyn attempted a nerve-racking gym stunt. These wild stunts have helped him amass an audience of over four million followers on Instagram and more than three million subscribers on YouTube.

Another bodybuilder known for his jarring strength is eight-time Mr. Olympia Ronnie Coleman. Recently, the decorated Pro gave his thoughts on some of Bradley’s craziest feats of strength, one of which involved Bradley pressing a young woman like a dumbbell, however, no injury occurred during that routine. This time, he wasn’t so fortunate.

Check Out Bradley Martyn’s Face Injury Following 12 Years of Stunts: ‘I Finally Got Got’

In a post made to Instagram, Bradley first shows off the accident that led to several stitches inside of his mouth.

“How it feels when you drop your phone on your face 😂” Bradley Martyn wrote.

In the comment section, Bradley revealed that he needed a total of 10 stitches after the woman’s shoe clobbered his face. Fortunately, Martyn didn’t lose any teeth following the painful accident. He added in a separate Instagram story, “Posting in 5 min how I destroyed my face, it’s been 12 years since I been filming stupid lifting videos. I finally got, got.”

The cut, which looks over an inch long, was sewn up successfully, and Martyn thanked the West Hills ER for the handiwork.

Before testing his fate with gym stunts, Martyn was an amateur bodybuilder. He first competed in the sport back in 2011, when he won his amateur debut at the NPC Southern California Championships. While he no longer competes actively, one of his most significant victories saw him earn gold at the 2013 NPC Phil Heath Classic.

Here’s another angle of the same video:

For those of you asking to see the other angle…enjoy 😂

The last time we saw Bradley Martyn in action, he was training beside Arnold Schwarzenegger‘s son, Joseph Baena. The two discussed Baena’s addiction to the gym while getting a pump.

Replying to @spillthetgirl this is what I was expecting. Two things I did wrong here. Have her spin around and use a bumper plate. 🫡

RELATED: Bradley Martyn And Tristyn Lee Have Killer Arm And Back Workout Together (VIDEO)

Despite the accident, Martyn will likely resume his crazy feats of strength in due time. As always, it is impossible to predict what Bradley Martyn will have up his sleeve next.

How To Do Seated Leg Raises – Tips, Benefits, Variations and Muscles Worked