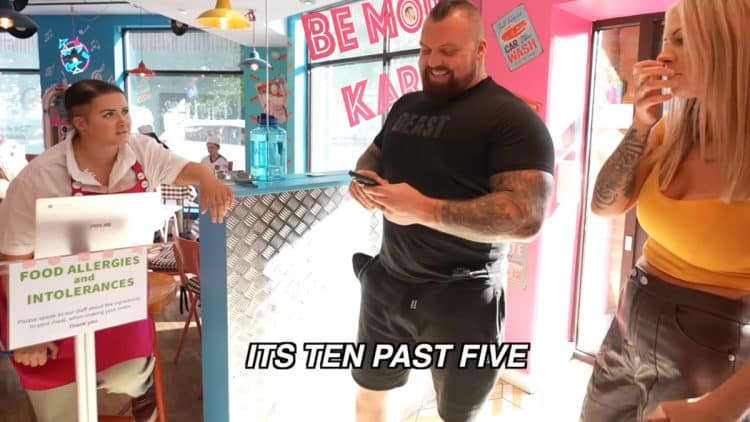 Eddie Hall is widely considered to be one of the best Strongman athletes of all time. His unparalleled tenacity earned him the nickname “The Beast.” In a recent video posted on his YouTube account, Hall visited Karen’s Diner, known as the world’s rudest food establishment.

Hall racked up various insanely impressive lifts during his prime. He set the World Record after becoming the first person ever to deadlift 1102 pounds (500 kg). He held the record until his archrival Hafthor Bjornsson ultimately broke it with a deadlift of 1104 pounds (501 kg).

Hall’s physical abilities saw him win the 2017 World’s Strongest Man title, but his skills go beyond just one sport. After stepping away from competing as a professional, Hall chose to turn the heat up on his fierce rivalry with Bjornsson. In March, they agreed to settle their differences inside the boxing ring. The exhibition match got billed as “The Heaviest Boxing Match in History,” which took place in Dubai, United Arab Emirates.

Hall and Bjornsson both took the grudge match seriously and lost weight to prepare for the enduring six-round bout, which would likely require endurance and stamina versus pure strength. Bjornsson managed to come out on top of their contest after going the full distance by unanimous decision. As a result of losing this boxing match, Eddie Hall was forced to get a “World’s Strongest Man Hafthor Julius Björnsson” tattoo. He decided to ink the side of his foot weeks following the defeat.

There was speculation about a potential rematch between the two strongman but it does not look like it will happen anytime soon due. Hall is set to make his comeback in a special event after retiring from Strongman in 2017.

Hall will captain Team UK during the first ever 2022 Giants Live World’s Strongest Nation event. The show is scheduled for Nov. 26 at the M&S Bank Arena in Liverpool, England.

In a recent video posted on his YouTube account, Eddie Hall visited the famous Karen’s Diner in Manchester, England for his wedding anniversary. The diner is famous for being the world’s rudest restaurant, where the servers talk rudely to the customers.

Upon entering the joint, Hall was told he had to stand against the wall for coming in five minutes late for his reservation.

“Go stand against the wall and think about what you’ve done. I do not appreciate your lateness.”

The servers threw the menu on the floor next to Hall and walked off. Everyone including Hall got together to boo the new patrons who were vegetarians.

They gave Hall a hat that had the following words written on it.

“They’re genuinely good. Where do they get these people from? They’re spot on.”

Hall was deemed as the person with the “sh*ttiest” outfit by a kid who won a spin the wheel game. He was also given a coloring sheet to draw on and instructed to keep it in the lines.

Hall was chosen to arm wrestle with a child and after losing to her — Hall was labeled ‘p*ssy’ by the crowd.

Hall’s decision to visit Karen’s Diner came after the establishment gained popularity on the internet for its rude staff. While some may want a relaxing meal, Hall seemed to enjoy the special treatment he received at the place. In the end, he expressed a desire to visit the restaurant again but without filming.

RELATED: Eddie Hall Teaches His 10-Year-Old Son How To Perform His First Ever Deadlift